When insulin resistance tried to take over his body, Ajay educated himself about nutrition and training and then transformed into a fitness machine!

Until 2010, I lived an unhealthy lifestyle that led to me developing insulin resistance. This condition is the precursor to developing type 2 diabetes and a whole host of other health problems, including cardiovascular and kidney disease.

A snide remark by an acquaintance about my weight struck a chord and fueled my desire to change. Everything else in my life was going well, so I was determined to not let obesity and diabetes take over. I figured that if I could do well in my career, then getting healthy would be just as easy.

I couldn't have been more wrong.

Being insulin resistant makes following conventional nutrition wisdom difficult. A majority of well-known diets cater to people with normal glucose metabolism. So concepts like carb-loading wouldn't work in my body. Having impaired glucose tolerance required me to learn how to time my carb-intake for optimum blood sugar control, a key requirement for getting lean and adding muscle. The start of my journey was an uphill climb and very frustrating.

I learned a lot, though. I realized I could not beat the disease at its game until I understood it completely. As Sun Tzu says in The Art of War : "If you know your enemies and know yourself, you will not be imperiled in a hundred battles." Armed with knowledge, I lessened my body's insulin resistance. Today, Im no longer insulin resistant. I won!

Initially, I made the mistake of a severe calorie deficit coupled with hour upon hour on the treadmill. I did lose weight, but not the right kind. I lost a huge amount of muscle on my lower body and ended up skinny-fat. It's a mistake I'm still paying for today.

Despite my hard work, I wasn't happy with myself. I decided to change things and do it the right way this time. I began by learning about fitness and researching what I needed to do to reach my goals. Bodybuilding.com helped me do this. The vast amount of information in the articles and forum discussions slowly helped me grasp the nuances of fat loss and muscle gain.

Then I addressed being insulin resistant. I read a lot about type 2 diabetes so I could understand what was going on in my body. I was able to intervene and manually compensate by timing my carb intake to modulate my natural insulin response as much as possible. The timing, though, had to be perfect.

I wanted to add lean mass to my skinny-fat frame and spent 12 months on a high-protein, low-carb, and low-fat diet. I timed my carb intake around workouts and slowly added 10-15 pounds, although it wasn't entirely fat-free.

My fasting blood glucose and HbA1c (average blood-glucose level over 8-12 weeks) were beginning to drop to the high end of normal. The doctor's exact advice was: "Continue doing whatever it is that you're doing!" 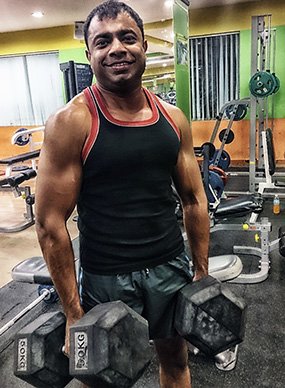 Starting May 2012, immediately after that "before" picture was taken, I began a cut program to lose some of the fat. I began a Ketogenic diet, where carbs are so low that your body has no choice but to burn body fat for energy. My body couldn't process carbs efficiently anyway, so by cutting them out of my diet, my body's hormonal systems more or less returned to that of a normal dieter. Soon, I began to respond to mainstream fitness advice. Fat began to melt off, and over the course of the year my body fat went from 25 percent to 13 percent.

My personal life during this year took a beating as well. It was almost as if it was trying its best to derail my efforts. I was fighting a bitter divorce and a child custody battle. Many times I wanted to just give up and use food as an emotional escape, but somehow I clung on. I did have my weaker moments and once in a while ate what I wanted and had a drink or two, but I always jumped back on the next day. One year later, here I am.

I still have a long way to go with my ultimate goal being about 170 pounds at about 10 percent body fat. It's a journey that I know may take another two years or more. But now that I'm armed with knowledge, I probably won't stumble too much.

My last HbA1c was 4.5, which is actually quite low.

I'm immensely happy for having taken this path. I look better, and have greatly renewed confidence and a zest for life. More than anything, I'm thankful for the reprieve this has provided me from contracting diabetes.

As I had read in numerous sources and on Bodybuilding.com, my strength and size came in alternating waves. So training for both gave me the results that I wanted. I highly recommend the same for anyone wanting to get the benefit of both programs.

Due to myriad information available, it's easy to get confused. Just remember these basics:

Until recently, fitness in Malaysia and India was more focused on sheer mass and bulk. The aesthetic, lean look is just now catching. Diets focusing on fat loss and lean mass gain and retention are now gaining prominence.

It looks like the industry is now headed in that direction. Supplements and gyms are now becoming accessible to everybody—they're no longer limited to professional bodybuilders.

I'm heavily indebted to my personal trainer, Mr. Karthickeyan Arumugam from Fitness One for his perseverance, patience, passion, and belief. He's helped me achieve my fitness goals and get a body that I could only once dream of. Thank you Karthick for laying the foundation!

Do you live outside of the United States? Have you made a dramatic change either by gaining muscle or losing fat? If so, send in your pics, stats...