Well-meaning people believe it's their duty to 'take care of the old folks,' to give them an easy time in their last years. I'm here to tell you how it should be and hope to fire you up in the process!

I recently received the following response to my articles on aging and training:

"It is so encouraging to learn that you/we can create muscle mass at an older age and progress in bodybuilding or strength training. I get excited just reading about it. The old mythology told us to "give it up' as we age. Your dedication and success are so inspiring and are a great kick in the butt for me. There really is no excuse not to try. Thanks for that too."

That message fires me up to kick more butts off the couches and rocking chairs and into the vibrant, vital life of bodybuilding. It validates my writings. You all know the myth of which he writes. 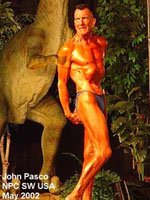 Click To Enlarge.
That Message Fires Me Up
To Kick More Butts Off The Couches.

Well-meaning people believe it's their duty to "take care of the old folks," to give them an easy time in their last years. Their understanding is that anyone who gets up in years should have less vitality because bones, muscles and nerves are tired and need rest. "He's paid his dues," they say. "Now we should see that he enjoys some leisure in the years (months?) he has left."

Well-intentioned, charitable agencies similarly feed that myth. For example, the church I attend has a program to build a "retirement center" for seniors. It's full of concepts that are intended to make life easy for the residents.

I've advanced the idea that while some seniors do need caregivers, the plan should include assisting capable residents to become rejuvenated through a vigorous exercise program. My offer has been met with absolute silence. It's my suspicion that it's more satisfying for them to make life easier for the "old folks" than to promote their physical, mental, social rejuvenation.

Get the full article in the October edition of Iron Man Magazine. Complete article contains more about the myth that many believe of 'OLD' age.

Iron Man Magazine will now be sharing information with Bodybuilding.com. Make sure to check back here often to see what has been posted.