Every athlete has a story, but Lolo Jones’s is especially inspiring. Learn how she’s overcome a lifetime of adversity to become one of the USA’s most celebrated hurdlers.

American Track and Field sensation Lori "Lolo" Jones has quite a story. Aside from tripping on the penultimate hurdle in the 2008 Olympic 100 meter final (which would be enough to make anyone want to throw their spikes into a lake), her life has been full of adversity and challenge.

But that's the incredible thing about Lolo - she doesn't quit. Her lifetime of struggle has made her battle-hardened and ready to win at the London Games.

The Low Down On Lolo

Although she doesn't yet have an Olympic medal, her list of accolades is long.

Among her claims to fame, she has won two World Indoor Championships, three NCAA National Championships as an LSU Tiger, holds the American record for the 60 meter hurdles (7.72), and has been touted by ESPN as having one of the hottest 50 bodies in sports.

Beautiful and talented? This girl has it all!

As a child, Lolo and her family moved around frequently: She attended eight different schools in as many years. Her single mother held down two jobs to support a family of six.

At one point, Lolo and her family had to live in the basement of a church in Des Moines, Iowa.

"It was tough living in a basement," said Lolo. "Other kids would tease us, so sports and athletics was my escape. I could get away from it when I ran and I knew that every time I ran or trained I was getting closer to reaching my goals."

That focus and determination would eventually result in her setting an Iowa State high school record in the 100 meter hurdles and being named Gatorade Midwest Athlete of the Year.

After high school, Lolo went to LSU where she earned a degree in economics and 11 All-American titles.

She failed to qualify for the 2004 Athens Olympics and had to choose between the sport she loved and having a real career.

Lolo explains, "It was a tough decision. I could have gone with the stable career that my degree would have helped me get, but to get so close and give up was something I couldn't do. I wanted it and needed it."

Instead of ending her hurdling career, Lolo decided to work part-time and turn off her air conditioner during the Louisiana summers to earn and save money to compete.

She did well for the next few years. She won National Championships in 2007 and 2008 and also won the 60 meter World Title in 2008. She was ready to compete in the Beijing Olympics, and the pressure was on.

Lolo was favored to win the gold, but her mistake in the final race cost the medal she trained for. Despite her disappointment, Lolo got up, showed incredible class and sportsmanship, and started preparing for London. 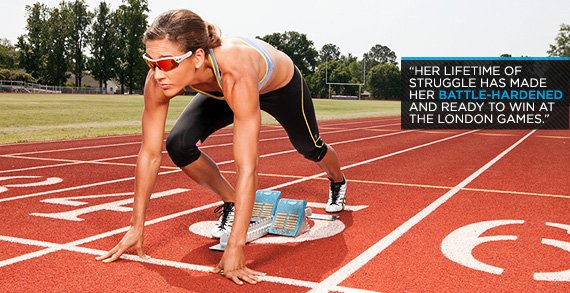 A hurdle in track and field is 33 inches high. In the 100 meter event, you have to clear ten 33-inch hurdles faster than your competition. If you want gold, you need to know each and every step of those 100 meters, and you need to clear the tenth hurdle as easily as you cleared the first.

Lolo Jones knows her race. She's been training for it. She trains five days per week with weights, does sprints, focuses on Pilates and completes tempo runs. "I have never trained for anything harder in my life. I am so close to reaching my goal I had spent years dreaming about and working for. I can't go to London without knowing I gave this everything I had."

She must win and, as far as she can tell, she will.

"Twinlab has been around for decades and you can't stay in business that long without knowing what you are doing. Obviously, they have great products and I know that I am taking what is on the label. I can train as hard as I need to."

To learn more about Lolo and her quest for 2012 Olympic Gold, go to runlolorun.com and TwinlabFuel.com. You can also find her on Facebook at Facebook.com/followlolo and follow her on Twitter @lolojones.