How To Win The Spartan Race World Championships

The Spartan World Championships represents more than the fastest, or the strongest, or the competitor with the greatest endurance. It represents a uniquely human kind of fitness.

Grit is a powerful word. It evokes an image of clenched teeth and petrified knuckles. It's a word that pulls one's lips together in a growl. It's a symbol of perseverance. And it's the word that inspired Joe De Sena to found the world's most successful obstacle race company, Spartan Race, in 2008.

After six years packed with hundreds of races and millions of mud-covered sneakers, Spartan invited all modern Spartans of the world to assemble at Mount Killington, Vermont, for the second annual gauntlet of human endurance: the Spartan Race World Championships.

Over 10,000 racers, elite and ordinary, arrived at the race site from countries all around the globe on the weekend of September 21st. We take a closer look at three of these elites: top finishers Matt Novakovich and Hunter McIntyre, and the new Spartan World Champion, Jon Albon.

Our question is simple: How did these three men subdue the Killington Beast?

Rising To The Challenge

Of the countless challenges the Spartan Races pose, the most basic ones are physical: the obstacles and the space between the obstacles. Let's start with the story of Matt Novakovich, a 40-year-old father of four revered as "The Bear" among his rugged Alaskan neighbors and the Spartan community. Although he finished 40 minutes after the world champ, he carries the inspiring title of "Fittest Man Over 40" for winning first in his age group. Like the hundreds of spectators who saw him blast through the course in Killington, we have to ask: Why is this 40-year-old from Alaska doing so well? 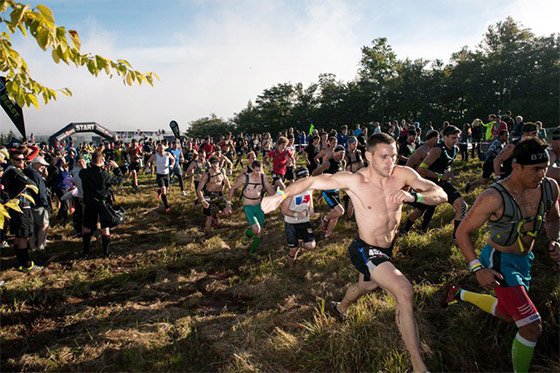 Of the countless challenges the Spartan Races pose, the most basic ones are physical: the obstacles and the space between the obstacles.

The answer lies in his heart. Literally. Novakovich swore off running years ago due to chronic injuries, but he finds he can achieve equivalent, if not better, cardiovascular fitness through a careful blend of intense but low-impact exercises. Namely, he climbs 5,000 to 10,000 vertical feet on a treadmill with a heavy incline and an even heavier bucket of gravel—70 pounds, to be exact.

On more intense days (if you can fathom such a thing), The Bear mixes sprinting with burpees and lunges in a workout he learned from Joe De Sena himself. These harder workouts, Novakovich says, "strike fear into my heart every time."

Hunter McIntyre takes a different approach. A CrossFitter and kettlebell devotee, McIntyre emphasizes strength in his workouts. "It really gets me going to get some heavy weights on my shoulders," he says. "That's when I look into the mirror and think, 'That's an animal.'" Don't be fooled; McIntyre explains that he always brings "a very brutish and macho attitude" to his training, but not in an aggressive way. "It's just how I feel alive," he says. And apparently McIntyre is not only an animal, but an amphibian: To complement strength with cardio, he swims laps and lifts dumbbells in the pool. 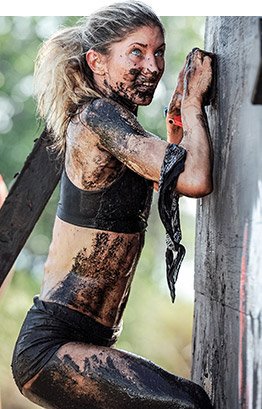 Mental toughness is surely the force that carries racers over, under, and through the obstacles of the course.

So The Bear climbs, and McIntyre Crossfits. What about the relatively obscure young man from the UK who blew both of them out of the water? First-place winner Jonathan Albon offers simple advice for anyone hoping to pin the Beast: "Run a lot of hills."

And it should be no surprise that he practices what he preaches. Albon's favorite way to train is to take a long, slow run in the mountains of Bergen, Norway, and just lose himself.

Lately, he has averaged about eight miles per day. When he's not bounding up the stone stairs of Mount Floyen, Albon enjoys orienteering for cardio, bouldering for his grip, and circuit training for muscular endurance and strength.

It seems that doing well in a Spartan Beast takes sheer brawn as well as a strong heart, but crushing obstacles can't happen without the proper mindset. Mental toughness is surely the force that carries racers over, under, and through the obstacles of the course.

What goes on in the brains of these giants?

At the starting line, Matt Novakovich and Hunter McIntyre use controlled breathing techniques to block out psychological noise. Aside from doing box-breathing exercises, McIntyre tries to remove himself from the actual race, blocking out any outside influence. Amidst the brouhaha of the minutes before the air horn, McIntyre says, "I try to get into my own mental space."

Novakovich adds a stoic note: "[The race] becomes psychological. A lot of people get psyched out, but I can't control what [my competitors] are going to do. All I can control is what I've done to get here." In a Spartan Beast, the competitors are as unpredictable as the obstacles. If you're going to stand a chance, you've got to keep your head above the hype.

But even with all of their fitness accounted for and their minds reined in to the nexus of self-control, Novakovich and McIntyre fell short of their goals. As with many competitions, the factor that makes or breaks a Spartan Race champion is strategy. McIntyre failed despite his ample training and formidable ambition. His explanation? "I picked the wrong pace. Up until 45 minutes from the end, I thought I had all my ducks in a row." But then, a time split that was just a little too late for comfort sent McIntyre into a panic. The adrenaline may have helped, but unfortunately it only carried him to 5th place.

Novakovich also blames poor strategy. After trying to farmer's-carry two 45-pound sandbags uphill in one trip, his hands were "completely toast" and his grip-strength "destroyed." Clinging to the monkey bars that followed was out of the question, and this set him back considerably overall. 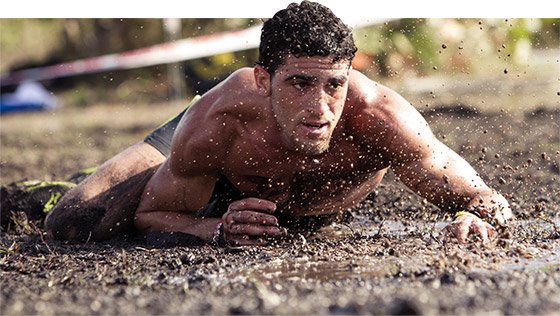 Modern Spartan grit is simple: it's the ability to persevere through unpleasant challenges in the hopes of achieving some long-term goal.

Although it's impossible to know exactly which obstacles a Spartan Race will hurl in your direction, or in which order they will appear, it's always possible to "know thyself." Winning the Spartan World Championships requires self-knowledge above all else; you have to know how much you personally can handle of any obstacle at any time, and plan accordingly.

McIntyre, Novakovich, and Albon each bring a different personality and a different set of skills to their competition, but what catapulted all of them to the finish line is the soul of the Spartan philosophy: grit. Modern Spartan grit is simple: it's the ability to persevere through unpleasant challenges in the hopes of achieving some long-term goal.

The Source of Grit

Where does their grit come from? McIntyre, for one, attributes his grit to his competitive nature and what he describes as his religious devotion to fitness. "It is something that grounds me; it's never going to fail me," he says. 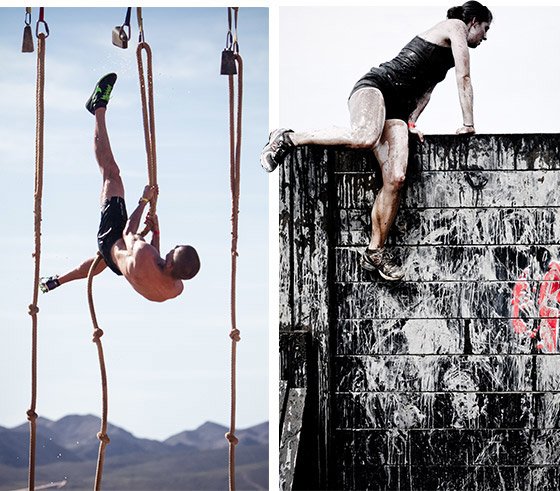 Where does their grit come from? McIntyre, for one, attributes his grit to his competitive nature and what he describes as his religious devotion to fitness.

Novakovich got his grit from the brutal Alaskan wilderness. "I've been charged by bears that I've had to kill or be killed, I've fallen in rock slides, avalanches, and been lost—cold, wet, and without food." According to The Bear, the struggle of a Spartan Beast doesn't even register on his pain scale.

In light of these two near-winners' attitudes, Albon's must be godlike, right? Exactly the opposite. Anyone who meets Jon Albon will be surprised (and perhaps relieved) to learn that the fittest man in the world is also the most down-to-earth. Although Albon rose from relative obscurity to the pinnacle of Spartan glory in an impressive 3 hours and 23 minutes, his ego stayed as light as his Inov-8 sneakers. Was he nervous at the starting line? "Not particularly," he says. "All I knew was that [the race] was going to be long. I was interested to see where I would fit in."

But what about grit? What about mental toughness? From the huge number of endurance challenges he has completed, as well as the ones he failed to finish, Albon has learned some golden rules that seem counter to the typical image of grit. After his DNF (Did Not Finish) at the Spartan Death Race, for example, Albon's mantra became "Relax! Don't get overwhelmed. Just think." Relaxation is surely helpful, but how exactly does Albon carry on through the toughest of the toughest moments? "I don't really know," he says. "I just don't see an option not to carry on."

Sometimes that's all we can say. 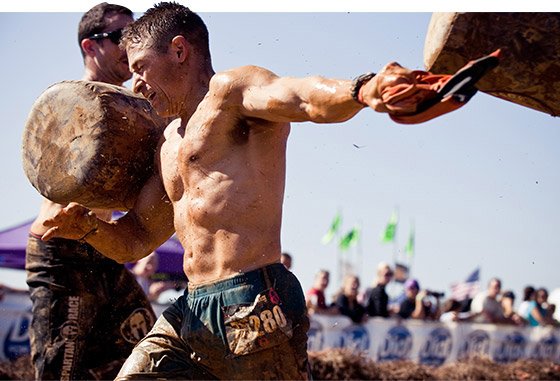 You can do just as well in anything, even a Spartan Race World Championship, without the ego.

Right now, Albon has no concern for fame; for him, success is about enjoying life and living happily, rather than making money. After he sees where he fits in at the upcoming Dragon's Back and the ultra at Mont Blanc, he plans to find a job and get to work. In this way, Albon can remind elite athletes and fitness enthusiasts alike of an invaluable life lesson: You can do just as well in anything, even a Spartan Race World Championship, without the ego.

You'll Know at the Finish Line

Joe De Sena launched Spartan Race to find paragons of grit. So far he has found a Bear, an unspecified amphibious animal, and a humble man from the UK whose success even he cannot yet explain. To compete among the elite in such a test of total endurance takes the grit and dedication of a soldier, but the Spartan World Championships represents more than the fastest, or the strongest, or the competitor with the greatest endurance. It represents a uniquely human kind of fitness. In Albon's words, "We were made to jump over stuff, run, get muddy, go outside. The best caveman would be a really good obstacle racer." 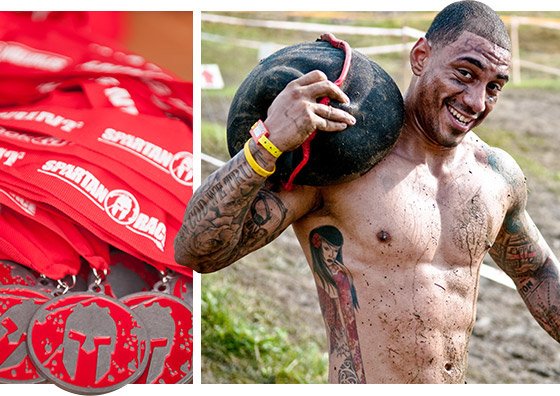 The Spartan World Championships represents more than the fastest, or the strongest, or the competitor with the greatest endurance. It represents a uniquely human kind of fitness.

No sport is more accessible to the human body than this one. The champions themselves relish the fact that people of all shapes, sizes, and athletic backgrounds can run this race. "The person who finishes last is having just as much fun as the person finishing first," says The Bear. "With a sport like this, you just put on your shoes and go. There are no barriers, and no excuses."

Spartan invites people of all ages and life experiences to throw away their excuses and discover their inner strengths. The World Championships is by no means a final destination for the Spartan elite alone; it's a demonstration of the kind of complete fitness a person can achieve just by exploring the natural world. It's an opportunity to test one's fitness and identify one's weaknesses. But, most of all, it's a celebration of life lived to its fullest without the words, "I can't."

You don't have to be a CrossFitter to apply some of their strategies for mental toughness to your own workout. Here are three tips to develop a stronger mind and a better physique!

The Spartan is no ordinary race. You'll need to lift heavier, run faster, jump higher, and compete smarter than ever before just to survive. That's where we come in.