Body Transformation: How Gene Got His Groove Back

Bad eating habits and no exercise made Gene heavy, but not for long. Learn how he got strong, fit, and back in the game!

I was in pretty good shape in my teens and 20s. I lifted weights, played basketball and football, ran and biked quite a bit. I even won my weight class in a bench press contest at Penn State my sophomore year.

My 30s were consumed with family and career. My job was really taking off and in a way which caused me to travel quite a bit. When traveling I tended to eat (and sometimes drink) too much and exercise way too little. I put on 70-plus pounds until 2004 when I tried to get back on a better diet and exercise program. I lost roughly 25 pounds in the first half of 2004 to about 205, then stayed at 210-215 for the next 18 months.

In January of 2006 my wife and I separated. The combination of this stressor and my job led back into my bad eating and exercise habits. Then I experienced a ruptured disk in my back to worsen the situation. I didn't change my diet but couldn't exercise at all. My weight ballooned to 235. Even after recovering from my back injury and beginning light exercise again my weight didn't really budge.

Early in 2010 I found an old picture of myself and a buddy from 1989. I looked at myself and said "I will look like that again."

In March I really started watching my diet and walking 5-6 days per week. I really watched the fat and total calories at first, then concentrated more on increasing protein and reducing carbs. I started out only going a mile at a time, then gradually increased to 2, 3, then 5.

I also started lifting again, but because of recurring shoulder injuries was forced to go with low weight/high rep workouts. This turned out to be a blessing in a way because the weight started to melt off. After getting down to 195, I started running 1-2 days per week. I kept this up all summer, working up to running 30 miles a week by the fall of 2010.

My weight's only come down another 20 pounds or so but my body fat reduced a bit in the last year. I feel strong, fit and can run and play games with the teenagers all day. I recently re-married and am working with my new bride on her own transformation which is well underway. 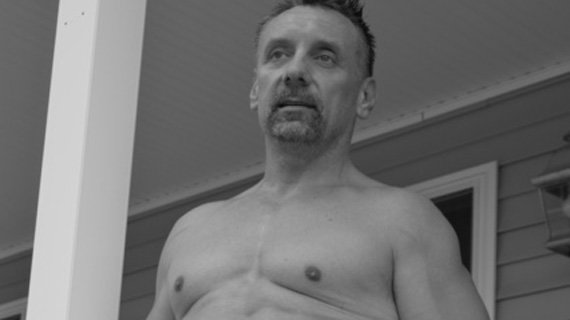 I feel strong, fit and can run and play games with the teenagers all day.

I lift weights every other day. Cardio is every other day, either running outside or the Stairmaster if weather is bad. Lately I've been going to the gym with my wife twice a week to work on legs because I like their machines.

My upper body routine is more like circuit training. I do bench, bicep curl, tricep pressdown and lat pull-down right after one another with only a few seconds in between. I do 4 sets of 15 reps with medium weight. I also do 5 sets of 160 crunches on weight days and 6 sets of 200 on cardio days.

Get inspiration from me or others on Bodyspace, then use what works for you. That's the most important thing. Consistency.