Grind To Grow: Try Your Squats And Presses With Kettlebells!

If you think the kettlebell's usefulness ends with the swing, you're missing out. Sub it out on squats and presses and build strength that shows!

I'll never forget the first time I squatted with a pair of 32-kg kettlebells on my chest. It felt like an elephant was sitting on me. The pressure in my gut was immense, and I could barely breathe. Afterward, my abs were almost immediately sore. I was shocked, because as a competitive weightlifter I could front squat, butt-to-ankles, more than 400 pounds. But these two 70-pound balls of iron made me feel like I was fighting for my life!

I quickly learned that kettlebells are unjustly overlooked as strength equipment; they are often only favored as endurance tools for high-rep ballistic movements like swings and snatches. They're equally adept and providing muscular overload on slow, heavy lifts like squats and presses.

Why? It's simple: Your body knows that to get stronger, as well as to continue burning fat, it must adapt. Heavy kettlebells give it a challenge that is uniquely difficult to overcome. Because of their odd shape, kettlebells actually make the body do more work than traditional implements such as barbells and dumbbells. Sub them out even just for a couple of movements you already do, and you may be surprised at the benefits you receive.

The reason the double-kettlebell front squat is so much more challenging than its barbell cousin is due to leverage. Consider the rack position: With a barbell, the load rests near the top of the spine, across the collarbone and the front of the deltoids, just below the head. In this arrangement, the barbell becomes virtually one with the lifter, making it easier to move the external resistance. This allows you to move much more weight.

With a kettlebell, it's almost the opposite. In the rack, the weight rests low, against the outside of the forearms, with the elbows pointed down rather than out. The bells try to pull your body forward and off-balance, which forces your entire midsection to reflexively contract in order to keep you from folding in half.

If you've been lifting—or just reading about lifting—for a few years, you've probably heard this same argument used as a reason to do barbell front squats rather than barbell back squats. But the truth is that the simple substitution of two kettlebells—or even just one—for a barbell means your midsection will take even more of a beating. And this has benefits beyond building core strength.

To start with, you'll become a better squatter. Because the spine is protected due to the increased reflexive core activation from the rack, lifters can usually squat deeper with kettlebells than they would with a barbell. The difference here is one you'll likely feel on your backside for days after the first time you try it, so consider yourself warned.

The increased stability demands upon your core musculature during the front squat are also present in other slow kettlebell lifts—or "grinds," as they're often called. Look at the double kettlebell military press, for example: The increased demands placed upon your core mean your body has to work harder to stabilize your joints so your prime movers—the lats and delts, in the case of the press—can do their work.

The upshot, as with the front squat, is that you'll need less weight to make all types of muscles work more efficiently—particularly the crucial stabilizer muscles around the shoulder and other joints. Efficiency, in this case, means they'll do what they're supposed to when they're supposed to do it. To pick one painful example for many lifters, a strong rotator cuff stabilizes your shoulder joint so you can safely bench press. A weak or injured one, on the other hand, keeps you from benching heavy, or from doing it at all. 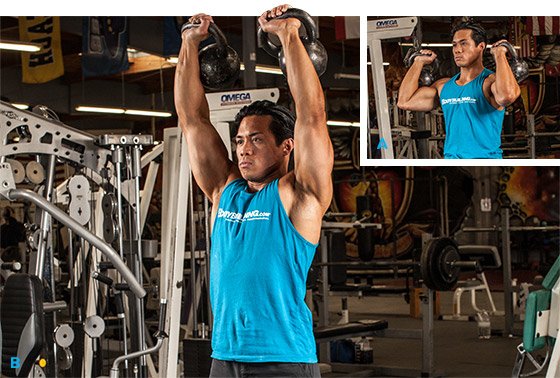 I'm also of the opinion that one of the causes of what are commonly called workout "plateaus" are actually stabilizer muscles that are weak or don't work properly. Faced with a heavy load that might damage the joint, your body intuitively protects itself by shutting down the nerve force to the bigger muscles—the prime movers—that traditionally do the work.

You may have heard similar logic used to tell you why you should train with free weights rather than with machines. Yes, it's true: Core and joint stabilizer activation happen to a certain extent with any training tool, but both are more intense with a kettlebell, due to the increased muscular activation from the offset handle. Consider them the freest of free weights.

You Only Need One

"Resist the urge to let your stronger side set the pace. Train both sides to be relatively even with each other."

Want to know what's even tougher than a double-kettlebell grind? The same movement loaded unilaterally. Working one side of your body at a time, as with a single-kettlebell military press, requires your body to make all the muscles on the side opposite of the load—and especially the core musculature—contract to keep you from being pulled over sideways.

Another interesting result from training with a single-kettlebell is that you can even-out strength imbalances from side-to-side. Often, side-to-side imbalances are responsible for holding back your progress on traditional bilateral exercises like the barbell squat, deadlift, and military press. Many people find a single-kettlebell front squat to be much more challenging on the core than a double front squat. The same thing holds true for the military press.

If you find you have a strength imbalance, resist the urge to let your stronger side set the pace. Train both sides to be relatively even with each other, both in the number of reps and the amount of weight you put over your head. You may feel like you're holding back at first, but don't be surprised if your big barbell lifts get stronger as a result.

Strength is a worthy goal on its own, and it's more than enough reason to try kettlebell squats and presses. But getting stronger is also essential for burning fat and getting leaner over the long term.

Think of it as a cycle. The increased muscle activation and range of motion you experience from doing deep, difficult squats and overhead presses demand that more muscles work harder than they would otherwise. When you work harder, you burn more calories. And since training the core, especially in an integrated manner while standing, makes the body stronger, you'll be able to lift heavier and work even harder in the future—which burns even more calories. And so on ...

The downside, if there is one, is that kettlebell grinds are known to leave bruises—on your ego. I think you'll be just as surprised as I was at just how hard they make you work. But stick with them, and you'll also be surprised by the fruits of your labor: A stronger midsection, a more powerful and defined body, and more strength you can put to good use.

Make the kettlebell swing your 1-stop shop for increased muscle size, definition, fat loss, and the heart of a racehorse!

Kettlebell Explosion: Harness The Power Of The Kettlebell Swing

Don't try to learn the kettlebell swing by watching it get butchered in your local gym. Use these drills to nail this powerful movement once and for all!

Meet The Squats: 7 Squat Variations You Should Be Doing

In the old days, there were two kinds of squats: 'good' and 'bad.' Today, you can shop around between multiple versions of the movement. No more excuses. Get off the machines and give the squat a shot!

Geoff has been working in the fitness industry since 1993, when he started working in the college gym. He tours the US to help people regain strength.