5 Factors To Reach Your Peak!

Peaking for a show is probably one of the most elusive elements of bodybuilding. Ask any competitive bodybuilder… Once you're lean enough there are 5 nutrition factors to consider in the final week. Learn more right here!

Peaking for a show is probably one of the most elusive elements of bodybuilding. Ask any competitive bodybuilder and they will often have some rituals which they feel will leave them tight, full, and dry come the day of the contest. If you read around enough you will find conflicting information and if you have competed you will realize that what worked once might not have the same effect a second time.

I am not going to promise you a fool proof plan for coming in swole and dry for your next contest, rather I wish to elucidate the differing factors which might affect your condition and depending upon your circumstances and personal physiological state you can manipulate any given factor to aid you in peaking.

You hear talk about holding water or being flat as the reason why someone didn't look there best—being honest, most of these people are deluding themselves and the real problem is not being lean enough in the first place.

If you are holding fat then water issues are the least of your problems. Speaking with many experienced competitors and from personal experiences its clear that if you're not lean to begin with all the manipulation of salts, carbs and water are all moot points if you're not lean enough.

Typically you need to plan on loosing one to two pounds a week; as such if you need to lose ten pounds then you need from five to ten weeks of dieting. My advice is to work out how much you need to lose (a good trainer can estimate body fat for this purpose) work out the weeks needed and then add a couple of weeks onto it as everyone underestimates how much they need to lose to be properly shredded.

Once you're lean enough there are a few factors which you need to consider in the final week, namely:

During the final week the amounts and types of macronutrients (fats, carbs and protein) will need to altered to accomplish three objectives:

It needs to be understood that amounts of any given macronutrient are linked to the amount of another, typically if your going to decrease one you need to compensate by increasing another.

Carbohydrates are the usual suspects to be altered as the goal is to fill out glycogen stores in order that the muscle is at its biggest and push out against the skin in order to gain maximal clarity. However consume too many and the experience of "spilling" over can occur which will blur the hard worked for definition and separation.

Typically to get maximum effects from loading the muscles with carbohydrates its best to employ a depletion phase first, essentially you consume low dietary carbohydrates for several days whilst training in a manner which depletes muscle glycogen stores. The end result of this will be a muscle which is more receptive to carbohydrates and will also have a greater capacity for glycogen storage. 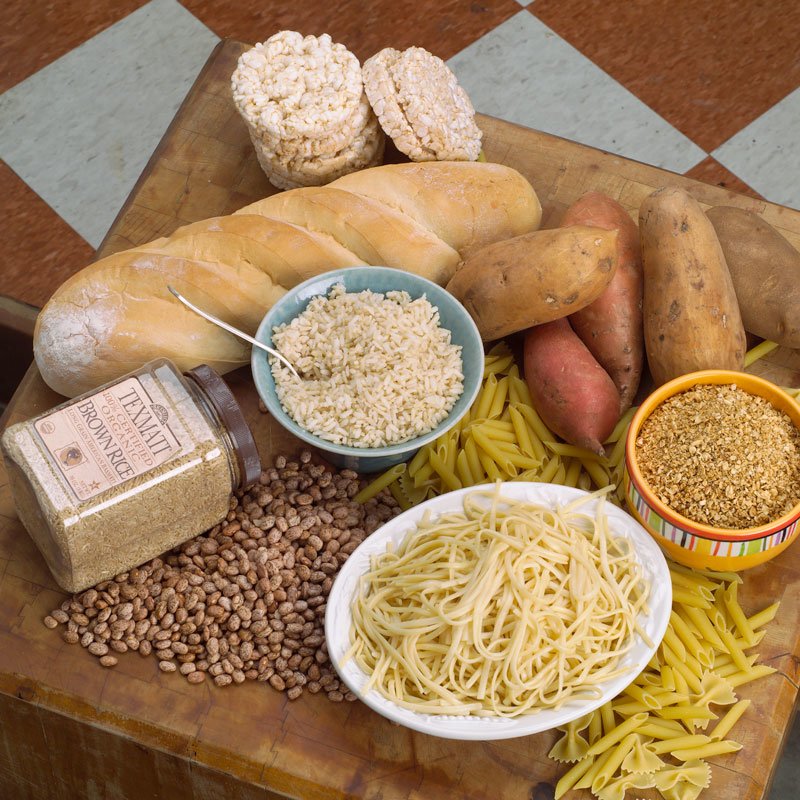 During the loading phase for carbohydrate intake it's suggested you consume in the region of 8-10g of carbohydrate per kg of lean bodyweight (at this point your body fat should be that low that bodyweight and lean bodyweight isn't that much different). Its been shown that this level of consumption will lead to glycogen re-synthesis levels of 100-150% within 24-36 hours.

Considering this its questionable whether a full three days of eating as many do is required and may explain why many spill over so easily. Considering we are aiming to avoid spilling over I would suggest limiting the carb loading to either a day and a half or even two days max.

Another issue which will avoid last minute wrecking of your conditioning is to load a couple of days away from your contest. Glycogen is a fairly stable substrate within the body, in that once you have loaded it will stay there unless used. Considering this I would suggest loading three or four days out from your contest for the 36 hour period, if you have spilled over reducing your food intake for the last couple of days will eliminate any contest condition mishaps and allow you to regain tightness.

During your carb loading however protein can be reduced as the increased intake of carbohydrates will have a protein sparing effect and allow you to maintain calorie control whilst eating copious amounts of carbohydrates.

Fats need to keep low during both the depletion phase and the loading phase. Typically when you reduce carbohydrates it's acceptable to increase some fats which will provide energy and aid in maintaining the fat burning processes, but during the carb depletion it will just act as a fuel substrate instead of the carbs you are trying to deplete.

When you are loading you want to be able to quickly and easily digest carbohydrates and at the same time limit overall kcal intake to avoid spilling over, as such keeping the fat low during this period will aid in this.

It's paradoxical that to get dry you need to consume plenty of fluids. You are wanting to maintain a high level of fluids (up to ten liters) most of the way throughout the week which will increase ANP and inhibit aldosterone, an anti-diuretic hormone which leads to increased water excretion via urination.

To be totally dry either a reduction in water intake or cutting water out up to twelve hours before the show will need to occur so the increased excretion of water combined with a reduction in intake leads to a decreased level of subcutaneous water.

The intracellular water should be maintained due to the carbs within the muscle, however cutting water too early can lead to flat muscles as the water shifts from the cells to replace that extracellular water which has gone.

Typically it's suggested you take in around ten liters of water daily and cut this down to a couple of liters the day before and possibly even cutting water out around 10-12 hours before the show. It's debatable whether totally cutting your water out is necessary.

Many micronutrients will act as electrolytes and alter the tonicity of a fluid. The two electrolytes of importance to a competitive bodybuilder would be sodium potassium. Like carbohydrates, electrolytes can control the direction that fluid wants to shift between cells and manipulation of said electrolytes. The problem is your body doesn't want massive shifts in electrolyte balance and does its utmost to hold onto a stable level within the body.

Unless you are taking drugs which would affect the balance of electrolytes, it's often best to just try to maintain a normal intake of sodium and potassium in order to ensure the body maintains its normal balance and the manipulation of carbohydrates and water levels will take care of the rest.

Prescription diuretics are powerful drugs which can have numerous negative side effects and as such I would advise to stay away from these. However, there are many natural products or common foods which would aid in expelling more water from the body or dragging it into the cells. These are the most common:

Vitamin C: The water soluble vitamin excess will just be expelled in the urine which also drags extra water with it upon urination. Typically it is advised to consume up to 10g a day building up to this as the week goes on so you are consuming this amount on the day before and the day of the show.

Dandelion root (taraxacum officinale): Acts to push out more water via the kidneys and typically around 500mg to a couple of grams are taken the day before and the day of the show.

Alcohol: Alcohol inhibits many of the water retaining hormones such as aldosterone and as such more frequent urination continues. Many also use alcohol before going on stage as it relaxes the blood vessels to aid in vascularity, but it can backfire as core temperature can drop which will negate this effect. Typically a glass or two of wine the night before suffices.

Typical foods which can cause allergic reactions include eggs, wheat products, milk and oats. Considering this it's often best to stick with foods you have been using throughout your diet and that you are comfortable with. It amazes me how people carb-up on foods which they haven't had in their diet for months and wonder why their body reacted badly to it.

Getting ready for a contest is a hard grueling effort and you want to look your best, often for most it's a case of ensuring they are lean to begin with and then ensuring they don't do anything extreme—keep your water high throughout the week, add in a few more carbs mid week and relax.