Heather took a difficult path to reach the cusp of pro glory. Now she relies on a proven fitness formula that built her stunning body to reach WBFF pro status.

Being from New Zealand, I've always lived an active lifestyle. I played many sports throughout school and was also keen on dance, but I considered myself an all-around athlete.

Near the end of high school, I battled an eating disorder, which started as accidental weight loss and became a regimented addiction to set strict targets for exercise and calories. I never viewed myself as overweight. It was about being successful at something that many people struggle with—losing weight—and an anxiety about exceeding my numerical goals from the previous week. At my lowest weight, which was 102 pounds, I looked like a completely different person. I looked in the mirror once and barely recognized myself.

I steadily began gaining weight back but slowly adopted a party lifestyle in college and became relatively podgy, which I had never experienced before. I slipped into bad habits, and although I still worked out and played sports, I struggled with binge eating, restriction, and bulimia. My life was unsatisfying and unchallenging.

I started to focus on health and fitness and found Bodybuilding.com, which introduced me to structured workouts and the importance of dieting. I read as much as I could find about training properly and found a boyfriend who enjoyed training too. 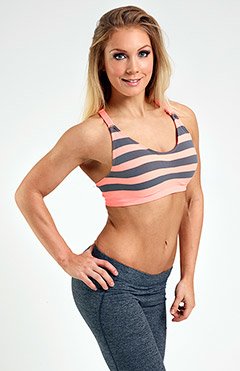 After I received my personal training qualification at age 19, I worked at the university gym and taught group classes. When I went home for the holidays, I worked for a military-style, outdoor training group. I completely transformed my outlook and priorities from previous years.

I surrounded myself with likeminded people and had the opportunity to work at a fitness expo in October 2013, which felt like fitness Disneyland. Seeing bikini girls compete and meeting the athletes I saw in magazines secured my drive to compete. I paired with a trainer who supported and coached me through my first bodybuilding prep starting February 2013 and competed in May 2013, where I placed fifth overall against girls who were more experienced. 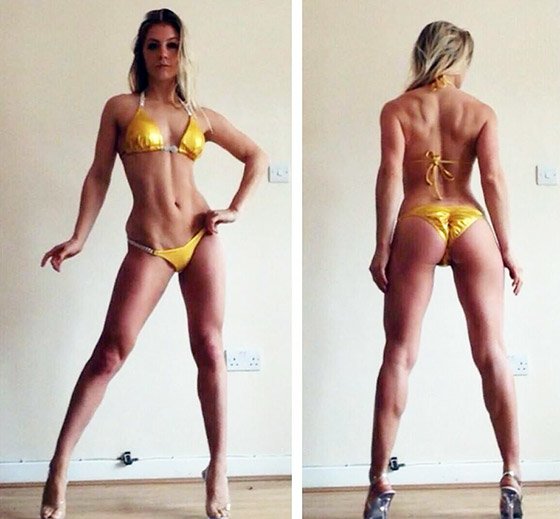 "Seeing bikini girls compete and meeting the athletes I saw in magazines secured my drive to compete."

I rarely lack motivation, but I'm human and can feel down. In these times, I think about how far I came. Progress photos are useful so you can look back and reflect on where you were. I also look at women who inspire me. A quick look at beautiful, strong, and healthy bodies remind me to push myself.

The Internet gave us freedom to share and connect, especially in the fitness industry. BodySpace, Instagram, Facebook, and Twitter give me inspiration and knowledge as I'm able to specify who I follow. There's always new material posted from all over the world. I like sharing too. The support is fantastic in the online fitness community. 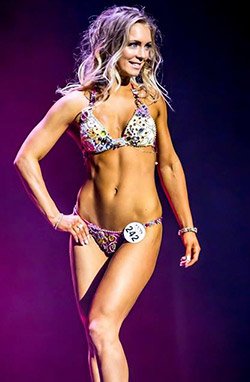 "It's rewarding to be a role model for younger women, especially those who encountered similar struggles as me."

This year will bring many changes for me. I will finish education in 2014 and the world will be my oyster. I'm determined to win a WBFF pro card after I graduate and compete in the World Championships in Las Vegas alongside my best friend and other women I look up to. Eventually, I want to work in the business side of the fitness industry and be a fitness model. It's rewarding to be a role model for younger women, especially those who encountered similar struggles as me.

You will never be like the people you compare yourself to. When you stop wishing to be like someone else and focus on yourself, you will see positive changes mentally and physically.

I look up to Jen Jewell. She has been my phone background for years. Her success didn't happen overnight. As a result, she's hugely respected and works hard to maintain her reputation.