You've seen her dominate the Figure category on stage. Now get an exclusive look what it's like to compete as four-time Olympia winner Nicole Wilkins.

When Nicole Wilkins graced the stage at the 2014 Olympia, she came in as a seasoned pro. As she stood under the hot, beaming lights—eager to make history with her fourth Figure and first back-to-back Olympia win—she heard nothing. The roar of the crowd fell silent, and the audience's cheers were put on mute. For that single moment, everything came together for the returning champ. Focus was key.

Nicole Wilkins spoke with Bodybuilding.com about what it was like to compete at the 2014 Olympia, and shared her thoughts on the role figure competition has played in her life.

For Figure competitors—or any Olympia competitor for that matter—the competition is about presenting a perfect package on stage, even if things behind the scenes are a little more complicated. "Winning my first Olympia was amazing, but to then lose it and have the motivation to keep going after a divorce was difficult," Nicole says. "I mean, those are extreme highs and lows, but every one of those steps and every one of those moments has led up to this."

The week before the Olympia may be taxing for some but, despite the occasional bout of butterflies—to be expected when defending a title and standing in front of the world in a posing suit—Nicole says it was like the calm before the storm. "With the hard work behind me, it's just about enjoying the moment and having fun."

Part of that fun happened during the first night of the O at "Meet The Olympians," where competitors met fans and signed autographs. It was a place where the size of the crowd at your booth was a sign of your popularity and recognition in the field. "I remember the first year I was there," Nicole says. "I didn't have any line at all. I thought, 'Wouldn't it be awesome to have a line of people who actually knew who I was?'" This year, she had just that. 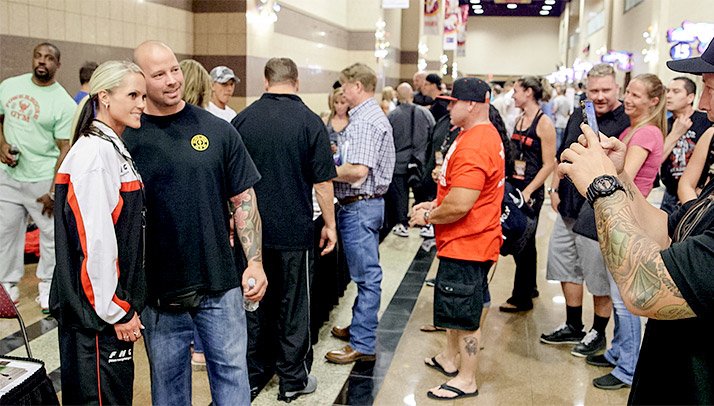 Part of that fun happened during the first night of the O at 'Meet The Olympians,' where competitors met fans and signed autographs.

"It's exciting to know you have that big [of] an impact on people that you never even met before" she says. "I deal with women who've lost 100 pounds or guys who have lost 100 pounds or quit smoking, and they want to tell you about all the positive changes they've made in their life. That's when the reality sets in that you have a huge impact and affect people more than you realize."

It's a level of notoriety Nicole still hasn't gotten used to, and something she never takes for granted. "I'm always hoping people will still want to see me," she says. "I'm hoping that people want to talk to me and come up to my booth. I don't think I'll ever get to a point where I'll expect that. To me, it's very humbling. I'm just doing what I love."

"I went into this sport originally because I wanted it to help my career," she says. "As a personal trainer, I thought it would help my business. I could show people that I could get in good shape too. I still have that mindset."

Nicole won't be quitting figure competition anytime soon. "When you're number one at this, you want to stay number one," she says. "When I feel like I'm not getting that excitement anymore, that's when I'll know it's time to hang up the heels. I don't think I've necessarily reached my full potential yet. I still have room for growth."

The Day Of Prejudging

On the morning of prejudging at the 2014 Olympia, Nicole felt good. She was relaxed, at peace, and exactly where she needed to be. To put it simply, she was ready. She was up around 5 a.m. to eat, go through hair and makeup, and have her tan retouched. Nicole refers to it as "the beauty pageant part."

"That's how I explain it to people who have no idea what I'm doing: just a beauty pageant for fitness girls," she says. "It's like I'm getting ready for Halloween, you know, the costume makeup."

Through the humor, Nicole kept her mind on what was at stake. All her months of hard work were about to come to fruition, but Nicole remained composed. Part of that had to do with the hard work she had put in over many years.

"I think the times when I was more nervous were when I didn't feel confident with how I looked," she says. "It's a very calming feeling knowing you worked really hard and the rest isn't up to you. I'm just going to hope the judges like what they see." 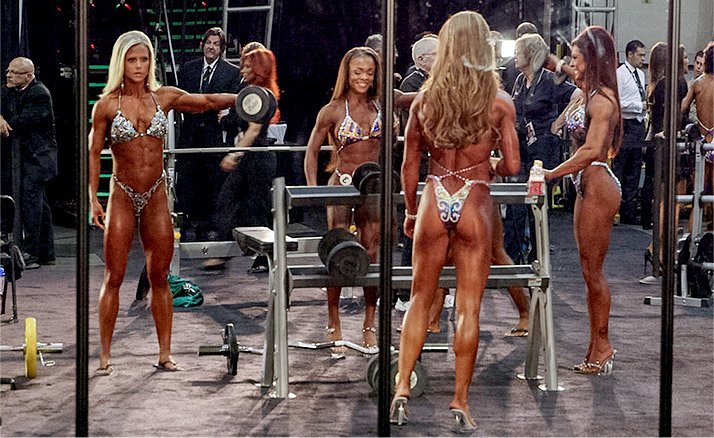 On the morning of prejudging at the 2014 Olympia, Nicole felt good. She was relaxed, at peace, and exactly where she needed to be.

After boarding the 9 a.m. shuttle to prejudging, Nicole hit a "hurry up and wait" situation. "I should go on around 11:30 a.m., so this is where I'll just hang out and keep my feet up," she says while waiting in the backstage area. "I'll just relax, eat again, and then—about 30 minutes or so before I go out I'll put my suit on, get the glazing process done, and come out to the free weight area to do a little bit of shoulders and pump up. Then it'll be show time."

Head-to-head competition like that might seem fierce, but for Nicole, it had always been about bettering herself. "It's not really a competition for me with anybody else," she says. "I can only look like Nicole Wilkins, and I want to make Nicole Wilkins look the best that Nicole Wilkins can. If I place second, it's not the end of the world—my life doesn't change." 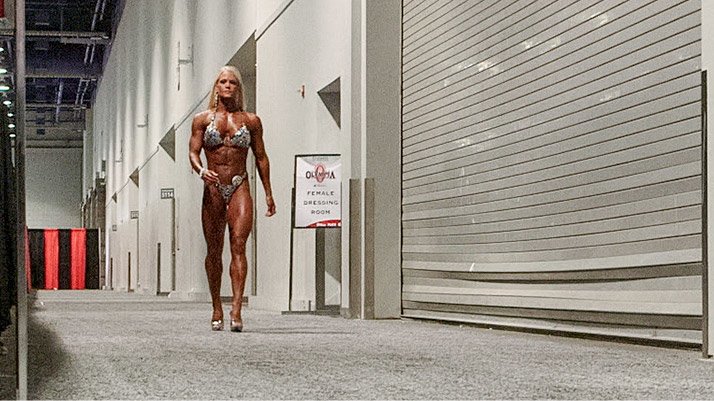 Nicole knew that prejudging was where all of the major decisions would take place, and that by the end of it the judges would probably have a good idea of how the finals would pan out.

After the initial Figure lineup, the judges took notice of Nicole's incredible preparation. "They pulled Candice [Keene] and me out for the final callout," she told the camera backstage. "So it looks like it's first and second between her and me. I felt confident, so hopefully the judges like the conditioning that I brought."

The Night Of Finals

Even with multiple Olympias under her belt, Nicole has never taken high-level competition for granted. To her, it's always a pleasure. "I don't think I'll ever get used to it," she says. "The first year or two, I had no idea what to expect. I was just like 'Holy cow! I can't believe I'm here.' I still feel that way."

As she prepared to step onto the finals stage, Nicole opened up about the challenges competitors—even returning champs—face. "You're second-guessing yourself on and off throughout the entire process because you are trying to chase perfection. Perfection does not exist, but when you put forth that much effort day after day, you expect to see results."

At the 2014 Figure Olympia Finals, Nicole's hard work earned her more than just admiration and applause. It paid off with a history-making fourth Olympia win. 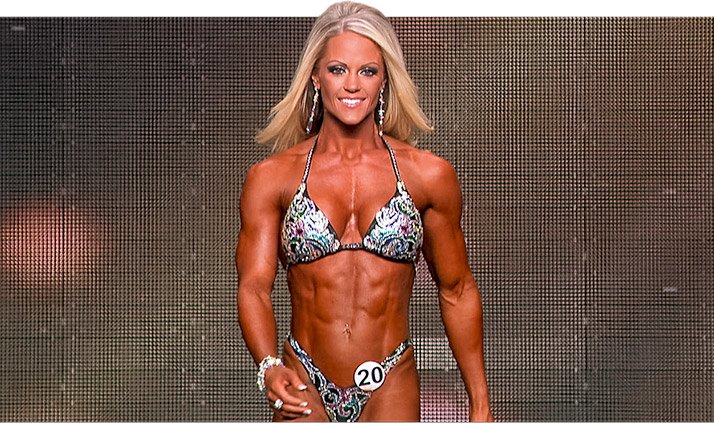 'I feel absolutely amazing,' Nicole said during her acceptance speech. 'Coming into this, I wanted to make history, and I did.'

"I feel absolutely amazing," Nicole said during her acceptance speech. "Coming into this, I wanted to make history, and I did."

After thanking Joe Weider for creating the Olympia, the IFBB for allowing her to compete, the committee, her trainer, her boyfriend, and her family, Nicole took the time to thank her fans. "You inspire me more than you know, so I plan to maybe make it five next year. I'll do my best to make that happen, so thank you very, very, very much."

If Nicole can communicate anything to her fans, she wants people to know that—beyond the glitz and the glam of shows—she's a real person, just like they are. "I think when you see someone who's in great shape and who looks like they have everything together, it doesn't mean that they don't struggle sometimes too," she says.

When it comes down to it, getting to the level of a four-time Olympia winner requires drive, dedication, and consistency. To rank among the best also requires a certain level of sacrifice.

"When you're preparing for something like this, everything else revolves around that," Nicole says. "I think that in life in general, if you want to be really successful at something there is going to be a lack of balance somewhere. And I'm OK with that."