Meet the most awesome, helpful, and tasty things that have recently hit the desks of Bodybuilding.com's editors!

There are so many cool and innovative new products on the market for fitness enthusiasts, but which ones are the real deal, and which are all hype? Never fear: The editors at Bodybuilding.com took time out of our busy schedules to test some of them out—if you can call playing with toys and eating food "testing"—and are here to give you the low-down on our favorites.

These delicious treats, sweet new kicks, brain-boosting supps, and items to make life as a fitness enthusiast easier are making us swoon.

You hate when your shaker bottles leak. Everyone, does, of course, but you hate it more. Luckily, the leakproof deities have answered your prayers with the Umoro One Shaker, which ensures 100 percent leakproof-ness. Interestingly, the bottle was birthed from a crowd-funded campaign on Kickstarter, because apparently many others shared your gripe about leaky lids.

The lid lives up to its promise, but just as impressive is the storage compartment hidden within it. Simply pour your powder—be it protein, sports drink, flavored powder, whatever—and it won't mingle with the water until you press a button at the top of the lid, which then releases the specially designed shaker ball and the contents into the water. The future is here, people.

Although the bottle and lid are labeled as being dishwasher safe, we don't recommend it, having seen one get warped beyond use after an especially hot clean cycle. At nearly $30 bucks a pop, it's better to protect your investment and hand-wash the bottle and lid to be on the safe side. 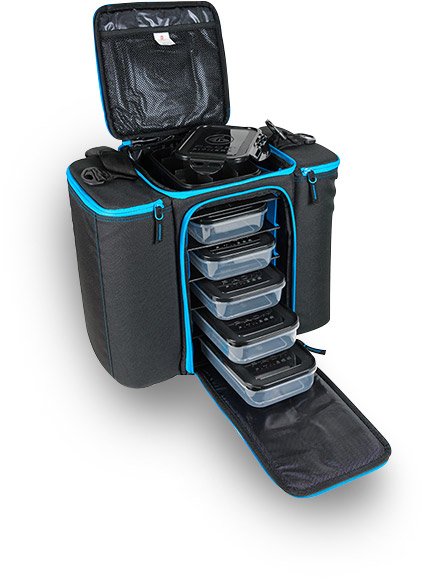 Stop carrying your disorganized mess of meals and snacks in a sad-looking plastic tote! 6-Pack meal bags are already well-known among folks who want to have their on-plan meals ready no matter where life finds them. And the company has responded in recent years by creating a whole range of new variations, including purses and backpacks. But for our money, the most perfect version is—and has always been—the Innovator.

Each bag comes with its own set of perfectly fitted meal-prep containers, gel packs to keep your food cool for eight hours, and ample extra pockets for things like a bottle of Sriracha, a shaker bottle, or your wallet. We've found the three-meal bag to be the perfect size, as most people don't need more meals than that when you're out and about. But if you're that busy or you eat that much, the five-meal bag doesn't cost much more.

What's the only thing that could make the Innovator better? A Bodybuilding.com logo emblazoned all over the top pocket, of course! Maybe we're just flaunting some Bodybuilding.com pride, but who can deny how slick the black and cyan blue looks on the bag?

Coconut butter and chocolate—together! Eating Evolved has combined these two independently awesome things into one decadent treat that also happens to be free of soy, dairy, refined sugar, and gluten. It's also organic (and probably paleo and vegan). And it's delicious. Whew, that's quite a feat!

But how is it different? Since the cups are made from coconut butter, they're denser and have a silkier texture than Reese's cups. The classic and Mint Creme made us happy, but then we tried the Caramel and Sea Salt and met our official new go-to. These things are to die for. 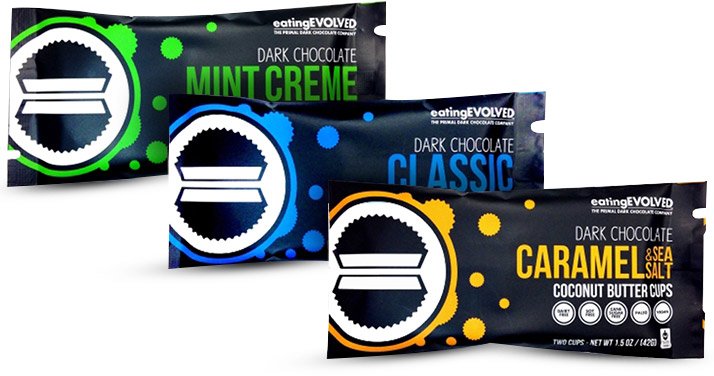 For inquiring, diet-conscious minds: One coconut-butter cup has 93 calories, 8 grams of fat, 6 grams of carbs, and 1 gram of protein. Good enough for us!

In addition to the coconut-butter cups, Eating Evolved also makes delicious chocolate bars called Primal Chocolate. Also made with organic ingredients, the bars come in flavors like Vanilla Bean and Coffee, Fig and Almond, and Almond and Sea Salt. For chocolate, they're incredibly macro-friendly. On average, a third of a bar has about 140 calories, 11 grams of fat, 12 grams of carbs, and 4 grams of protein.

Yes, these are on the expensive end, since one 3-ounce bar is about $5. However, if you care about the quality of your ingredients, find a way to squeeze them into your treat budget. 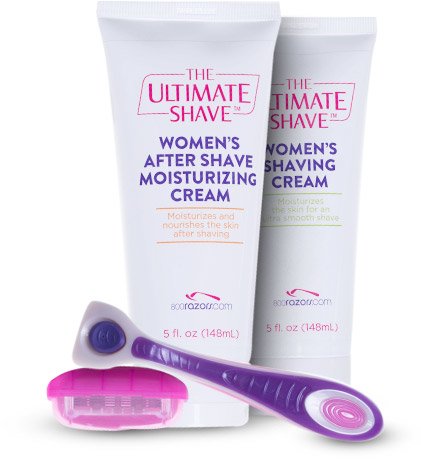 Admission time: Women find shaving to be boring and uncomfortable. Whether it's for a photo shoot or just for upkeep, we dread it. At least, we did until 800razors.com's Ultimate 5-Blade Shave for Women kit changed our tune by showing us the glorious light that is the five-blade razor. Only one pass up the leg and voila—not a stray hair left.

To be clear, this isn't a subscription service, although you have the option of automatically ordering cartridges every four months. The kit comes with four cartridges, shaving cream, and after-shave lotion, both of which were far superior to one editor's husband's no-name-brand shaving cream she usually borrows. The blade's comfort strip seemed to help relieve any irritation as well.

Although we lament the fact that it hasn't made shaving armpits any easier, with legs the difference was night and day. Of course, we do have to wonder if the "made for women" handle was wholly necessary—not sure our lady hands would grasp a men's razor any differently—but they're plenty grippy, so we're not complaining.

We recommend this razor for all body-hair-conscious folks. You know who you are. 800razors.com also has men's razors and other men's shaving products. 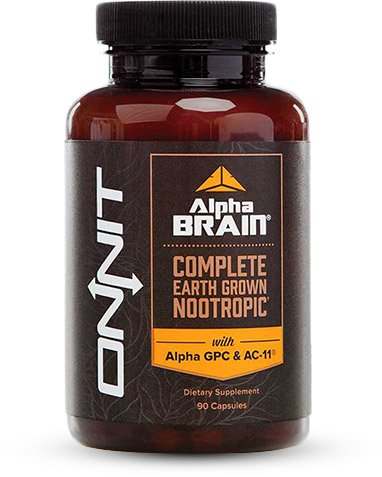 Onnit's flagship nootropic—a supplement that enhances cognition and memory, for you noo-noobs—has developed a widespread following in recent years, thanks in large part to word-of-mouth recommendations like this one we recently received: "I just get shit done. I feel...productive."

That's about as apt a description as we could come up with. Uniquely, the label has two suggested uses: The first is "enhanced mental performance," and the second has you take it 4-6 hours before bed "to help support enhanced dream state." As that implies, Alpha Brain isn't a stimulant or a pre-workout. All of its ingredients boost memory and focus, but not in a way that leaves you hopped up or hyper. It's a quiet focus, like finding that perfect song that allows you to keep typing without even having to try. You find your groove.

We've reviewed Topo Athletic's training shoes a couple of times in the past, but we keep coming back for more because their new offerings just keep getting better and better. The Halsa is their latest tool for those of us who prefer to use the same footwear for heavy lifting and general athletic adventuring. It's a minimalist shoe by design (meaning wide, light, and flat underfoot), but also substantial enough to power you through anything you do indoors or out. 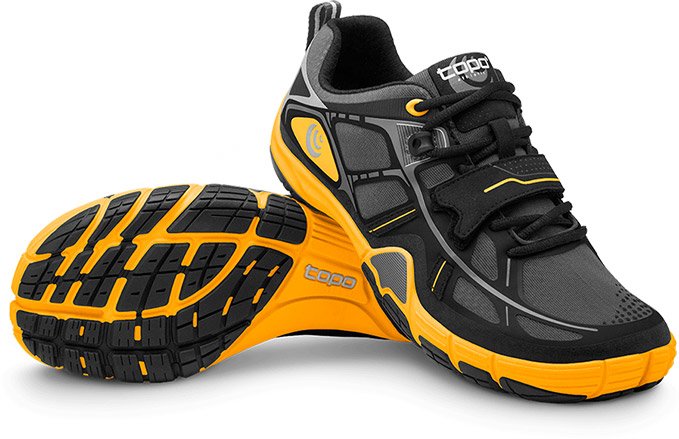 With both laces and a forefoot strap, these hold a little tighter to the foot than Topo's previous models that contained a dial-based lacing system similar to a ski boot. Yes, it's zero-dropped, meaning there's no raised heel. So if you're used to having some beef in the back, you might expect a little break-in time and sore calves at first.

As we detailed in a previous article, the benefits are well worth your patience. Light as a feather, tough as a tank, and tied together in a simple, sleek design that doesn't look bizarre or orthopedic. What else could you want? 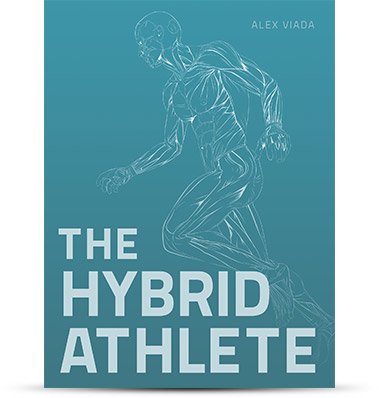 Many of us enjoy lifting heavy objects in the gym and competing in triathlons, marathons, and century rides. Doubters say you can't excel at both. Why? Because "too much endurance training limits your potential in the gym," or "lifting weights won't make you a faster runner." Don't tell that to Alex Viada, author of "The Hybrid Athlete" and co-owner of Complete Human Performance, a training facility located in Durham, North Carolina.

This guy not only talks the talk when it comes to "hybrid" training, but also walks the walk. Viada manages to takes two drastically different types of training (resistance and endurance) and program them in a way that allows anyone to maximize muscle strength and mass—while still being able to kick ass during a mud run. His style of training has allowed him to excel in both strength and endurance activities. Seriously, who else can say they've squatted over 700 pounds raw and competed in ultramarathons and triathlons!

We like this book because it makes a definitive case that you can love and participate in multiple training disciplines. The explanations and programming principles are simple enough that anyone can understand his philosophy on concurrent training. Additionally, he gives several sample training programs, taking the guessing work out of it. And when your race is run, don't forget quite possibly our favorite part of book: an informative appendix on beer recommendations!