An Interview With Eddie Robinson!

Eddie Robinson has been involved in the bodybuilding and fitness industry since 1985 and in that time has won the titles of Mr. America and Mr. USA.

I first met Eddie Robinson at the first Mr. Olympia competition I attended in 1996, in Chicago. I was in the hotel lobby waiting for my friend, Samir Bannout, to come down for breakfast. Eddie was sitting nearby and I struck up a conversation with him. Having just been introduced to the world of bodybuilding, I had no clue who Eddie was or what successes he had in the sport.

I didn't even realize whom I had been talking to until Samir came down and told me during our meal. Since that chance meeting, Eddie and I have become great friends and I have even had the opportunity to become his manager. That is why it is an honor for me to be able to do conduct my first interview with a great friend, who I respect to no end. 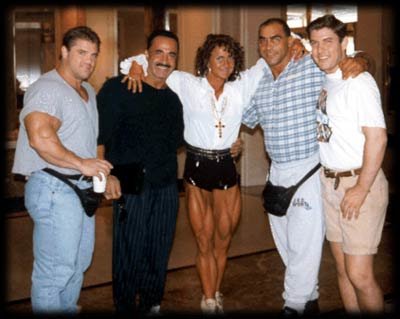 The First Time I Met Eddie Robinson At The '96 Mr. Olympia In Chicago

Eddie Robinson has been involved in the bodybuilding and fitness industry since 1985 and in that time has won the titles of Mr. America and Mr. USA. In addition to winning and placing high in numerous other professional bodybuilding competitions, he has also achieved two world records in powerlifting. You would think being a champion in those two sports would be plenty, but Eddie is also an arm wrestling champion. During his career, he has become one of the most marketable and most photographed bodybuilders and sport models ever. He has over 75 magazine covers to his credit and has been featured in over 200 training and nutritional articles, as well as numerous television appearances.

MS: First of all, thank you so much for agreeing to do this interview with me.

ER: No problem. I don't mind doing it at all.

MS: Eddie, I don't want this to be the typical bodybuilding interview that talks about your training regimen, diet, and so on.

ER: I agree. There are plenty of those interviews out there already.

MS: I do think that most people would be interested in how you got started competing though. I know that you never actually thought about becoming a bodybuilder in the beginning.

ER: Not at all! My dream was to become a pro football player. When I was in school, I even had college scouts looking at me. That was the path I was going to take.

ER: Well, when I was still in school, my dad decided we needed to move to Florida. We were struggling financially so I was forced to start working just to help make ends meet. There was no way for me to keep trying to play football and work a steady job.

MS: Is that when you decided to turn to bodybuilding?

ER: Not yet. We all know how teenagers can be, and I was no exception. I was very angry because we had to move and I couldn't play football anymore.

MS: What did you do?

ER: I was known to get into a few fights back then and I knew that if I didn't find a release for the anger I was feeling inside then someone was going to get hurt.

MS: So were you the school bully?

ER: Not hardly, but because of everything I was holding inside, I could be set off.

MS: How did you stay in control then?

ER: I found time for the gym and I took everything out on the weights. At that time, I focused on my workouts and they were intense! At the gym, I was only concerned with how much weight I could lift.

MS: How did your body respond at such a young age?

ER: It's true about what they say about genetics. I was always athletic, so I had a good base build, but with the intensity of my workouts, my body responded very well.

MS: When you started realizing how amount of weight you were lifting, is that when you decided to start powerlifting?

ER: Yes, and I was eventually able to set world records in the bench press at 575lbs and 610lbs. 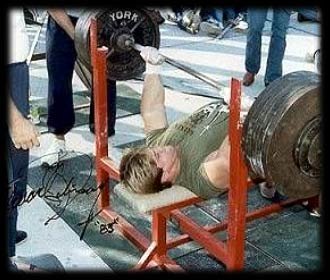 Eddie In One Of His Powerlifting Competitions

MS: Those are very impressive weights for a teenager to be lifting.

ER: That's why they were world records, Marc.

MS: Yeah. I guess so. Since most of readers are somewhat familiar with your bodybuilding career, why don't you give us a quick summary of it?

ER: I really had no desire to compete in bodybuilding. If you're familiar with the rivalry between powerlifters and bodybuilders, you know what I mean. Plus, guys in bikinis? That wasn't for me. Some of my buddies finally talked me into doing a show though. I won my first show and I just kept on winning after that. I won pretty much every bodybuilding and powerlifting competition I entered including: Mr. Teen USA; Jr. Nationals; and I won my pro card by winning the overall at the Mr. USA in 1989.

MS: Did you take a break after you won your pro card?

ER: No. I kept on and I won my first pro show, which was the Niagara Falls Pro show. After that, I was given the opportunity to join the WBF (World Bodybuilding Federation) that Vince McMahon of the WWE started.

MS: Do you regret defecting to the WBF?

ER: Never. The twelve other guys and myself were taken care of very well financially and we were treated like true athletes in that organization. Even though the organization was only intact for a couple of years, the compensation and exposure was well worth it. At that time I needed to make a decision that was most beneficial to me and even after the organization folded, I was the only athlete who Vince McMahon asked to stay on and endorse his line of ICO/PRO supplements.

MS: What brought you back to IFBB?

ER: I had a meeting with Joe Weider and he offered me a contract. It was a great offer and I would be able to compete again.

MS: When did you decide to retire and why?

ER: My last competition was the Toronto Pro in 1999. It got to the point where all of the mass monsters were taking over and I was not willing to put my body through what was necessary to stay competitive against them. My main priorities in my life are my kids and I didn't want to jeopardize being with them in anyway by compromising my health Also, competing is so time consuming and I wanted to be able to spend as much time with my family as possible. 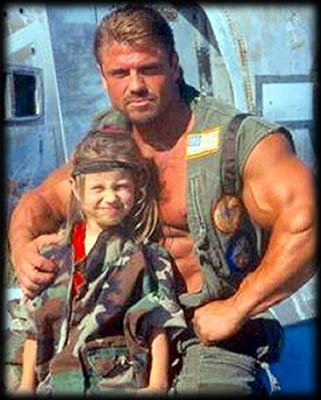 Eddie And His Daughter, Cara 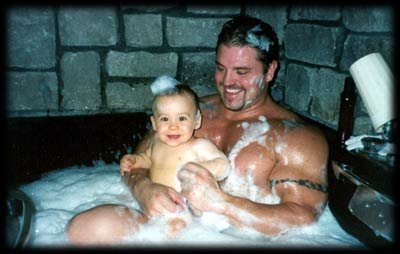 Eddie And His Son, Seth

MS: That is great foresight and somewhat atypical for a bodybuilder. It seems most bodybuilder top priority is themselves, their meals, their workouts and so on. That is one thing that has always impressed me about you is how generous you actually are. I know that you are very charitable person. Tell us a little bit about that.

ER: As I said earlier, I didn't come a privileged childhood at all. I've been lucky enough to be in a position where I help others who are not as fortunate as I am.

MS: What happened when you won an arm wrestling competition?

ER: Oh! I won the Panama Jack Arm Wrestling Championships at Disney World. I donated the $15,000 prize money to charity. During my WBF days, I was able to compete on some TV game shows for charity as well. I've been involved with Special Olympics, March of Dimes and the Melanoma Foundation.

MS: I also know that you are very involved with your church.

ER: Very true! My church and my beliefs are a major part of my life. We all go through hard times in our lives and I know that the strength God has given me and my faith in Him have gotten me through them.

MS: Didn't you also go to New York with your church?

ER: I did. After the Sept. 11 tragedy, I went with a mission group from my church to New York City. We took big moving trucks up there and stopped at every WalMart and Sam's Club on the way so we could load up with food and supplies for the people there. 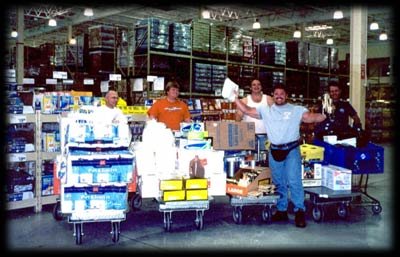 MS: So what else are you up to these days? Are you still involved with bodybuilding in any way?

ER: Like a said earlier, my kids are my main priority and with a 9 yr old girl and a 19-month-old boy, they definitely take up most of my time. They are definitely a handful, but I would never trade the time I'm able to have with them for anything. I think that I will always be involved with bodybuilding somehow. Currently, I'm the president of a new supplement company called Global Nutraceuticals, which is owned by Brian Vassalo. We've formulated some real cutting edge products and I'm real excited about being on this side of the industry. I've actually been working with Randy "Macho Man" Savage and Brian "Crush" Adams of the WWE. They have been taking these products and they have been seeing great results! You can see our products by clicking here.

MS: What kinds of products does your company have?

ER: Marc, these products are great! They are things that I wish were around when I was competing. A great one for bodybuilders is our Clomafen.It has been shown in clinical studies that this formulation actually blocks estrogen and increases a guy's sperm count. This is very important for guys who are "on," but still want to be able to try to start a family. One important thing with this is that you don't just take it after you get off your cycle, but you do it DURING your cycle as well. I know when I was competing and when I decided to get off of everything, my sperm count was very low. I starting taking this, and what do you know?? I have a baby boy now!

MS: It sounds like that is going to become a staple for every competitor's arsenal. What other products do you have?

ER: We also have a Java-Jamba coffee. This coffee is made from the beans in the Tarrazu Mountains in Costa Rica, which is the same place Starbucks gets their coffee beans. We have started with this superior tasting coffee and formulated a product that also suppresses your appetite and increases your energy levels. We also have a Topical One-Testosterone cream. This cream reduces fatigue, alleviates depression, increases lean body mass and decreases body fat. We have many others, but I can't even begin to tell you how good these products are here so I hope everyone will click here to check them all out.

MS: Best of luck with that venture. Speaking of websites, don't you have your own?

ER: I launched my website this past year and the response has been great. You can check it out at www.eddierobinson.org. Make sure you put .org and not .com or you'll go to the football coach's site! I have my bio on there as well as my competition history, interviews, articles, message boards, hundreds of photos and more. I hope everyone will come by and take a look.

MS: Eddie, I know you're a very busy person but I appreciate the time you have taken for this interview. Best of luck to you and everything you do.