Male & Female Athletes In The Media: Are They Equally Portrayed?

In this article I will now summarize, analyze and interpret why male and female athletes are portrayed differently ...

A friend, who happens to be a female athlete, mentioned to me a few days back that notable sports women are often represented poorly by the media. Initially this seemed to me to be a pretty general statement, lacking in substance, but on further reflection its truthfulness became apparent. Having studied the media and worked as a journalist, I would argue also that women athletes tend to be poorly portrayed, both textually and pictorially, by the media.

Given that men are the largest consumers, and players, of sport, it might seem logical that the media focus on male sport and male athletes. However, women may be dissuaded from engaging in sport due to this emphasis, and the way in which athletes of their gender are presented. It is hoped that greater sport participation by women would create a fairer media portrayal of their exploits.

For example, female athletes profiled in major sports publications seem to be chosen more for their looks and "womanly traits" as opposed to their sporting prowess. Who their current boyfriend is or what clothing label they wear seem to be major focal points of many "women's sports" articles.

Male athletes, on the other hand, tend to be subject to a greater analysis of their sporting abilities; on-field exploits and physical capabilities are given a higher priority. It seems to me that, although women athletes are profiled, and this is great, the way the media goes about this seemingly is to attract a greater male readership.

The focus on the sexual seductiveness of the female athlete, at the expense of her athletic achievements seems to be somewhat subjective and biased in favour of the male audience. Some would go further and say that media coverage of women's sport is blatantly misogynistic in the sense that a traditional, overtly sexual, feminine emphasis, is employed when aiming to account for a woman's sporting success.

My friends comment, and the seeming partiality the media adopt when reporting on female athletes, prompted me to conduct an inventory of the quantity and quality of women's sports reportage. Upon reviewing the narrative structure and ideological content of the many articles I read, it became apparent that beauty and other 'feminine' qualities took precedence over athletic ability and sporting statistics.

One article stood out as being representative of the majority I had read, and a classic example of the type of unbalanced reporting, detrimental to the growth of women's sport. I will now summarize, analyze and interpret the content of this article to illustrate the way in which women seem to be wrongly portrayed in the media.

The title of this article "From Russia with Love" hinted at the content within. The articles focus was women's tennis champion Elena Dementieva and supposedly her rise to the top of the professional sporting world. 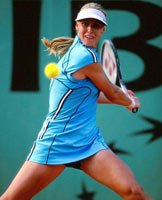 Given this was an article about sport, one would expect, at the least, an emphasis to be placed on the athlete in questions physical capabilities. However, from the very outset, the reader is treated to the simultaneous sexualization and objectification of Dementieva: "She's blonde, she's beautiful, she's a tennis player who hasn't won a tennis title yet - but she ain't Anna Kournikova."

In this one sentence, Dementieva has been termed blonde and beautiful (commonly used descriptive content in women's sports articles), and rather than have her achievements commended, she has had them subtly undermined ("she hasn't won a tennis title yet, and she ain't Anna Kornivova"). The downplaying of Dementieva's achievements might serve also to support the notion that women's sporting accomplishments are of little importance. But wait, there is much more.

Throughout this article, comparisons are made between Demetieva and Kournikova - few of them sport related. Sexually suggestive language and revealing photographs form the basis of the comparisons made. Demetieva is referred to as a "sex symbol," a "gorgeous girl next door" and a "heart-throb who has a horde of drooling fans watching her every move."

Kournikova, by comparison, is called a "sizzling sex-pot," who has had "offers to pose nude for Playboy Magazine." This descriptive language has nothing to do with athletic accomplishment, and, indeed, everything to do with objectification. Let's face it.

Someone like sprinting champion Maurice Green would, and has, been viewed by the media primarily as a supremely gifted athlete and wonderful U.S. sporting representative first - his status as a sex symbol is something that would usually be mentioned as an afterthought, and I am sure many women would consider him attractive. 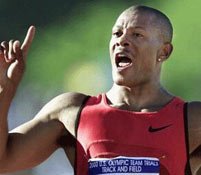 Other seemingly irrelevant, information is also given on both athletes. Demetievas relationship with her mother is given many column inches, as is the "fact" that, unlike Kournikova, she is unlikely to receive offers to pose nude for Playboy any time soon. Kournikova is referred to as a "little queen bee" who always gets her way. "She uses her looks to make money," and "when she smiles her fans just fall for her" are other comments made about Kournikova.

By focusing on such irrelevant, and trivial, information at the expense of sporting skill and athletic qualities, an ambiguous dichotomy is formed around a feminine model, which might serve to reinforce the stereotypical image of the blonde, toned, attractive, younger woman. This might subsequently by perceived by a magazines reader as being representative of female athletes in general.

The pictorial content of Demetieva and Kournikova, in the article in question, again emphasises their femininity, and in particular, their sexuality - both athletes are pictured primarily in sexually advantageous contexts. Of the articles seven photos, only two are sporting action shots - the remainder are posed, with both athletes wearing liberal amounts of make-up and little clothing.

Even the two shots of both athletes, on the court, are taken in almost identical positions, with Demetieva and Kournikova wearing revealing outfits which show the crotch area to full advantage. Indecently, showing the crotch area seems to be a recurring theme in many of the article accompanying photos I viewed during my inventory. This seems to be an attempt to detract from the athletes sporting prowess and persuade the reader to view the athlete as a sex object - it certainly worked for me!

Some might say that a focus is placed on a part of the body which signifies femininity, thereby accomplishing the aim of perpetuating the notion that the female athlete is weak, submissive and less biologically equip to deal with the stresses of high-level sporting endeavor.

Other photos feature both athletes conveying their sexuality with red full-lips and long, blonde flowing hair. It appears that specific camera angles, and techniques, are used to display both Dementieva and Kournikova's femininity in its most desirable light.

A direct comparison between Dementieva and Kournikova is also given in this article. Two photographs (one of each athlete) are placed directly alongside one another. The photographs display what appear to be posed shots, with each athlete showing their shapely arms, shoulders and cleavage.

Dementieva is pictured in full makeup and smiling seductively at the camera while Kournikova is shown standing, long hair tied back, and wearing skimpy clothing which reveals upper legs, waist and arms. Below each photograph is a list of 12 largely irrelevant statistics - only four of them refer specifically to tennis.

Each athlete is asked whether they love their family, love themselves, and whether they would have dinner with their family. Their babe factor was also rated and their hair color was given: in the final analysis Dementieva was labelled a "gorgeous girl next door" and Kournikova a "sizzling sexpot," and, surprise, surprise, both athletes are blonde.

In light of reading this article I would say that even though the pictorial and textual portrayal of both athletes is somewhat of a distortion of reality, the public might eventually come to accept this distortion as truthful if the media continue to relentlessly present it as such.

Typically, the media, in my observation, employ separate strategies when reporting on men's and women's sport.

The Following Are Some Interesting Comparisons:

In this article I have attempted to outline some of the inaccuracies and absurdities committed by the media as they do their best to portray female athletes and their respective sports in a misleading light.

This article is based on personal observation and anecdotal evidence, not formulated through rigorous scientific enquiry, and as such, is really just a personal opinion, not established fact. However, it does seem pretty clear that women are presented differently to men in terms of sport reportage.

In no way am I pro-feminist or in favor of women's sport over men's sport. I love sport period, and have competed as a martial artist, boxer and bodybuilder. I guess being journalist I am more aware of inaccurate reporting and, have sought, in this article, to bring some of these inaccuracies out into the open.