Is Bodybuilding A Deviant Sport?

This article will review, and critique heavily, these findings and present a more balanced model, that puts bodybuilding in a more favorable light.

As bodybuilders we like to think that our chosen sport reflects who we are and the attributes of which we are blessed: strength, commitment, discipline, courage, passion and sacrifice. After all, does bodybuilding not require all of these things?

Indeed, working hard and sacrificing many of life's "pleasures" to reach specifically predicated goals requires strength of character unparalleled in many other sports. And this is just the non-competitive bodybuilder.

A competitive bodybuilder must balance many things to reach their physical targets while maintaining perspective if they desire to be psychologically and spiritually healthy also.

On the surface, bodybuilding seems a productive and worthwhile pursuit, eliciting a diversity of benefits such as improved strength, aerobic fitness, sound nutritional framework, confidence and low body-fat levels. Below the surface, however, many argue that bodybuilding, and bodybuilders by virtue of their involvement in bodybuilding, are deviant.

A deviant person is said to deviate from what is considered acceptable behavior in their particular social setting.

How could deviancy apply to bodybuilding, a seemingly non-problematic sport, you may well ask. This question has been debated in the sociological literature for some time, and the consensus among many sociologists is that bodybuilding is deviant by virtue of its practitioners behaviors (Weigers, 1998; Klein, 1986, 1993, 1995; Marzano-Parisoli, 2001; Pope & Katz, 1987).

In fact, academics who view bodybuilding through an extremely critical theoretical lens, tend to deny its benefits while focusing solely on the negative behaviors of a chosen few. Other academics, who chose to implement a more feministic lens, tend to portray bodybuilding as a male dominated sport, which perpetuates ideologies of masculinity and, in turn, reinforces hegemonic masculinity (derived form the patriarchal premise: the male of the species being in a position of power).

This article will review, and critique heavily, these findings and present a more balanced model, that puts bodybuilding in a more favorable light.

The Bodybuilding Sub-Culture & The Problems Therein

From 1979 to 1986, researcher Alan Klein investigated the competitive bodybuilding culture of four major Californian gyms. His findings, and subsequent articles (1986, 1993, 1995) based on these findings, assert that bodybuilders tend to be a sub-culture of insecure, steroid using, narcissistic, deviants.

He also emphasized homosexuality (hustling as it is, and was, called) and femi-phobia as being prevalent among the bodybuilders he witnessed. "bodybuilders are neurotically insecure and engage in a futile search for a hyper-masculine body image," said Klein. His studies, among others, have been used widely to campaign against the "problematic" nature of bodybuilding.

These studies, I believe, are fundamentally flawed as they are used out of context and do not account for the vast majority of bodybuilders, who enjoy tangible and intrinsic benefits for their gym efforts. Mekolichick (2001), in fact, found, in her quantitative study into bodybuilding behavior that, on the whole, bodybuilders do have very high levels of self-esteem and to live successful, productive lives.

Granted, there probably are a number of bodybuilders who engage in what could be described as physiologically and physically dangerous behaviors - namely obsessive behavior of which muscle dysmorphia might result, and excessive steroid use, possibly stemming from obsessive behaviors. These behaviors should be viewed in perspective, not in a biased, uninformed way, and bodybuilding's many positive aspects should be promoted. Thanks to forums like Bodybuilding.com they are.

Klein places much of his focus on steroid use and claims that the discussed problems stem largely from this use. The question that has to be asked is: how many bodybuilders do in fact use steroids? Most don't and enjoy near perfect health. Of the ones that do most of these are probably not even aware that such stereotyping exists and probably go about life normally, albeit with a much larger musculature.

Klein, in his article "Life's Too Short to Die Small" says "the bodybuilding complex depicts an insecure man, one filled with self-doubts about himself: his gender, his ability to be valued and loved by friends and family. And hiding behind a formidable looking fortress that he fashioned he can simultaneously hope to feel impervious to slights and doubts as well as take pride in something accomplished".

This does little to paint a realistic picture of the bodybuilder and one has to question Klein's motives on these points.

Marzano-Parisoli says that bodybuilders can be likened to anorexic persons in that they may be seen as "victims" of the extreme control of their bodies and of the contemporary construction of an ideal body image. This again marginalises bodybuilders as deviant, fighters against societies norms. 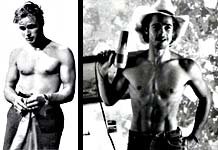 Compare the physiques of a young Marlon Brando vs a young Brad Pitt.

The natural body, according to Marzano-Parisoli, is seen among bodybuilders as imperfect. "Bodybuiders manipulate their bodies according to social and cultural dictates," she said. Bodybuilding to my mind will, on the contrary, transform ones physique into something able to function at an optimal level with improved circulation, strength, bone-density and, as an added bonus, a symmetrically pleasing appearance. Lets face it. Aside from the negative health effects, who would actually want to look overweight.

Cultural norms aside, how functional is a weak, overweight body. Can an overweight person, or someone with limited muscular strength, experience life to the fullest? Of course not. Making the most of ones biggest asset, their body, should be a number one priority.

Bodybuilding is thought, by some, to help insecure men assert their masculinity. White and Gillett (1994) for example say, "bodybuilding is a response to a crises in masculinity". Based on a study she undertook, Weigers similarly says, "by its promise of greater physical and psychological self-control, and aesthetic value, bodybuilding enabled the respondents to construct a superior self-identity that was premised upon Western cultural ideals of hyper-masculinity including power, authority and domination". Again, bodybuilding is shown as a deviant activity, worthy of condemnation.

Feminists have critiqued bodybuilding heavily justifying this critiquing through a perceived disruption in power balances; the male displaying dominant traits while the female, unable to challenge these biological realities, becomes further suppressed. 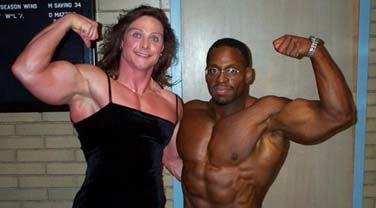 It is getting harder and harder for Men to use muscles as a way of seperating them.

Due to testosterones (a male sex hormone responsible for masculine traits: muscle, deep voice, aggression etc) influence, men typically will be more muscular and powerful in a physical sense.

Bodybuilding just intensifies what biology dictates. And again, what is wrong with having a fully functional, good looking and healthy body.

Bodybuilding has been looked upon by sociologist academics as a sport on the margins of what is acceptable and right. The sheer size of many bodybuilders could be considered abnormal, perhaps, but this is really the only comparatively deviant aspect to bodybuilding.

Conventional wisdom would tell us that bodybuilding is beneficial in many ways.

I would not dissuade anyone from beginning bodybuilding, but on the contrary, encourage its practice. Researchers may have particular axes to grind, as shown in this article, but this should not discourage anyone from reaping the rewards of bodybuilding.

Be sure to also check out:
The S.A.I.S. Mass-Building Routine!