What do you think of when you think of Bill Kazmaier? Does Big Kaz come to mind? How about 3-time World's strongest man?

What do you think of when you think of Bill Kazmaier? Does Big Kaz come to mind? How about 3-time World's strongest man? or the greatest powerlifter that ever lived or strength legend? How about WSM commentator? I usually think of his 661 bench (before the invention of bench shirts) when Bill Kazmaier comes to mind before his WSM title.

But Bill has accomplished a great deal and still stays active. Literally, if there was a god of strength, Bill Kazmaier would be it. I remember seeing Bill Kazmaier for the first time via one of the World's Strongest Man competitions back in the eighties. The Beer Keg event impressed me the most when Bill literally "tossed" the kegs into the back of the truck and keep in mind the distance between the kegs and the truck was a few feet while the other guy had to walk the first few.

I was literally blown away by this guy and the strength he had. He also walked into every event blowing his competition away. Nothing seemed difficult to this man. He's even gone on to set more strength records around the world, from curling 315 for 15 reps to being the first man to do all 5 MacGlashen stones to lifting the Thomas Inch Dumbbell and he set most of these records with little training. (Right: Bill lifting the Thomas Inch Dumbbell)

So I decided to get to know him a little more.

Bill Kazmaier grew up in Wisconsin where he excelled in high school football and was granted a scholarship despite his grades. He was sent to the University of Wisconsin where he then discovered his passion--lifting weights. At that point, Bill left school to pursue powerlifting full-time. In a short time, Bill at the age of 25 managed to win both the American Powerlifting Championships and the IPF World Championships in the superheavyweight class.

He also set a world record bench at 661 at the time as well (now the current is 700!). In the WSM competitions, I noticed that Bill has this unbelievable way of psyching himself up and made him into something superhuman. That was all done with self-hynosis! I thought it was amazing and I try to think about that everytime I'm under the bar. Bill also set at total of 2425 which would stand for years to come. 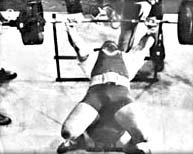 After dominating and making himself a legend in powerlifting, Bill decided to try his hand at strongman competitions. I remember when he started he didn't fare too well as few should in their first competition but Bill came back in 1980 (the year I was born!) and won his first WSM. He went on dominating for the next two years and as I said before he made the events look easy! He was then the first man to win WSM three years in a row!

But then during his reign, he suffered a pectoral tear, which would force him into retirement because he was too dominant in the field as it was. Bill had lost some strength during that injury but that didn't stop him from competing in strongman competitions. Bill was taken out of the WSM ring and while he was out he was still doing strongman competition that wasn't as known as WSM.

He returned to WSM in 1988 and 1989. Bill was dominant physically as well as mentally and in an organization that seemed to suit his competitors, he wore them down with his mind games as well as his "juggernaut"-like strength. Bill also did what's called "self-programming" which was telling himself that something wasn't heavy and that it was empty and after that, you would see one of the greatest displays of strength. Remember the Beer Keg even I mentioned earlier! 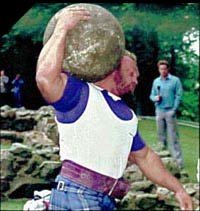 Bill is what champions are truly made of! Bill didn't just do mostly strongman and powerlifting stuff. He competed in football for a short stint with the Green Bay Packers and even did professional wrestling under the defunct WCW. But then Bill proved how "fake" wrestling was when he lost to a "lesser" man that he would literally destroy otherwise.

Bill still trains to this day and is even studied by those at the University of Auburn because of a theory that involved "sauropods". Bill's workouts are still quite superhuman.

He requires dumbbells over 100lbs for his arms to get any effort, 500 bench for 15 reps, 800 squat for 10 and 825 for 2 on deadlift. I told you in the beginning, if there was a god of strength, it would be Bill because the man has no equal.

Bill is still the physical specimen all powerlifters look up to, even at 46. I remember meeting Bill at a meet back in 2000 and must say he was a/still is a specimen to behold. The man tossed plates around like they were paperweights, it was amazing to see. He even did a strongman demonstration for the competitors there by bending a bar with such ease. I have to remember to scan the picture of him someday while I still have it!

In conclusion, Bill Kazmaier has the best combination of physical prowess and mental strength I've ever seen and was probably the first to do so as many others are following in his steps to this day. But Bill set the standard in powerlifting and in strongman which is why so many look up to him as a legend, like a modern-day Hercules. That's who Bill Kazmaier is.

I started bodybuilding when I first took look at Flex Magazine. I've always been amazed by muscles, even in comics.