Combine These Exercises For Insane Gains

Say goodbye to playing it safe in the gym; sticking to what you know you're good at is a recipe for stalled progress. Try these innovative exercise pairings to patch up the chinks in your armor!

Paired sets—like supersets, but without the "no rest between" stipulation—allow you to make your workout denser and do more total work. Of course, that's not very helpful unless you pair the right exercises together. After all, the point of working out isn't simply to do as much as possible in the gym; you're trying to get stronger, right?

That's where "Grit sets," which pair the movements you're strong at with others that address your glaring weaknesses, come in. I can pretty much guarantee you've got one—or probably most—of the weaknesses listed here. In some cases, Grit sets may actually make your strong lift stronger!

Rest briefly between exercises, but no more than necessary. And don't worry: None of the pairings will require you to hog equipment or be that jerk with multiple weights piled up around him!

Glutes are the new biceps; everyone wants to work them! I'm not just talking about bodybuilders and bikini competitors looking to bring a better package to the stage, either. Fitness enthusiasts from all walks of life want to look better in their jeans, but they also recognize how crucial glute strength is to their overall health and athleticism.

To perform this Grit set, start by hammering the glutes on lower-body training days, mixing compound lifts like deep squats and deadlift variations with isolation work like 45-degree hip extensions, barbell hip thrusts, and the donkey-kick machine. I also like to add in some additional glute work on chest day. Doing it is as easy as rolling over.

Alternately, you can focus your weakness work here on your hamstrings by performing single-leg hip lifts, where your foot is up on the bench and your shoulders are on the floor. Like hip thrusts, these don't require any special setup and can be progressed simply by adding a small weight to the loaded leg.

It can be hard to cram in enough shoulder work into one workout, especially if that workout also includes chest and triceps. In this case, I recommend adding in some extra shoulder work on a back-focused day. My favorite way to do this is by pairing vertical pulls like lat pull-downs or pull-up variations with dumbbell shoulder raises.

I like pairing these together for a couple of reasons. First, they're opposing actions at the shoulder joint, which allows them to be done back to back without interfering with the performance. 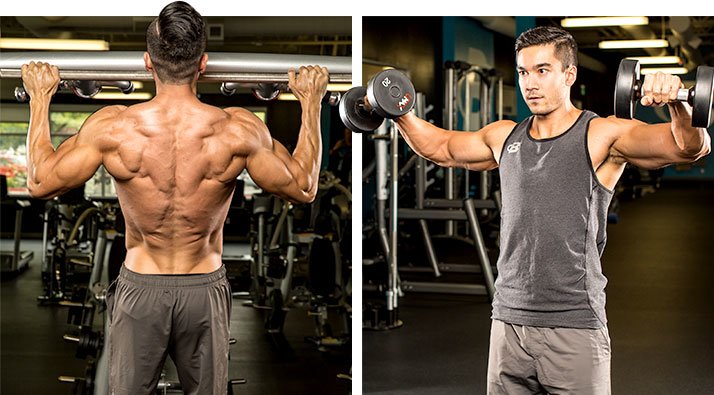 Pairing opposing actions at the shoulder joint allows them to be done back to back without interfering with the performance.

Bring the dumbbells over to the chin-up bar or lat pull-down machine so you don't have to walk around the gym and potentially lose your spot. This is especially important when you're training in a big-box gym at prime time, which is also why all of the sets provided in this article share this same quality.

Since it's a back-focused training day, the shoulder raises will be done second in the set, after completing the pulls. You can use pretty much any variation of dumbbell shoulder raises: front, side, or 45-degree raises halfway between.

A lot of what you do in the gym involves shoulder internal rotation. Nearly all pushing exercises, as well as a surprising number of pulls, put you in an internally rotated position. However, most people's programs lack targeted shoulder external rotationn work to balance it out.

Additionally, the movements that do manage to make it into programs—cable external rotations, band external rotations, and those little plate-wavey things—all kind of suck, to be frank. For example, when performing the traditional standing external rotation with band, it's easy to inadvertently substitute lumbar-spine extension—bending backward—for external shoulder rotation. It'd be hard to tell the difference.

You might think you're doing the exercise correctly, when in reality you're cheating the external rotators by not working them through their fullest available ROM. You're also teaching your body to use a dysfunctional movement pattern.

A few years ago, I figured out that the easiest way to fix this problem is to simply get on the floor and perform a supine band shoulder external rotation. It's a mouthful, but man is it effective!

Over the years I've had many clients and athletes tell me they feel that performing some light sets of the band shoulder external rotations in between their sets of heavy barbell or dumbbell bench presses helps their shoulder feel less tight and more ready to do the next set of presses. I don't know of any studies to back this up, but it's been my experience as well. So take that for what it's worth!

The glutes, hamstrings, and lower back aren't weaknesses for everyone. Plenty of people have seen the writing on the wall and gotten their backsides strong by using a combination of classic multijoint strength moves and targeted accessory work like barbell Romanian deadlifts (RDLs), single-leg dumbbell RDLs, 45-degree hip extensions, reverse hip extensions, and stability-ball leg curls.

Since all of those exercises essentially focus on the posterior core musculature (i.e., glutes and lower back), I like to pair these moves with anterior-core-focused (i.e., abdominal) exercises.

Before you go start blindly repeating the old "heavy squats and deadlifts are all I need to strengthen my abs and obliques" mantra, let me save you the typing time. No, they're not enough, particularly when it comes to the anterior core. Likewise, I'm not in the "no spinal flexion allowed" camp, due to a lack of convincing evidence that I should be. That said, I pair both flexion and anti-extension abdominal-focused exercises with posterior-chain exercises.

If you want something without spinal flexion, you've got options, too. Stability-ball stir-the-pots and single-arm planks are great anti-extension exercises to pair with posterior-chain work.

Strength: Triceps and lats
Weakness: Upper/mid back and rear delts

One of my go-to pairs on back-training days consists of performing a set of face pulls, then using the same rope to perform a set of straight-arm pull-downs.

This pair works well, not only because it allows you to hit two different areas of the back musculature, but also because both exercises can be performed back to back, in the same place, with the rope attached high on the cable column.

I also perform a triset of triceps extensions, face pulls and straight-arm pull-downs on occasion, as all three of these exercises can be performed in the same place with the same rope handles at the same high attachment point on the cable column. On a chest, shoulders, and triceps day, you can also just do some face pulls between sets of triceps extensions.

No matter where you do them, face pulls allow you to get in some extra volume for the rear delt and middle-back muscles, two areas of weakness and underdevelopment for physique-sport competitors, athletes and exercise enthusiasts—in other words, pretty much everybody in the gym.

Because the upper back and rear delts are such a common weak spot, you may benefit from an additional Grit set to target them. One of my most-used paired sets combines dumbbell biceps curls with dumbbell shoulder A's, which are a variation of rear-delt flyes that also target the posterior shoulders and middle-back musculature.

Here's how to perform shoulder A's:

Pair Up and Grit It Out

Using paired sets when doing total-body workouts for the purposes of maximizing strength is nothing new—it's just something that's widely misused. So if you're doing full-body routines, feel free to blend any of these into the mix and see if they're more effective at helping you maintain strength throughout your session.

However, these pairings are especially effective for body-part-split training programs. I use them regularly with clients and athletes who are interested in maximizing muscle development in their weaker areas. If you're not interested in that, just keep doing what you're doing. It'll catch up with you eventually!