Champions are made during preparation for Figure shows, but they are remembered by the crowns they wear on stage. Candice Keene can finally say she is Ms. Figure International!

We couldn't have asked for a more exciting and surprising finish to the 10-year Anniversary of the Figure International competition at the 2013 Arnold Sports Festival in Columbus, Ohio.

During prejudging it appeared that Stern and Keene were battling it out for first and second place, with Candice Lewis in third. The evening show and confirmation rounds told a different story, however.

Keene has made significant improvements to her physique over the last year by making it more streamlined and symmetrical while maintaining a good level of muscle tone. Candice's beauty, calmness, and confidence radiated through. She managed to steal the judges' attention and out-shined the rest of the competitors. This effort delivered her biggest title yet: Figure International 2013! 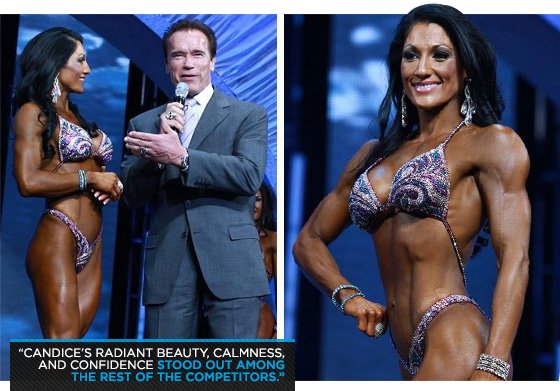 After pre-judging, fans and followers of the Figure division would have thought that both Stern and Keene were neck-to-neck in the battle for first, but that was certainly not the outcome. Stern finished a disappointing third. Erin appeared depleted and the lines and tone we usually see in her typically flawless physique were gone. This gave Heather Dees the shot to beat Stern for second.

Heather was happy with the outcome and the experience. After all, she beat several veterans at the Arnold! Even though she lacked the muscle tone we often see in other figure competitors, her gorgeous face and great presentation made up for any shortcomings. Watching Heather climb the Figure ranks proves that she is right where she belongs.

Candice Lewis followed closely behind the top-three finishers in fourth place. Many critics of the division had Lewis edging out Dees both during pre-judging and the confirmation rounds. It is still unclear why the judges chose one over the other. Lewis has one of the smallest waistlines in the industry and her symmetry is second to none.

With a top-10 Figure Olympia finish, we expected nothing less than a top-5 placing from this beauty in Columbus. In time, Lewis will place just as high at the larger shows as she has on the smaller stages.

Mallory Haldeman finished fifth, as predicted. Mallory's claimed fame via her tremendous leap from being a national-level amateur to earning her pro status, then performing extremely well in the pro ranks. This young lady is focused and hungry, and she is certainly taking advantage of her momentum. 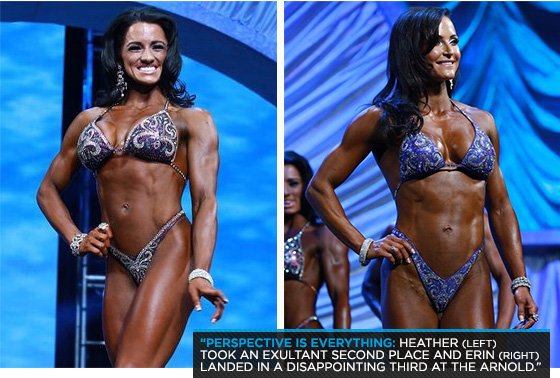 Camala Rodriguez, a veteran on the stage as a Fitness competitor, transitioned easily into the Figure division, making a splash with her fantastic physique. Camala has more muscle than most of the ladies we saw on stage tonight, but she managed to make it work well and used it to her advantage. She is lean and hard, yet when she hits her poses her entire physique flows beautifully.

There are a few ladies who deserve a mention outside of the top six finishers. Alea Suarez looked stunningly beautiful, lean, defined, and carried more beautiful abs than ever. If Alea loosens up and hits her poses with a little more flair, she is sure to move from the second and third callouts to the first group.

Nicole Sims made an impressive showing as the newest pro in the lineup. With a little more added muscle she could be dangerous in the pro ranks. Her 2013 Arnold invitation, and sharing the stage with the rest of the figure pros, must have been quite the experience for her.

Crowd favorite Ava Cowan looked stunning and greatly improved from her previous shows, yet she did not make the top six.

Figure veterans Gennifer Strobo and Cheryl Brown made incredible returns to the stage, both bringing their best package to date. 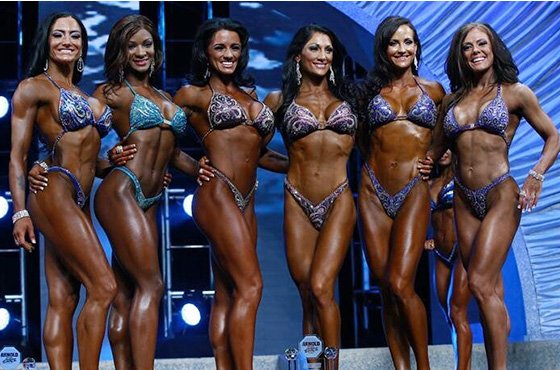 As the night came to an end, a new Figure International champion was crowned. Rest assured, Candice Keene's victory this year will be remembered. Congratulations to all the ladies who earned their Arnold invitation and competed with the best of the best to make history at the 25th Anniversary of the Arnold Sports Festival.

What began as a determination to get my body back into shape turned into a journey to compete and get on stage. I look forward to sharing more...