Bruce Lee: Legend Of The Dragon

Martial artist, movie star, author, philosopher, visionary, and bodybuilder, Bruce Lee commanded the world's attention - and his own inner powers - like no man before him, and none since.

Bruce Lee had heard enough. He didn't want to fight, but he was through listening to all the threats and challenges, and the time had come to silence all of it.

Nineteen years old and living in Seattle in 1960, Lee had already developed a serious reputation within the local martial arts community - a reputation that prompted a particularly annoying request from a tough young Japanese fighter looking to goad him into a brawl.

"This guy was a black belt in karate and judo," says Jesse Glover, Lee's first student. "He was fast, and his technique was excellent."

He also wouldn't let up on his harassment of Lee, sending friends to berate the young prodigy or stand in his way as he walked to class.

Finally, Lee agreed to fight the guy - on a racquetball court at the local YMCA with two of the black belt's friends as witnesses.

The Japanese fighter arrived in his all-white karate gi with his black sash tied to his waist. Lee showed up wearing street clothes.

The black belt assumed a tense karate stance at the beginning of the fight. Lee stood with his hands at his sides. The black belt threw a kick. Lee parried it, and then all hell broke loose.

"The guy was punching back, but his punches just weren't getting there. He came off the wall and tried to grab Bruce, but Bruce spun him and hit him with both hands - one in the face and the other in the chest - and the guy flew through the air and landed on the floor on one knee."

Lee closed the distance rapidly, then launched a front kick that ending up flush on the black belt's face with such force that he flipped over backward, ending up on his chest.

"I hollered, 'Stop!' Glover says, "and the guy was out cold. He looked like he was dead."

Bruce Lee was the Bill Brasky of his generation, and anyone who came into contact with him, even for a day, has a story.

Vic Damone, a popular singer in the '50s and '60s, experienced Lee's athleticism - and tactical genius - firsthand in 1968. Damone, at the peak of his stardom in the late '60s, assumed he'd hired the best two-man security staff money could buy - and he challenged Lee, a good friend, to try to get past them. 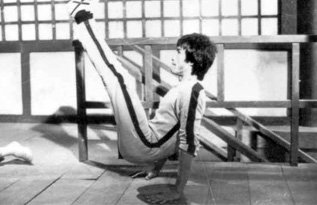 The idea, in accordance with Damone's standing orders, was to put Lee "on his ass and teach him a lesson." Lee, however, intended to offer a lesson of his own, telling Damone he intended to easily bypass his first bodyguard, then kick a cigarette out of the mouth of the second.

The cigarette, Lee said, would represent a holstered gun, and the bodyguard was tasked with taking it out of his mouth before Lee's foot could get to it.

And all of this, from entry to cigarette kick to a face-to-face showdown with Damone himself, would happen, according to Lee, in no more than five seconds.

The bodyguards, of course, didn't believe any of this was possible - and neither did Damone. They'd even taken away the advantage of surprise. They knew Lee was coming, they were ready for him, and they stood by the door, ready to pounce as soon as it opened.

The door, however, didn't open the way they thought it would. Instead, it exploded off its hinges and slammed into the first bodyguard with such force that it sprawled him out across the floor.

Lee correctly assumed at least one bodyguard would make the mistake of positioning himself too close, so he kicked it open. One down.

Then, before the second bodyguard could react, Lee's foot snapped up to his mouth and kicked his cigarette, which flew past the nose of an astonished Damone. Damone turned back to Lee, who was now standing an inch away, and checked his watch. Four seconds had elapsed.

His reaction was completely and utterly understandable: "Holy shit!" 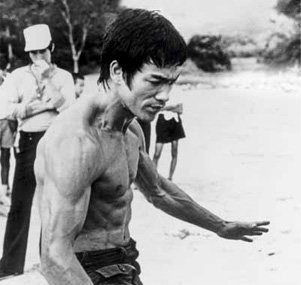 Bruce Lee wasn't a tough guy in the conventional sense. He was unquestionably a legendary figure in martial arts circles, but his look didn't come with the requisite hard-ass trappings.

He was small, clean cut, meticulously dressed. He didn't have any tattoos. Despite being obviously fit and athletic, he wasn't someone you'd move to the other side of the street to avoid.

"My boss told me Bruce was supposed to be the greatest martial artist of all time," recalls Mark Komoro, an art director for multiple martial arts publications.

"I grew up in the inner city of Los Angeles, and knew a tough guy when I saw one, and Bruce didn't fit the image. I wasn't buying it."

At their first meeting, Komoro wanted to see what Lee was capable of. They squared off, and Lee kept his distance, remaining more than 15 feet away. When Komoro moved forward to engage, Lee moved back-a tactic Komoro found curious.

"I asked him, 'How are you going to do anything from way over there?' " Komoro says. Before Komoro could react, Lee slapped him twice in the middle of the forehead. Komoro tried to return fire, but Lee was again standing 15 feet away. Even after readying himself for Lee's onslaught, Komoro was incapable of preventing the same thing from happening repeatedly.

"To this day," he says, "I've never seen anyone who could move so fast." 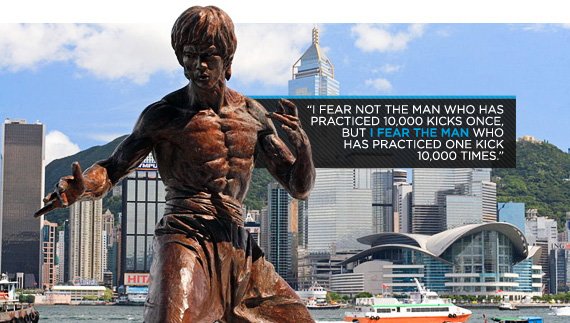 Their next encounter took place during a photo shoot involving several prominent martial artists - all of whom were significantly larger than Lee. The martial artists were throwing side kicks into an air-filled kicking shield held by Komoro, who was impressed with the force behind their blows.

Lee eventually sidled up alongside Komoro and asked him if he wanted to "feel a real side kick." Komoro braced himself. Lee, without a step-through or a running start - approaches the others had been using - jolted Komoro with a side kick that sent him 12 feet backward, eventually knocking him on his ass.

"I've been hit by a car before," he says, "but the impact of Bruce's kick was pretty similar. Not until years later, after meeting just about every famous martial artist in the world, did I realize how good he really was." 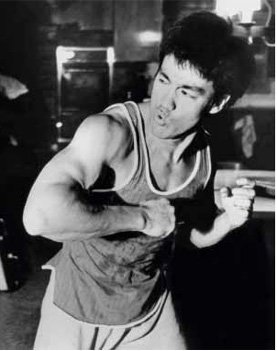 Aside from his physical preparation, Lee would always set aside time every day to train his powers of concentration and focus.

Legendary martial artist Bolo Yeung, who appeared with Lee in Enter the Dragon, visited Lee at his house in Kowloon in 1973, during a break in filming.

When Yeung entered Lee's office, Lee was wearing a headset plugged into a machine containing various knobs and dials. He was also sweating profusely.

Through one side of his headphones were coming loud noises - car engines and horns - while the other side produced soft, tranquil sounds like raindrops hitting a pond. The idea, Lee explained to Yeung, was to train to separate both sides so he could focus only on the soft sounds.

"He told me fighting is mainly practiced with one's attention on one person," Yeung says. "But in the street, one might be attacked by four or more people, so I want to have my senses heightened to be receptive to the slightest sound."

"Bruce also devised a particularly difficult exercise he called 'The Flag,' Yeung says. While lying on a bench, he would grasp the uprights attached to the bench with both hands and raise himself off the bench, supported only by his shoulders. Then, with his knees locked straight and his lower back raised off the bench, he'd perform leg raises. He was able to keep himself perfectly vertical in midair. He was incredible. In a hundred years, there will never be another like him."