The 2009 Fit Expo and Iron Man Pro was a spectacular success this year with energy and enthusiasm at every turn in the LA convention center.

The 2009 Fit Expo and Iron Man Pro was a spectacular success this year with energy and enthusiasm at every turn in the LA convention center.

During the Expo on Saturday and Sunday IFBB Fitness Pro Nicole Rollolazo and I had way too much fun working with the title sponsor Pro Fight giving away free samples, signing autographs, taking pictures and handing out over 5,000 T-shirts to all attendees! 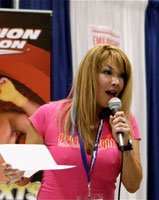 Click To Enlarge.
Brenda Kelly At The Fit To Screen Seminar.

On Saturday I was booked by Iron Man Magazine to host the video interviews around the entire Expo floor including the sponsor booths, fans and friends. My video team and I filmed fun video segments with ceo of Pro Fight and title sponsor Abbas Elmoussawi, cthlete representatives IFBB Pro Cathy LeFrancois and IFBB Fitness Pro Tanji Johnson of Gaspari Nutrition - who are both competing at this year's Arnold Classic, Bodyspace model search winner Allison Ethier from Bodybuilding.com, IFBB Fitness Pro turned fitness apparel entrepreneur Laura Mak, celebrities Raye Hollitt and Lauren Powers, expo fitness enthusiast Caron Carus, IFBB Pro Chris Comeir who is planning to return to the stage this year for all of his fans, Iron Man models Dave Goodin and Christine Pomponio, www.ProPTA.com CEO Joe Antouri and many more! Watch for the video on the Iron Man Magazine website!

We were all celebrating the 20th Anniversary of the Iron Man Pro Bodybuilding Competition, the 3rd longest running IFBB show in North America and the only pro show west of Texas this year. The Iron Man Pro show was a terrific taste of what the '09 year would bring to the Pro Bodybuilding stages with a tough battle resulting in the Iron Man Pro title going to champion Silvio Samuel and Moe El Moussawi taking a close second. Congratulations to all of the competitors for a wonderful show.

During the show Iron Man Magazine Publisher, John Balik was awarded a surprise (to him - we all knew!) special tribute of a notebook filled with letters of fond memories, stories and pictures with messages of congratulations from his many friends and colleagues in the bodybuilding and fitness world for his lifetime devotion to bodybuilding. Thank you John!

Another surprise award went to Lonnie Teper who received a well-deserved trophy for the best emcee in our sport.

An emotional tribute for our dear departed friends of 2008 played on the big screen wonderfully narrated by Lonnie Teper. We lost some great men in Ben Wieder, Steve Stone, Peter Segal and Kenny Kassel. They will be missed and forever remembered for their selfless contribution of friendship and love to our sport.

A fun addition to the night show was the Bodybuilding.com BodySpace model search competition finals. The online competition narrowed it down to 5 women and 5 men who were all there. Bob Cicherillo interviewed each of them onstage and we saw them compete in a quarter turn round. 1 man and 1 woman each won the chance to appear at this year's Bodybuilding.com booth for the Arnold Classic! Congratulations to my good friend Allison Ethier for winning the Bodybuilding.com Bodyspace contest! Allison and I have known each other for 10 years and competed with each other right from the start of my fitness career. I was so proud of her! She came in all the way from Canada and even had a photo shoot with one of my favorite photographers, Michael Neveux. Great job to all of the contestants!

On Sunday from 12:30 - 1:15 I gave my seminar called, Fit to Screen Insider Tips to Bring Your Talent to the Big Screen (In Honor of Kenny Kassel)

Click To Enlarge.
Fit To Screen - Insider Tips to Bring
Your Talent to the Big Screen.

Attendees were taught how to bring your talents from the stage to the screen with secrets from the inside! My Elite panel for this seminar session was full of experts who love bodybuilding and also work in the Hollywood/Entertainment film industry.

On the Seminar Panel of Experts:

Thanks to my wonderful panel for all of their incredible support and information. Thank you Jon Aiwazzi for the pics of the seminar. Thanks and kisses to my boyfriend Bob Bonham owner of Strong and Shapely Gym who came all the way from NJ. I couldn't have done this without all of you.

One of my favorite events was being head judge at The Fittest Couple Contest and Model Search. Couples are chosen for the finals on the day before. When on stage for the finals each couple has 4 rounds. Quarter turns; a short routine and 2 poses together, 1 fitness pose and 1 romantic pose. It is a really big crowd draw and huge motivator for many couples to want to start working on getting onstage for next year! The winners get a photoshoot with Iron Man Photographer the great Michael Neveux to appear in an upcoming Iron Man Magazine issue layout. Winners also receive $1,500.00! How way groovy is that? Grab your partner and start planning for next year's event.

Thanks to The Fit expo staff. This year was a fitness party! All of your hard work was appreciated by all of us and we can't wait until next year.

I want to personally thank Pro Fight for their generous sponsorship of the entire event. Thanks Abbas! Pro Fight rocks out!

Take care of yourself. You're worth it.
XO
Brenda