I have known the name and fame of Bill Dobbins ever since I got involved in the Bodybuilding/Fitness industry in 1998... Learn more about this popular artist and a side that many might not know about. Read on!

Is Bill Dobbins really playing his guitar and singing in a one-man show in Hollywood?

I have known the name and fame of Bill Dobbins ever since I got involved in the Bodybuilding/Fitness industry in 1998 (there wasn't any Figure category yet!). I met Bill back stage at the 1998 NPC Nationals and recognized his name as a top industry photographer and writer.

I remember I had been training really hard and had a case of laryngitis so it was difficult for us to talk to each other. He told me I looked like a JonBenet Ramsey grown up into a fitness competitor. I wasn't sure this was a complement or not however, as this was our first conversation.

I realized right away this man thought out side of the box. We all know the best artists are rather... let's say unconventional. I told him I was going back and forth from the Seattle area to LA and he invited me to contact him for a shoot.

I was thrilled and the next trip I took to LA we had our first physique shoot. The pictures he took of me not only blew me away, I found I really enjoyed Bill's company and advice he most freely gave me as a new competitor/model.

We have since done many more series of set ups ranging from a desert shoot on the way to the 2002 NPC USA's in Las Vegas (we drove from LA together and stopped to shoot along the way) to twosome shoots with my friends and even promo shots for my modeling career. You can view Bill's photography at www.BillDobbins.com and www.BillDobbins.net.

I remember my LA roommate IFBB Fitness Pro Nicole Rollolazo coming home from a photo shoot with Bill Dobbins with just one sentence: "Does he sing to you when you shoot together too?"

Nicole and I lived together for a time as we were both new to the LA fitness scene, both came from the Northwest where we competed together locally, saw each other at nationals around the country more than once where we met each other's families, had the same costume designer and as we both have Asian descent, it was natural we became fast fitness sisters. 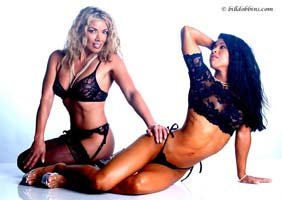 I had gotten used to Bill serenading me during a set up or change of set ups in between his shooting, so I was not surprised when I started hearing some of his models talking about his songs. This ranged all the way from confusion to pleasure.

When you are shooting physique shots, you are dieted down, dehydrated and can be semi comatose. All of a sudden in the middle of an important shoot... Bill straps on his guitar and starts to sing! I have asked some of his models just out of curiosity whether or not this happened to them as well. 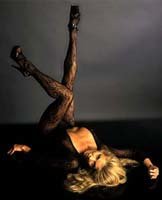 I didn't want to base any hearsay on just Nicole and I. Some would look at me like I was crazy and say absolutely no. Bill apparently didn't play and sing for everyone. I for one found it calmed me and I really enjoyed this other side of Bill.

I could tell it gave him a sense of centering as well and our photography sessions were all the better for this musical interlude. Many of us who have had the luck to be serenaded during our photo shoots would not even blink a false eyelash at the fact that Bill Dobbins had his first Hollywood engagement.

We all know the amazing artist he is with his camera and his words. Of course an artist is an artist and it is not at all uncommon to be great at many different areas of art if you think about it. Anyone who is extremely artistic as Bill is in one craft is not surprisingly just as artistic in another artistic talent.

It is like the sports hero you know who had the pick of different scholarships as a football star or baseball star, or the pop princess who also gets a top modeling campaign. Bill Dobbins is not only a top female physique photographer; he is also a stunning musical performer and songwriter!

Bill writes most of his own songs and in the future hopes to get a publishing contract for his writings. This is when you sell your songs to other artists, they play them and you receive a percentage of the royalties. It happens all of the time.

Many artists make just as much income or even more money selling the royalties of their songs than the income generated from writing and recording their own songs and releasing them.

Bill was booked at THE GIG in HOLLYWOOD at 7302 MELROSE AVE. I showed up with some friends to support him and to enjoy a musical evening. Bill played for an hour straight and it was clear he was no amateur at this. 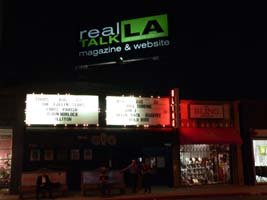 His voice, songs and stage presence was exceptionally entertaining and it was clear everyone was having a great time listening to Bill's original lyrics. His style is slightly Folk/Bob Dylanesk since his songs tell interesting stories while he strums his guitar effortlessly. 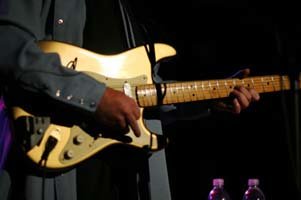 We were all proud of him, wild applause followed each song and the place was packed. Of course us lucky models he has been singing to for years weren't surprised, but I am sure others who came out of curiosity were!

Iron Man Pump and Circumstance columnist, Ruth Silverman was there and wrote in her blog about the musical evening event:

... After a long layoff from performing, during which he became that world-famous physique photographer we all know, Bill got onstage again just a few months ago. You'd never have known it from his strong performance of original songs the other night.

The audience at The Gig included an interesting array of Bill's friends from the bodybuilding world and beyond. Ironman publisher John Balik was there with his wife Stephanie and Scott Hagerman of CHEMI Nutra. Betty Weider, with iron game historians and Arnold Strongest Man organizers Terry and Jan Todd and Betty's niece Theresa Katz, also came out to enjoy Bill's performance, as did fitness celebs Cynthia Bridges and Brenda Kelly, writer Brooks Wachtel ("Dogfights") and director Jon Zeiderman.

Fitness model Viviana Soldano and actress Cassandra Creech, both of who have appeared recently in Ironman via Dobbins photos, were on hand, as were Robin Coleman, a former World's Strongest Woman contender, and a few other folks I didn't recognize across the darkened venue...

Thank you Bill for sharing all of your talents with us. We think you're amazing!

Check out the musical side of Bill Dobbins at these links:

Additional Information About "The Gig" & Bill's Success On The Stage

The Gig in Hollywood had a common format for one of their weekend nights with 3-4 bands/acts booked and starting at 8:30 PM. Bill told me he knew his audience and took the first spot so people could come out to dinner, watch his show and be home by 10 or 11 PM. Us workout crowds have lives of training, schedules - some of us have babysitters and many drove from San Diego or the Valley to see him!

Each headline musical act has 40 full minutes of actual performance time on stage. The 1-hour time slot includes setting up and breakdown for the next act. Bill started off the night with a menu of 10-11 songs ready to go.

One of Bill's personal favorites is: "What have they done to Route 66?" It reminds him of the time he drove out to LA with his parents for the first time on the famous route. The audience appreciated Bills range from many types of music. There were songs and vocals ranging from country, ballad, folk and even some soft rock.

When Bill was tearing down, the lead singer of the next rock band came up to Bill and complimented him saying he loved his songs and admired his performance that evening.

Bill contracted his booking at "The Gig" through the internet. They require a level of professional playing for live audiences. Bill has been re-training his old skill at coffee shops with the Open Mike concept - You and 20 other people show up and you may get to play 2-3 songs.

Famous artists like Bob Dylan got started by playing at Open Mike events. Anyone and everyone can get up there no matter how good or bad you are. After your performance, the hope is that you can get an invitation to play an hour show by the manager/owner who will book you personally for more time - about 40-60 mins of just you during the week.

These are obviously ways to build your name, expose your music and promote yourself to try to get a national following and a recording contract. All of this has been happening for Bill Dobbins!

Do: go see this modern day old school artist who has captivated his audiences with his photography.

Don't: be surprised if you get caught up in the music like we were! 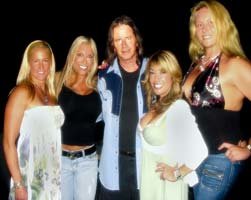