The Texas Rattlesnake said he'd be back on stage in Columbus. Branch Warren defied the odds once again and recaptured his Arnold Classic title.

The Texas Rattlesnake said he'd be back on stage in Columbus. Boy, was he ever! Branch Warren defied the odds once again and recaptured his Arnold Classic title and added one more Most Muscular Trophy to his shelf AND added the Most Entertaining posing award to boot.

Here are the final results and the amount of money each competitor received:

The roar of the crowd at the Arnold Classic is good indicator who the top finalists will be. According to my unscientific "roar-o-meter," it was obvious that Branch Warren, Evan Centopani, and Dennis Wolf were vying for the top-three spots. It was close between Evan and Branch with Dennis Wolf a distant third. (I'll give Team Pak-Man an honorable mention.)

Branch Warren is unbelievable! He had surgery on a torn quad tendon a few months ago. I've had tennis elbow longer than that! He bounces back from injuries that end the careers of other competitors. How he does, that I'll never know ...

Warren displayed tremendous muscularity combined with an incredible degree of conditioning. Even the striated hamstrings were there tonight too. As I've stated before, Branch isn't the prettiest physique up on stage, but he's always the most rugged looking. He isn't carved out of marble but he's been blasted out of granite.

I asked Dennis if he would be using his secret weapon of Reese's Peanut Butter Cups for his pump-up carb. He smiled and said he wasn't using them this year — just his normal diet food. I guess normal food was the secret weapon this year.

Wolf again displayed his dramatic V-taper from wide lats and narrow hips. He treated the crowd to a classic and refreshing posing routine. I thought his color was improved from last year, despite a few drips here and there.

I thought it was close between Wolf and Evan — really close. Wolf seemed to tighten up right at the end and Evan faded just a bit and I think that was the clincher.

About 30 minutes before the judging began this afternoon, Evan was chowing down on chicken, potatoes, and rice — perfect carb-up food. He must have eaten more after the judging because I thought he improved for the night show. He was tight, full and polished. His coloring was much darker than last year too. Evan looked better than last year and better than the judging, but I thought he faded just a little during the evaluation comparison.

Evan's posing and presentation was improved from last year. He obviously has been working hard on that. His routine was performed to music from one of the Rocky movies — Rocky IV, I think. He did a variety of 3/4 back poses a la Arnold. Evan looked very good in those poses. My wife, Rosemarie, summed up those poses as, "Nice!"

Big Ben would have been given the "most enthusiastic" award if their was one. He truly was excited to be on the Arnold Classic stage in great condition.

I have to hand it to Dexter, the guy is very consistent and he always has been. He's off the mark from a few years ago, but he is almost always a shoe-in for a top-6 finish in the Arnold Classic or the Olympia.

Like I stated in the judging review, Lionel was holding some water. Once he finds a formula to tighten up, this guy has a strong possibility of winning this show in the future.

Evan Centopani, Lionel Beyeke, Dexter Jackson, Branch Warren, and Dennis Wolf were the six finalists. They were lined up for one final comparison and then it was time for the posedown. To me it looked like Branch had it and Evan might take second with Wolf third, but I wasn't sure. Wolf tightened up from the front, but his smooth hamstrings leaped out as did his small calves; Evan still looked a little smooth overall as well. Branch had tremendous thickness and he makes anyone's legs small and smooth. This was one close show for second and third place. 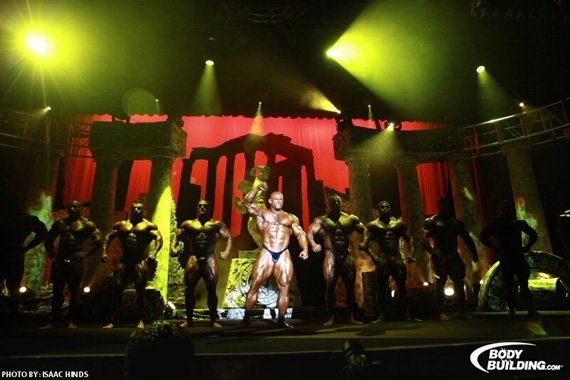 Like his namesake the "Texas Rattlesnake" has struck down his prey.

Robert Kennedy was the recipient of the annual Lifetime Achievement Award. Kennedy is the publisher of Muscle Mag International and several other fitness-related magazines. In the 1980s Muscle Mag was my favorite magazine. I loved it. He also published one of my favorite bodybuilding books, "Beef It!" Congratulations, Mr. Kennedy!

Fouad Abiad wasn't available for the evaluation round at the finals. At the time of writing I wasn't sure what happened. I did speak to him right before the judging and he wasn't feeling well at that time.

Gustavo Badell was on stage again tonight, but he wasn't in his top form. I had suspicions he wasn't feeling well. His wife was fanning him with a towel prior to the judging. That seemed a little strange considering the weather in Columbus was very cold. (I'm sure a few didn't think it was THAT cold, but hey, I'm from Southern California!)

Shawn Rhoden did a nice, flowing routine to a Whitney Houston song. I guess you could consider that a tribute to the late famous singer.

The Strongman competition was again held during the night's acitivities. As always the event this year, The Timber Carry, was a big hit with the crowd. They had to carry an 885-pounds of a wooden contraption up a wheelchair-grade ramp. Whoever does it in the fastest time wins. Seeing this live is incredible. The winner was Michael Jenkins and received a check for $55,000. Michael's secrets of strength are yoga and Zumba classes! (That was a joke, guys and gals.)

The 2012 Arnold Classic was another remarkable production. It had variety and was entertaining to everyone in the crowd. Arnold was Arnold, cracking his jokes and everyone cracked up each time. Congrats to Branch Warren on a well-deserved and hard-earned title!