The 2011 lived up to its hype and then some in Columbus.

Living up to the massive pre-contest hype it has generated each year since its inception in 1989--when a young lion named Rich Gaspari won its inaugural men's bodybuilding showdown--the 2011 version of the Arnold Classic didn't disappoint. In fact, 22 years after the "Dragon Slayer" won the first ever AC, we have another winner known for his amazing conditioning and tremendous work ethic.

The tremendous pressure to win hoisted upon the shredded shoulders of eventual victor Branch Warren, coupled with his many close calls at this show over recent years, had, it appeared, given him additional motivation to bring his best competitive look to Arnold's 2011 party. This gave him all he needed to finally accomplish one of his major career objectives, and left his competitors battling for second place.

From third through to sixth position placed competitors who, though contrasting in their individuality as far as size and shape were concerned, each held a strong chance, in this writer's opinion, of seizing third place.

They were also all well prepared to win, yet did not bargain on two behemoths owning the two top spots throughout the show. 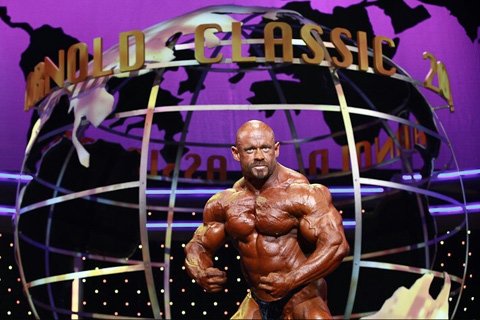 From Victor Martinez in third through to Ronny Rockel in sixth, the 2011 Arnold Classic comprised quite possibly the best-conditioned, most-muscular lineup of any era.

While first place deservedly went to an all-time best Branch Warren, second was strictly reserved for Dennis Wolf, as hard as the remaining eventual top six persisted in knocking on that particular door.

(Many spectators have since argued that Wolf would not have looked out of place as the new Arnold champ.)

Overall, the 2011 Arnold Classic provided a few surprises (most notably coming from those who failed to fulfill their potential this time around) and confirmed many predictions (Branch's win and the falling back in the ranks of former champion Dexter Jackson).

Here is my review of how it all went down in Columbus:

Yes, Branch Warren has freaky size. Yes, he always comes in shredded and grainy. Yes, he has the best legs in the business. The difference maker has become his dramatically improved stage presence, which has improved immeasurably over recent years. Once almost self-effacing onstage, Branch now presents as one in total control.

His domination of this year's Arnold Classic line-up was due in no small part to his ability to hit his poses with intent and to highlight his strengths while downplaying his weaknesses, a la Dorian Yates.

From the first step he took onstage right up until his name was announced as winner, Branch was in command.

And yes, his freaky size and shredded conditioning and unsurpassed leg development carried him through. The significant improvements he had made in overall balance also helped plenty. Branch Warren: your new Arnold Classic champion. Finally.

The German giant, Dennis Wolf, who in more ways than one dwarfed his 2011 Arnold peers, sent a clear signal that he is for real. With improved balance, characteristically freaky size, and some of the best conditioning onstage, Wolf had the fans on their feet. His posing routine was inspiring as was the overall impact his physique made.

Though in the minds of many Dennis Wolf was the 2011 Arnold Classic winner, these people miss the point. He simply was not next in line: Branch Warren was. And Branch was harder and more muscular overall, qualities that on today's pro stage are increasingly rewarded, often at the expense of shape.

Wolf will be back at this year's Olympia, stronger than ever and ready to further turn up the heat on his competition.

Returning from a disappointing eighth place finish at the 2010 Mr. Olympia, 2007 Arnold Classic champion Victor Martinez was intent on salvaging respect. He did just that with an excellent showing at this year's AC. Arguably at his all-time best, Martinez was hard, dry, and as muscular as he has ever been. He was also extremely confident and, judging from his onstage manner, certain that he would win another Arnold title.

Having over both Branch and Wolf the edge in balance and proportion, but not in pure mass and peeled conditioning, Martinez presented to the judges a different proposition compared with his closest 2011 Arnold rivals.

Ultimately he was placed third but he could easily have switched positions with Wolf, who may have had a slight edge in overall presentation (he did, after all, win the best poser award). With a few minor adjustments, Victor can be back in the winner's circle some time soon.

Speaking of new breed of competitor, Evan Centopani is running hot, having already won his first two pro events, the 2009 New York Pro and 2011 Flex Pro Bodybuilding Championships. On the strength of these victories alone, many were picking him to clean up at the 2011 Arnold Classic. This wasn't to be.

He had not been adequately tested against the sport's best. Facing off against the always-dangerous Victor Martinez, a much-improved Dennis Wolf, and Branch Warren did not improve his chances. When the final placements had been called, he found himself in the unfamiliar position of fourth.

That said, he held his own and didn't look out of place in such esteemed company. With his best conditioning yet, balanced mass, and a great deal of fight, Centopani showed he could hang with the sport's best. It can only get better from here.

Since pro bodybuilding became inundated with size monsters in the early 90s, the smaller competitor has typically fallen by the wayside. But there will always be one or two top-tier champs who, despite their comparative lack of freaky size, shine regardless. Dexter Jackson is one of these competitors; so are legends such as Lee Labrada and Shawn Ray. However, these gentlemen must be right on the money conditioning-wise to maintain their winner's status among the giants.

Unfortunately for Dexter Jackson, the conditioning that has so often defined (no pun intended) his performance appears to be diminishing. What we saw onstage at the 2011 Arnold was a carbon copy rendition of the same old Dexter Jackson physique but with a few less cuts.

Erratic conditioning and physical sameness will no longer suffice for the former Arnold champ. Blessed with aesthetics seldom seen in the pro game, as well as presentation skills par excellence, Jackson will always please crowds. But he'll need to present his usual shredded shape along with a few more mass gains to challenge the new breed of competitor.

Breakthrough athlete of 2010, Ronny Rockel continues to elevate his status among the IFBB pro elite. His sixth-place finish at this year's Arnold Classic underscores the threat he poses to any field. He was the most balanced competitor onstage, and if the show were judged on proportion alone, the title would now be his.

However, mass counts significantly in the final analysis, and freaky size is the only thing Rockel lacks. Though his pro-level size is accentuated by his sublime shape, small joints, and conditioning, he's simply no Branch Warren when it comes to mass. However, I think it's fair to say that purists wouldn't have argued had Rockel been named winner of the 2011 Arnold Classic. It would have been a pleasant change.

Redemption for Johnnie Jackson, who had placed a disappointing 12th at the 2010 Arnold Classic, was sweet, as he claimed seventh in the best Arnold lineup to have posed down in quite some time. Jackson was back to his best form: ripped, hard, and as muscular as can be. His signature monolithic back and shoulders were evident, as was his excellent onstage presentation.

Confidence has never been a problem for Johnnie; he conveys a winner's persona. A pro bodybuilding veteran, Jackson, perhaps paradoxically, seems to be getting better with each year and shows no signs of slowing down.

Will he ever win a major title such as the Arnold or Olympia? Probably not. Yet Jackson remains one of the IFBB's most popular athletes.

Also picked as a potential threat to challenge for the top placements at this year's Arnold Classic, Roelly Winklaar quite simply missed his mark. He arrived with conditioning and presentation skills that will not cut it on a stage as prestigious as the Arnold.

An impressive competitor with some of the biggest arms in the sport, Winklaar is virtually guaranteed a positive crowd reception regardless of whether he nails his conditioning. When you are competing for the big money at the Arnold Classic, however, you had better be shredded (something this year's top six certainly was) and ready for victory. Winklaar was neither.

He will undoubtedly be back bigger than ever; if he can improve his conditioning and overall balance there is nothing to stop him from some day being one of this show's true frontrunners.

The 45-year-old old warhorse has competed each year since his first pro show in 2003, and he continues to impress by balancing outstanding symmetry with quality mass. Unfortunately for the man who was once regarded as being a future Mr. Olympia threat, he's playing a different game now with many hungry, and younger, competitors.

Picked as a dark horse to win the 2011 Arnold Classic, it was clear from the first time the X-Man walked onstage at prejudging that he would be out of the six. He had the proportion, width, and height.

But with the new criteria appearing to reward insane conditioning (something he has always struggled with) and freaky size (something he has never had) it's probably going to be difficult for big Toney Freeman to reclaim his former glory.

Ben Pakulski appeared to present a sharper but smaller look compared to the full, ripped package he brought to the 2011 Flex Pro, where placed fifth. When he nails it he'll be a top contender, but he received a wakeup call at this year's Arnold Classic that will have him back in the gym, redefining his physique for future competitive outings.

More upper body size to counterbalance those massive legs will no doubt enhance the overall flow of his physique, as will crisper conditioning. Still a young competitor, he has the time to make the necessary adjustments before dominating the pro scene.