Mike O'Hearn is an atypical Renaissance man: he can entertain, inform and crush you.

Mike O'Hearn is one of the most accomplished athletes in the fitness industry. He has the unique knack to transfer his talents from the weight room to the stage to the screen.

Mike won four Natural Universe Bodybuilding Championships, was named Fitness Model of the Year seven times, and is the only 'Titan' to be on both the original American Gladiators series and the second coming of the series. 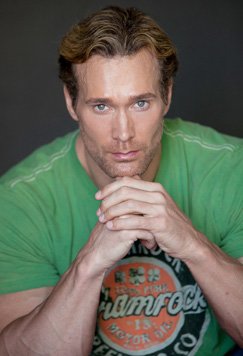 He is an actor who also set the world record for breaking the most consecutive panes of glass with his head… twice.

This real-life Superman is now the Captain of Team Magnum and is a Team Bodybuilding.com member. His Power Bodybuilding training system helps wannabe superheroes across the universe reach greater levels of strength and muscularity.

As a citizen of Earth, O'Hearn also finds time to speak to children and volunteers for charities.

We must ask, what has Mike NOT done? Well, he hasn't been named BodySpace Member of the Month … until now!

He can now add this honor to his ever-growing and prestigious list of feats.

Q
What led you to the decision that you needed to get in shape?

I got my start because of my family. My dad was a football player, and a bodybuilder, and my mother was an artist. She believes that you should always, in this life, live your dream. In a family of 10, being the youngest boy, I was getting my ass kicked on a daily basis.

Not just from my brothers; my older sisters were tough, and they kicked my ass too. Besides my brothers doing bodybuilding and powerlifting, so did my sisters. Everybody was required to do martial arts.

Being the youngest boy, I was usually the punching bag. So, you tell me, if I didn't start powerlifting, what the heck was I going to do?

What kind of changes have you made since you made that decision? 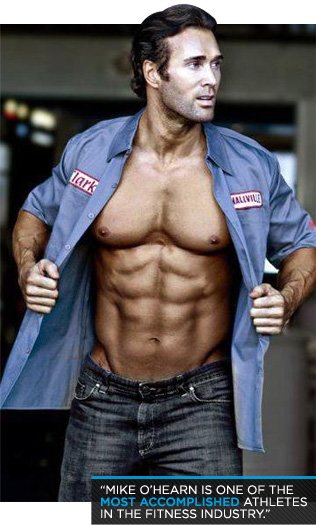 I bet this question applies to a lot of people on here. I would have to say my peer group. Only thing is, I was about 13-years old when I chose friends who were into martial arts, strongman, powerlifting and bodybuilding.

That's basically what you guys are doing here for people, because everyone on here is serious about health and fitness. That really helps everyone else stay on track.

How did you discover BodySpace?

I was introduced to it by Ryan DeLuca. Ever since that day I've been on there meeting other die-hards like myself, that have the same goals when it comes to health and fitness.

How do you think BodySpace has helped you reach your goals?

Well my goal was to help more people, and teach them my style of training. It has definitely done that, especially with my own Power Bodybuilding group, changing lives.

I love to know that I'm doing that. It feels great to give back, and see people who are so committed reach a level of health and fitness they never knew they could.

What is your favorite feature on BodySpace?

I think it's just the overall concept. These are people who are not on there to play around. They want your knowledge, and they have a need to get in shape.

As a leader in the industry, that's why I'm there -- to help motivate people. I want others to have the same success I have in health and fitness.

What are your favorite supplements?

All of my products, I get from MAGNUM. It's a company that makes high-end vitamins. They don't skip out on what's important just to make some cheap product. I take DNA, OPUS, Quattro, Thrust, and Glutamine.

What training mistakes did you make when you first started?

Going away from what worked for me for years, because people were telling me I was doing it wrong. I was young, and naive, in the same sense.

I did try all different types/methods of training. I guess I wouldn't know what worked for me best if I hadn't done that. So it's an oxymoron. 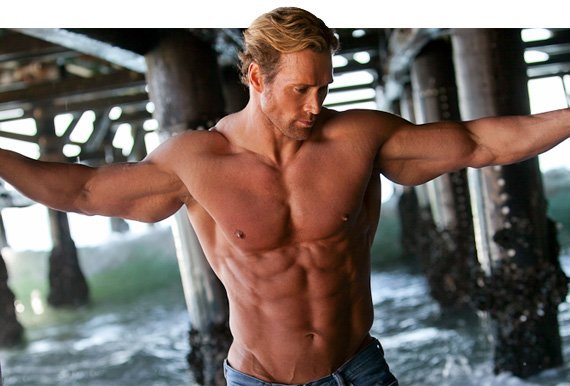 Like Atlas before him, Mike "Titan" O'Hearn holds up the world.

What has the biggest impact on muscle growth and recovery?

It is definitely nutrition first, recovery second and training third. If anyone tells you different, they're trying to sell you something.

What type of music do you listen to in the gym?

I don't. Don't roll that way. I don't work out; I go in to do battle. Motivated people don't need music.

What is your most memorable movie / television appearance?

Being on the Jay Leno show. He's just a great guy; I had a great time. I mean, come on, it's the Jay Leno Show. The only thing that would have topped that would be the Late Show with Dave Letterman.

You've been on more than 500 magazine and romance covers. Did you travel to many 'exotic' locations for any of the cover shoots? If so, where was your favorite place to visit? 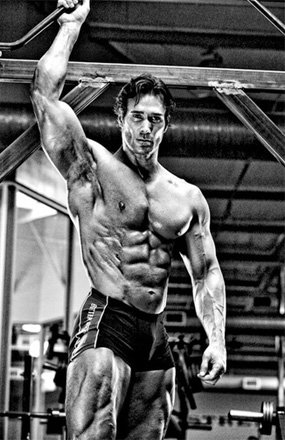 Man, I would like to say I did. I've traveled all over the world, but that was more for movies, TV, commercials and competitions, and for a lot of the fitness magazines.

I shot in Hawaii, or Cabo San Lucas, but for the romance covers I shot everything in Manhattan, New York City, where I love to visit. I live in California, and for me New York is fun to visit, I just wouldn't want to live there.

Let me give you a destination, though it's not related to shooting covers. I did a movie called Barbarian in Russia and Lithuania. To this day, these two places were the most amazing.

I was filming, so I saw a lot of the countries. The location scouts did a good job, the movie being called Barbarian, you can imagine the kind of countryside I was in.

The castles, and being able to do all this on horseback, solidified the value. I wouldn't be able to top it with just a basic trip to Hawaii.

Someone will read this feature and consider joining BodySpace. Why should that person become a part of the largest fitness social network?

Well, you just said it. It's the largest fitness social network. Where else are they going to find a community of people with the highest number of health and fitness fanatics?

Is there anything you would like to say to your fellow BodySpace members?

You can also find me online at www.MikeOHearn.com, www.twitter.com/MikeOHearn, www.facebook.com./MikeOHearnOfficialPage, and also I'm really excited to have your fans be some of the first people ever to see a project I developed.

I wrote and produced a web TV show called Alter Ego, and there are 6 episodes, and you guys get to see the first right here. There is a good chance this could become a feature film! 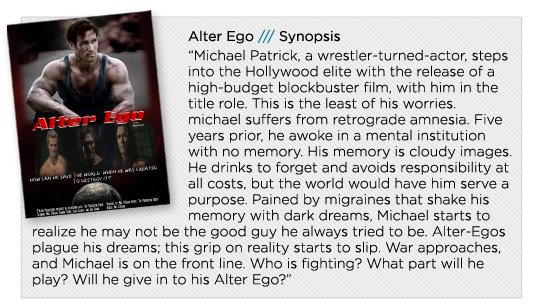 What workout routine has worked best for you? 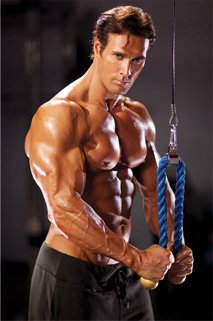 I'm a big believer in the Russian style of training for powerlifting. I've taken the benefits of powerlifting, and truly the basic exercises from bodybuilding that work, and combined them to create my own training program called Power Bodybuilding. This is how I recommend most people body build.

However, most bodybuilders are not strong, so they don't like the idea of the powerlifting exercises. If you are interested in seeing more of my training videos, check it out on www.Facebook.com/MikeOHearnOfficialPage.

Do you recall some of the funniest moments in front of the camera? If so, tell us about one or two?

Oh my gosh, of course. It was my first interview with HardCopy, which is like Extra! I have no idea what came over me for that shoot.

I guess I was putting a lot of pressure on myself because, as soon as that camera went on and they started interviewing me, I didn't freeze up. Instead I got long-winded, or "chatty," if you will.

When I was saying things, I could hear it in my head, my own voice screaming, "You are an idiot!" I was saying some of the silliest things. We filmed for 6 hours that day, and when I finally saw the interview on the TV, they cut it down to where the only thing I said in the interview was, "I'm Mike O'Hearn, the new Topaz man!"

Maybe you had to be there, but it was one of those that I still remember to this day, and laugh about.

Yes, I'd love to talk about the charities I've been working with. Recently, I was lucky enough to be asked by Matthew McConaughey's Foundation "J.K. Livin' (Just Keep Livin')" to work with them.

It's nice to be in a position where people look to you for guest speaking, and teaching the youth of today how I've succeeded in my career, stayed on a good path, and lived my dreams. It's true what they say -- it feels good to give back.

I also do some work with Good Dog Animal Rescue, which is based here in Los Angeles. This one is my passion -- anything I can do to help misplaced dogs. I just have a bond with animals, but especially dogs. 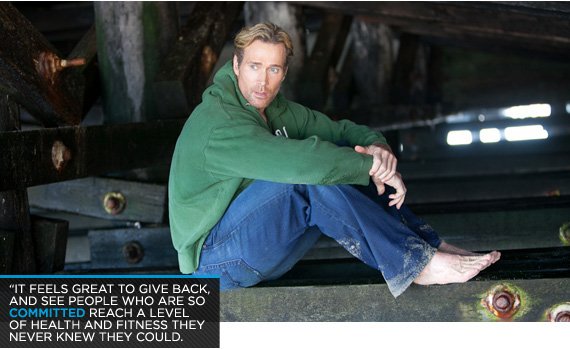 Hands down, steak burrito. Yes, that's with extra steak. Actually, it's with an extra burrito on the side.

Most definitely it's my vanilla ice cream, with strawberries and Nutella.

Dark chocolate. I actually keep a cup of dark chocolate covered espresso beans in my freezer. I get 3 per day.

Do you have any pets?

Do I have any pets?! Hmmm, oh yes! I have 4 incredible dogs. I have my Akita, Elvis; my Husky is named Stryker; my Ridgeback, Bunny; and my Chow, Teddy. 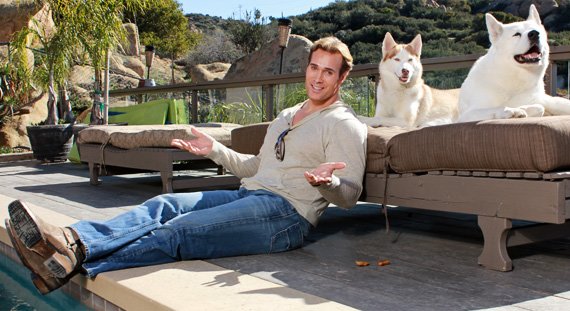 Even Titans need time to play with the pups.

It's a funny story how I got Teddy and Bunny, who I have had for quite a while. I did a cover story photo shoot for Muscle and Fitness. Yeah, this is where I got two babies. Teddy on the left and Bunny on the right (photo included). Yes, they were "props" that Muscle and Fitness provided.

However, after shooting with them for 8 hours, I was under the assumption they were somebody's puppies, but when the shoot ended, the photo coordinator said had to "take the puppies back to the pound." I said, "You ain't going anywhere with these two."

I handed her two hundred bucks, and said they're going home with me, which was more than I probably got paid for the shoot, which is okay with me.

What profession, other than yours, would you like to attempt?

If heaven exists, what would you like to hear God say when you arrive at the pearly gates?

Man! You were fun to watch!