Boise, ID - February 7, 2013 - It's already being called one of the most anticipated events in the history of bodybuilding and fitness. Arnold Schwarzenegger, star of the new film "The Last Stand," is bringing his annual Arnold Sports Festival back to Columbus, Ohio, the weekend of February 28-March 3, 2013. Under the direction of promoter Jim Lorimer, about 175,000 visitors are expected to see 18,000 athletes compete in more than 45 different sports and events! 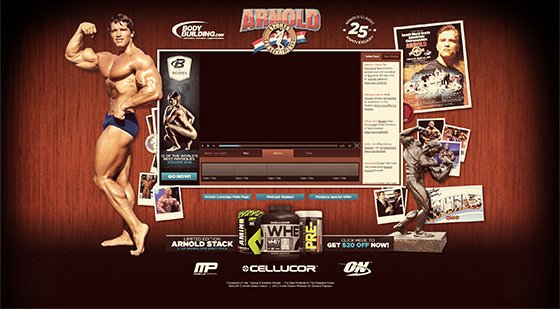 All eyes will be on Dexter Jackson as he looks to tie Flex Wheeler's record of four Arnold Classic Titles. Iris Kyle, Erin Stern and Nicole Nagrani will also return, attempting to re-claim their spot in Arnold's coveted winner's circle.

To view the webcast, visit: streaming.bodybuilding.com/2013-arnold-webcast/

Presented by Cellucor, Optimum Nutrition and MusclePharm, the webcast coverage begins, exclusively at Bodybuilding.com, on Friday at 7 p.m. ET with the Ms. International, Fitness International and Figure International Finals, preceded 10 minutes prior by commentary on the women's prejudging rounds from earlier that day. (Video-On-Demand footage from the Friday women's prejudging events will also be available as soon as feasible.)

On Saturday at 2 p.m. ET, be sure to return to Bodybuilding.com for the exclusive LIVE coverage of the Arnold Classic and Bikini International Prejudging rounds.