With one of the best lineups of athletes in the contest's 49-year history and more than $1 million in prize money, the 2013 Olympia is a must-see event. Thanks to the live webcast, everyone can tune in - for free!

The live stream kicks off Friday with an insightful pre-show hosted by veteran sports broadcaster Dave Farra (SyFy, Fox Sports, NBC) providing the play-by-play of the competition, as well as panel hosting with some of the leading experts in the industry. Returning for the 2013 broadcast will be one of the most trusted voices in the bodybuilding industry, Larry Pepe (Fox Sports), in addition to physique coach Dr. Layne Norton and special celebrity guests Lou Ferrigno and 8-Time Mr. Olympia Ronnie Coleman. 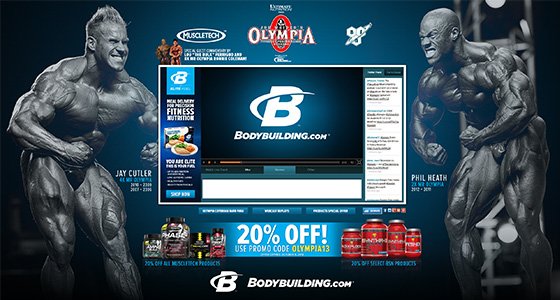 
Filling out the robust lineup will be top female physique experts Felicia Romero and Carla Sanchez, who will provide expert insight into the women's competitions of figure, fitness, physique, bikini and bodybuilding. Whether you've been at every Olympia, or are tuning in for the first time, this year's show promises to deliver an insider's perspective with two exciting days of coverage of the biggest bodybuilding competition of the year!

The Saturday coverage will also include the beautifully sculpted women of the Figure Olympia and the men's 212 Showdown (men's bodybuilding division under 212 lbs in weight). Pre-show discussion and post-show interviews, as well as the annual Fan's Choice Award, will also be made available thanks to Travis Chapman.

Be sure to check out all of Bodybuilding.com's comprehensive 2013 Olympia Weekend coverage at:
https://www.bodybuilding.com/fun/2013-olympia-weekend-coverage.html