Phillip realized alcohol and poor choices may put an expiration date on him. He dramatically swung his life in another direction, toward fitness, clean living and abs! 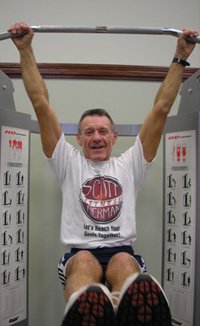 I was sitting in my dentist's chair for a routine cleaning and for some reason he had started to monitor blood pressure. Mine was over 200/100, even the machine didn't believe that reading as it tried to take it several more times. My level of anxiety went up and so did the reading until I said STOP.

This was a wake-up call for me. I was drinking way too much and being 62 years old I felt that I needed to do something to address this. I had lost my mother and father due to their bad choices in life and at the age of 74 so I knew I had no choice but to take control of my drinking, diet and exercise.

I was browsing the internet and came across Scott Herman of scotthermanfitness.com and watched a video of him on the subject of "Alcohol and Fitness" and a switch was flipped in my brain to get fit.

I later made it a goal not only to get fit but also to meet this 27 year old man who inspired me to make the choice to change the direction of my life. 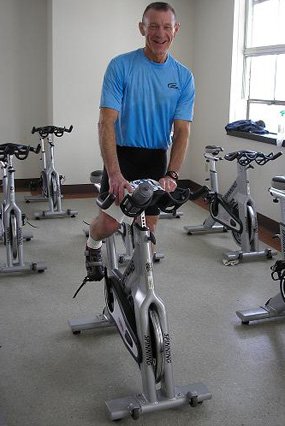 Again browsing the internet looking for more guidance, I stumbled onto the AthLEAN-X Training System designed by the former strength and conditioning coach for the New York Mets, Jeff Cavaliere. I decided to purchase his program and also signed up for his "Hall of Fame" personal coaching.

The rest is all history at this point now over a year later. The AX system is a 12 week long program of progressive and varied exercises combined with built in rest and conditioning days. The meal plans for the 12 weeks are also included so there was nothing left up to chance.

Ripped abs was the promise and that's exactly what my goal was. Having been a chubby kid and the kind term of husky for most of my school days I always envied the guys with athletic bodies and particularly guys with 6 pack abs.

Isn't that what drives most of us today? There were many discouraging days ahead but Jeff coached me through them and sure enough at the end of my 90 days I had visible abs.

I happened to enter the "Abs Blitz" contest that was offered on the AthLEAN-X Facebook fan page and during the last month of the year of 2010 hit my workouts even harder and added a workout for abs that was based on one that Taylor Lautner had used for his preparation for a movie.

I won 1st place for the best improvement in abs development in a 5 week period. The crazy thing is the pictures I submitted were taken only 2 weeks apart but I dieted hard and increased my cardio along with doubling up on my abs routines (morning and night).

The AthLEAN-X Training System is a great alternative to the usual "meathead" gym workout and is designed to get you lean and athletic, building some muscle along the way.

It is a training regimen that is suited for performance athletes who need to be strong, agile and flexible. There are additional workouts that can be combined with this program and as I did in the last weeks, combined an addition of an abs routine of my choice which I used in conjunction with entering a contest for the "best abs improvement" in a 5 week period, from roughly Thanksgiving to the New Year 2011.

Unlike some of the other workout programs available there is no DVD to follow and the workouts change each week. The commitment is for a 5 day exercise program with weekends for lite recreation.