Jesse played through a torn ACL to finish high school football and showed the toughness of a champion. See how this teen plans to build an IFBB physique!

I decided to transform because I loved to compete, be active, and live healthy. I played football in high school, so I already had size, but not enough. I admired how bodybuilders carried themselves and how hard they trained. I had every intention to become one after my senior year of football. Unfortunately, there were drawbacks.

I was hit after the whistle during the second game of my senior year and tore my ACL. Everyone told me I was done, but I kept thinking of people who said they wished they had played high school football during their senior year. So I developed a mindset to work through weeks of rehab, suit up, and be part of the team. After five weeks of rehabilitation, I felt good enough to suit up and stand on the sidelines to support the team.

Three games into districts, another senior linebacker broke his ankle in the fourth quarter. It was my first game back in pads, so I had to go in and play the rest of that game and finish the season. I didn't feel much pain, but I definitely wasn't 100 percent. I made the final tackle in our last game out of bounds and caught myself at an awkward angle that tore my biceps.

After my final football game, I went in for pre-operation and found out my knee had a torn ACL, meniscus, cartilage, and a fractured shin bone from playing on it the last few games of the season. I had surgery on my biceps on December 8, 2012, and waited until January 18, 2012, to have knee surgery because I couldn't operate crutches in a sling. After complete knee reconstruction, I went into physical therapy and was disgusted with the look of my body. After five months of bed rest and eating whatever I wanted, it was time to make my dreams come true and become a bodybuilder.

I got back in the gym on March 4, 2012, and started my road to become an IFBB pro. I'm not close to my goal yet, but every pro has to start somewhere. I feel more healthy and confident about life in general. I'm a beast in the gym and walk around knowing I'm in shape. No amount of money can buy that. When I go somewhere, people know I worked hard for my body.

My life is much busier now that I compete. I always go to my coach's studio at Dallas Beast Fitness to pose and train. The gym staff is an incredible group of people who know everything about fitness and competition. My coach, Matthew Cardwell, offers online coaching, nutrition, and posing. I wouldn't be where I am today without him. He's always open for business and will take you under his wing to transform you. I hope this article motivates at least one person and gives them the hope to succeed.

I have a big brother who's very into healthy living and is a powerlifter. He's a huge reason why I accomplished my goals. I decided to get bigger and gain size instead of cutting at the beginning, so I did a powerlifting stage (with the help and support of my brother). We spotted each other and lifted as heavy as possible for one-rep maxes for a solid year.

After I gained size (215 pounds), I quit lifting for strength to pursue my bodybuilding career. Four months after a year of powerlifting, I converted to bodybuilding workouts with high reps, moderate weights, and a faster pace to cut body fat. I also started my first hardcore diet after three months into my bodybuilding routine.

After a year and three months of intense training and moderate dieting, I started contest prep for Dallas Europa Teen bodybuilding. Because of my dieting inexperience, I lost 10 pounds in the first seven days and hardened up in the three weeks following.

I can honestly say from the bottom of my heart that I never wanted to quit bodybuilding or lifting weights. It's my passion. I gave up a lot that teens and younger adults wouldn't. This is my life and it means everything to me. I wouldn't leave the bodybuilding world. 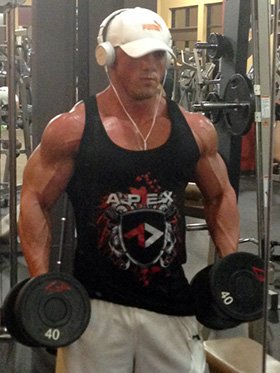 "Don't be intimidated by anyone or anything in the gym."

Overcoming my knee and biceps injuries was the most challenging. I've never been the type to let anyone or anything bring me down, but I had to let it run its course and heal so I could get back in the gym stronger than ever.

Show prep challenges more and more. I overcome it with support from people who provide kind words and notice how much my body transforms. I can't describe how thankful I am.

Thinking about that first place trophy makes shoving fish and greens down my throat a little bit easier.

I will do everything I can to be an IFBB pro. I will get my personal training certification after my upcoming show unless I find out I'll be competing again shortly after.

BodySpace members offer golden advice and encouraging words. I'm always open to listen. Gym rats are bound to run into problems and BodySpace is the place to find information.

The Store offers great products for a great price and the customer service is top notch. Bodybuilding.com is the best site on the Internet for fitness and health.