Unforeseen hurdles held Michelle's fitness dreams captive for more than 20 years. See how her relentless nature finally persevered and how her body responded!

I was an athletic teenager and always dreamed about being the fitness girl you saw in magazines. During college, I trained in the gym, but also smoked cigarettes, ate fast food, starved myself, and spent too much time at the local college pub. After college graduation in 1999, I got married and became the mother of two beautiful children, Seth and Alana.

Over the next several years, my marriage ended, and my beautiful nephew Reese Martin was diagnosed with cancer. He later passed away from the dreadful disease. I found myself repeating bad habits all over again; I smoked cigarettes, ate fast food, and drank alcohol.

I hadn't seen the inside of a gym in many years. I was at my lowest point emotionally and physically, 60 pounds heavier than I was in college, and suffering from depression. In January 2008, I remember sitting on my basement stairs crying and asking God to help me change my life. He did. God gave me courage to battle my personal demons and put people around me who are still by my side today.

I started a new job at the Mercer Day Report Center. I was quiet, wore long sweaters to hide my body, always pulled my hair back in a ponytail, and kept to myself. I overheard a few employees who talked about our director who allowed employees to exercise for free in his private training studio. Our director, Steve Collins, agreed to train me, so I joined the The Training Edge. 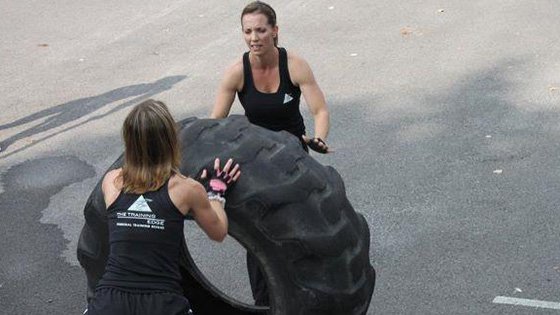 It was time to change my life. I set a goal to lose 40 pounds and quit smoking on January 25, 2008. I accomplished my weight loss goals by February 2009, but my mind kept traveling back to my younger days when I dreamed about being on stage as a fitness girl. So I set a goal to enter the Beverly International Northern Kentucky 2010 in the bikini division. I placed ninth, but left Kentucky smiling and determined to keep moving forward.

I followed Erin Stern and read everything I could about nutrition and training in Oxygen magazines and on Bodybuilding.com. I continued to train with the same girls and Steve. My training partners, especially Teresa Meadows, kept me focused. We're a long-standing group that helped each other for the past four years.

On New Year's Eve 2012, I was notified of my professional status within the Fitness Universe organization. I recently celebrated my fifth anniversary of being smoke-free. January 2013 proved to be a good month as I set new goals and celebrated my success.

The most challenging aspect of my transformation was adhering to the diet and lifestyle changes. I was convinced that I had to starve myself to lose weight. I was one of those girls who hated breakfast because it made me hungrier. Plus, I wanted to sleep longer instead of prepare food before I ran out the door for work.

To overcome my diet difficulties, I went to bed earlier so I could get up and prepare my breakfast, or I prepared breakfast the night before. I prepared enough dinner servings so I always had leftovers. 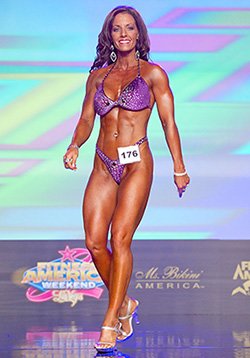 My future fitness plans are to achieve two goals by the end of June 2013. The first is to increase muscle mass in all areas and have optimum conditioning for my first pro figure competition, the Figure Universe 2013 in Miami, Florida.

Secondly, I hope to take my ACE personal training certification in June 2013.

My third goal is to compete in a dirty girl mud run with my fellow gym girls in September 2013.

For aspiring transformers, I must stress the importance of dreaming big. It's never too late to start and set reachable goals that lead up to your ultimate goal. Forgive yourself if you slip on the diet or get lazy with exercise; get back on track as soon as possible. Allow yourself a cheat meal at least once per week.

Knowledge is power, so research ways people reach their goals and stick with a plan that works for you. I wanted to be a non-smoker and a professional fitness athlete since my late teens. At age 42, I did it. Sometimes I catch myself smiling when I think about it.

I have been a BodySpace member since 2008. I order all of my supplements and tanning supplies from Bodybuilding.com. I made many friends who encouraged me and shared their success stories. I love to read articles posted by Jamie Eason, Erin Stern, Nicole Wilkins, and Ava Cowan.

Bodybuilding.com provided me with excellent, reliable information on nutrition, exercise, contest prep, posing, and tanning. I'm blessed and honored to be chosen by the Bodybuilding.com team as an "Over 40 Transformation."