Nobody gave him a chance. Not even his ex-girlfriend. So, Javier went on the offensive, lost 120 pounds, and shut mouths every step of the way. Now, he says thanks to the doubters!

For as long as I can remember, I have always been fat. Sad to say, I was the only fat one out of a family of ten. My brothers were all tough, built, and athletic while growing up; being in their shadows sucked.

Not to mention being poor. Growing up in rough neighborhoods while only having a mother and no father, playing outside wasn't an option, nor was proper nutrition. Heck, my mom always told me I was healthy. Little did I know, she was wrong.

School was super tough on me, gangsters bullied me, girls teased and used me, and I just hated being fat. Times got worse. We went homeless for two years. Do you know how tough it is for people to believe you're poor and fat? I couldn't buy regular things - I had to wear a sheet!

So I would literally cry to my saint to make me thin. I even considered at times doing drugs just to lose weight; it got bad. That was until I met a girl who finally made me feel good about myself.

As time progressed, I got a job and tried to love me for me. Well, that didn't work out. The relationship went sour, my heart was broken and I felt completely stupid. I had never loved a person so much, only to be cheated on in a Burger King playground.

Yeah, it sucked. This time I knew that I needed to just focus on me. Being fat wasn't attractive, and being nice only got me crushed; putting them together was my biggest weak spot. I had whatever money I had saved and decided that I was going to invest in me. 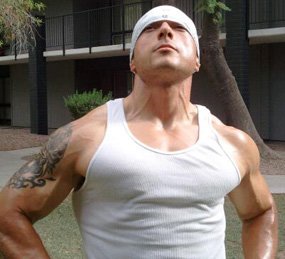 I took what money I had and took classes on nutrition. I figured food was probably what was screwing me up. Then my logic of muscles burning fat came into play.

I needed a gym membership, but couldn't afford it. I did what I could and learned online and from magazines about home workouts.

I started jogging (kind of), did push-ups, sit-ups, and chin-ups (not so much), but I was still too fat. When I was able to save enough money, I joined Pure Fitness.

Of course people were already placing bets to see how long it would take for me to fail, and some trainers can be jerks! And from what I've learned, most don't have a clue sometimes. But, I didn't have the money for one so I continued doing what I could. I ended up telling myself that as long as I was sweating and lifting, my muscles would do the rest.

A year later, and 120 pounds lost later, boy, did I laugh at that old trainer and the doctors who said it was too risky and not possible! I used to say I'd be happy at a certain weight, but once I reached it I asked myself, "Why stop here?" And I kept going. Plus, muscles were sexy in my eyes; I didn't want to be just thin.

As time flew by, people would continue praising me for coming so far, but my reply was that I'm just getting started. Soon after, a friend had told me I could do bodybuilding with the mindset I have. I figured, who knows … maybe. 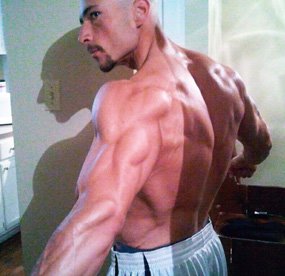 Well, maybe came. I met a man named Howie Fields who gave me great insight, tips and most of all knowledge about proper dieting. I found out he owned a company called Nobackfat Nutrition. I said, "Let's do it!"

I wanted to be someone more than just about losing weight, or just a simple transformation. I wanted to be a person who people could look up to.

I went from obese to a beast (which isn't too common)! I didn't have money, support from friends, and I didn't start in high school.

I wanted to assure people that so much can be accomplished. So I decided to shoot for a competition and dieting; cardio and lifting became my day.

Dieting isn't hard, it's being around those that don't - ugh, tough times! I ended up getting competition ready. However, the day of the show I found out my brother had passed away, so I didn't compete. I still eat clean and still have fun in the gym, but I hit buffets once in a while and can still eat like the big boys!

All I can say is I have earned a lot of respect. I took that negativity from people telling me, "You can't do it," "You will fail," "What is the point," "No one cares," and just showed them that not only could I do it, but I met and exceeded! Motivation is tough to find and tougher to keep.

You don't need money to better your health. You just have to want it that bad! There is no way to cheat your way to your goals; however, achieving them is very possible. Always remember that it starts with you, it's meant for you and it ends with you!

Whenever you feel stressed, sad, hurt, happy, energetic, or bored, the gym is perfect for you. You'll meet people like yourself, learn a lot about your body, and have fun. I've been there, and literally cried wanting what many take for granted.

I can say this though: being in better health as I get older, I know I am saving myself a lot of doctor visits and insuring my kids will have a daddy who can go out and play with them! If you're not beasting, you're just maintaining!

I owe a big thanks to Howie at Nobackfat Nutrition for his help and also to the girl who broke my heart. Without you, I would have never had the angry drive to show you what you lost. By the way, I'm not angry anymore, I feel cute now, lol.

I always say, "Let's get beasty" because I know the ones I see trying super hard in the gym, at sports, or just jogging are on a mission! I probably won't be a model or super sexy icon; I just hope to be a role model and look good too. A guy can dream!