Victoria barely survived the ups and downs, eating and not, exercising and not. Once she filled her life with positives, she underwent remarkable change. See how her life found balance!

It was a period in my life where I needed to allow myself the luxury of being selfish if only for 90 minutes per day! I have always been active in tennis, swimming, cheerleading, and boxing (I come from a family of boxers).

Aside from always being active I battled with a poor body image for the majority of my teenage years and into my 20s I struggled with anorexia.

At 5-foot-9 and 95 pounds I was positive that I was fat - I could see it. It was a feat in and of itself to gain weight, to get to what I thought was a healthy 115 pounds, at 115 I felt like I had beat my issue. Amazing how your mind can play tricks on you! This is why I say the scale is not my friend. My journey to a new body also meant embarking on a new way of thinking.

Fast forward to my first pregnancy. I decided I didn't want to get pregnant until I knew I was mentally well enough that I wouldn't panic when I saw the scale go up. Somehow that didn't work so well because little me gained 10 pounds in the first 6 months … not bad, and then BAM gained 65 pounds more by the time I delivered. (Scale definitely wasn't my friend then either!)

Somehow I thought it would just disappear since weight was never an issue for me, I learned quickly that is not how it works! I was back to my pre-pregnancy body in 11 months, just in time to get pregnant again! I had a small stroke at the same time and so all of my attention was focused on my health, pregnancy and watching my 1-year old, exercise fell to the back burner, actually the doctors suggested I didn't work out as a precaution.

I gained 65 pounds, lost it all, did a triathlon by the 10 month mark and found out I was pregnant again! I gained 60 pounds. Again, I Iost all the weight in about 9 months and someone had a little operation to ensure I wasn't pregnant again within a year!

I have NEVER been as depressed or hated myself and my body as I did when I had all the weight on. I didn't even eat junk food, I ate HUGE amounts of carbs and protein, I thought because I ate healthy I wouldn't gain like I did - I missed the portion control memo. So that was my struggle with weight gain in both ways.

In 2009 I was separated and divorced. I quickly learned that a bad divorce is like a trip to hell and back and it almost got the best of me. Until I met my now husband Joe, he revamped me so to speak.

By my 36th birthday, a year and a half into our relationship things hit an all-time low in my life (my post-divorce garbage) and I needed something that was not drama filled, didn't revolve around my kids, my man, my career, my ex, my mounting post-divorce issues, something that just revolved around me, without feeling guilty about it because I had lost me. 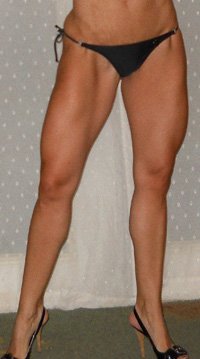 With Joe's help and encouragement I began the transformation challenge. He supported my change from the inside out. When I met him I had been working with a trainer for almost 8 months, I was 124 pounds, a year and a half later when I started the challenge I was 145 - wine was my evening companion.

As a trainer and the man who has to look at me daily I trusted his judgment, he put me on a strict meal plan, zero wine, and a ballbuster routine (I asked for NO mercy) and I gained some serious muscle. He worked out with me daily, pushed me at points when I thought I had given my all he insisted I had more, and he was right!

Learning that muscle weighed more than fat would be a difficult concept for me to embrace whether I knew it to be factually true or not. Somehow that was harder than the workouts. Thank God Joe was patient, I finally got it, I don't perseverate over the scale anymore!

I am super goal oriented, tenacious, LOVE a challenge, love to be pushed, don't like to have limits, independent, embrace the burn, the pain, you name it girl, and he gave it to me! I kept a food calendar on the island for the 84 days where I wrote down everything that I ate, I had the occasional cheat meal but I was so focused that it was very rare.

My self esteem began to resurface, my moods were so much better, I was positive, I felt like I had control over my life and myself again! The beautiful thing about that feeling is that nobody can take it from you; I think that although I see an outward transformation the biggest was on the inside.

The gym in essence is my therapy, I own a shirt that says shopping is my therapy … we can scratch that out now and put lifting weights! I'm excited to think that I am just getting started!