Most people use their age as an excuse to be lazy, but not Steve. This guy got better with age in every facet. He’s racking up bodybuilding awards in his mid-40s!

Name: Steve Alkana
Email: info@TroyGuy.com
Why I Got Started

Like many kids today, I grew up watching superhero shows like Superman, Spiderman and Batman, all of which had extraordinary physiques. Unlike most of the kids in my neighborhood, I was not brought up in a sports-oriented family.

Looking back, I was somewhat of an outcast when it came to sports. However, I got into fitness before the advent of most internet social media—a time when most fitness publications were in the form of books and magazines. The fitness magazines helped me realize that reaching an extraordinary physique, like the action heroes I admired as a kid, was within my reach.

After reading numerous books and articles and years of trial and error, I realized I didn't have to come from a sports background or be young to obtain an extraordinary physique. In 2000, at age 34, I entered the Body-For-Life EAS Physique Transformation Challenge. I believe there were nearly 400,000 entries. I didn't win that challenge, but I know I was close because my before and after photos were featured in my favorite fitness publication at the time, Muscle Media Magazine. I couldn't believe a guy like me, with no real sports background, was chosen to be in the magazine.

I was determined to make health and fitness a way of life. However, in 2005, I injured my cervical disk (the neck portion of my spine) and experienced the most excruciating pain of my life. Several doctors recommended surgery, but I avoided surgery like the plague and researched every method to rehab myself, including spinal decompression, epidurals, and physical therapy. I took three years off from weight training to recover and became out of shape. At age 44, I had enough. I was determined to get in the best shape of my life and prove it could be done.

I stumbled across BodySpace in a similar way I stumbled across the Body-For-Life Physique Transformation Challenge and Muscle Media Magazine. Bodybuilding.com and BodySpace was the modern day version and it opened up a whole new world of inspiration for me. In August 2010, I created a BodySpace account and posted a pictorial play-by-play of my transition for the next 12 months.

As I mentioned, at age 44, with significant experience behind me, I set out to get in the best shape of my life. After becoming a BodySpace member and reviewing other profiles, I noticed that guys with the physique I wanted were mainly young men's physique competitors. Just a few years ago, I would've never in a million years considered posting pictures of myself on the internet, let alone stepping onstage to compete with guys half my age in a bodybuilding contest. But that's precisely what I did.

After seeing the other BodySpace profiles, that was it for me. I decided that age was not going to hold me back, and in January 2012, I took the leap and entered my first NPC competition at age 46. I took all my knowledge about the process of transformation and put together a comprehensive written plan on both training and nutrition. I wrote down each day's training and prepared one week's meals in advance, weighing all my protein and carbs and measuring out every macronutrient. 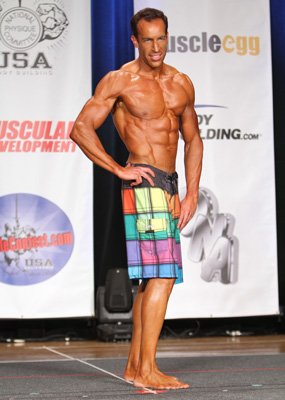 I'm not suggesting you have to weigh your foods, count calories, or compete, but for me, having a very tight career schedule, a wife, and a family, I needed to be highly organized and structured to make this work. The key is that I set a self-perpetuated goal for myself. Once I set this goal, I let everyone know about my decision to compete and there was no turning back.

Setting a goal in this manner worked well for me. It gave me purpose and a clear direction. I knew where I was and where I wanted to go. Success didn't come easy. I placed seventh in my first competition at the Ironman Natural at the LA Expo. I didn't have it nailed. At the Expo, I met several people who influenced my journey moving forward, namely Darren Conroy and Steve Cook at the Bodybuilding.com booth. I later met Craig Capurso online and Chris Cormier who gave me a training session at Gold's Gym Venice Beach. The most influential person, however, was a girl I met backstage who later became my competition prep coach.

Despite what I considered a failed competition, I wanted to turn my defeats into triumphs. And that's exactly what I did. Carla Maria Cadotte was the person who guided me through my diet leading to my next competition in May 2012 where I took home three trophies at the 2012 California State Championships. I'm setting my goals high again because I entered the 2013 BodySpace Spokesmodel Search.

Thank you for letting me share my story with you. I plan to continue making progress and sharing what I learned along the way. I hope I inspire and motivate you to take action and improve. 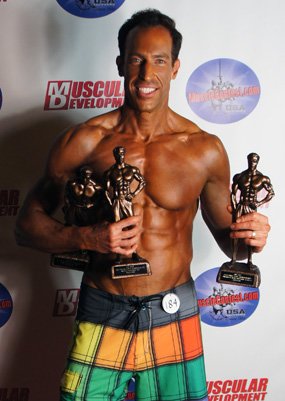 What Keeps Me Going/Accomplishments
Thank You