Body Transformation: Back In Action

James’ body was battered like a pier in a hurricane. A miraculous back surgery gave him his life back and he lost 100 pounds becoming a man of strength.

I'm 57-years old -- why am I doing this now? I should be playing golf and watching football and drinking beer, fer cryin' out loud!

For me, the answer is complex -- I've been weight training since I was 14, and competed precisely once, when I was 18. Then the U.S. Army got me. Over the course of three tumultuous years, I broke both tibia, screwed up my back three separate times, and left the Army with a disability rating for those injuries.

Now, initially, it wasn't bad, but years of weight training (though not competitive bodybuilding), medieval martial arts and aging took their toll. I really couldn't lift "heavy" any more, and never approached the stage again.

My back ached all the time, and I began having trouble with my balance. Chiropractors kept me going for a long time, but eventually, gravity won out. I fell in the garage in early 2002, and tore the left biceps off at the elbow. The surgery to correct this damaged the nerves to the right hand, and I still don't have full supination 10 years later.

Arthritis surgery in the left shoulder followed in 2003, and in 2004, my legs collapsed under while camping, and I fell 50 feet down a hill on my knees, tearing my right quad completely off the kneecap, and mangling the left. During the recovery from that injury, I was back in the gym on crutches, but the legs weren't healing right, even after the braces came off and I was off the crutches. 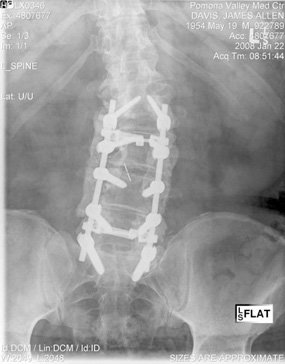 I had a "foot drop." I'd fling my right leg out forward to walk, but my left did all the propulsion. An EMG in March of 2005 showed that I was in the process of a serious deterioration of the nerve function in my lumbar spine. I was told there was nothing that could be done, and that I'd wind up in a wheelchair within a few years.

Through 2006, I kept looking for answers, while getting palliative treatments from cortisone shots to radio ablation to the nerves in the spine. Three more doctors agreed with the first.

Finally, in spring of 2007, I met Dr. Ali Mesiwala, a neurosurgeon in Pomona, California. San Francisco born and bred, he was an athlete himself and understood my emotional and physical pain.

After a few more tests, he looked at me and said "Yeah, we can fix this. When do you want to do it?"

I'll suppress any more gory details, but suffice to say that, on July 30, 2007, he fused my L5-S1, inserted three artificial discs, a foot-long titanium cage from S1 up to L2, and two nerve transplants, designed to bypass the impingements.

I went a little crazy without the pain slowing me down. Yeah, I'd lost some flexibility, and it's taken a LONG time to get strength and mass back in my legs, but it's happened. Here's how.

Then I fell in with Tom "Rage" Fuller and the crew from the Animal Barbell Club. Tom took over my training and nutrition, and the pace picked up. I dropped from 266-to-247 by Christmas, and 223 by the Arnold Classic in March 2009. I was transformed. My regular primary doctor didn't even recognize me when I went for my semi-annual exam in April.

In 14 weeks, with Tom's guidance, I put on 20 pounds of lean muscle, and about 5 pounds of fat. There were other guys that I thought looked more like "real" bodybuilders, but I had made the biggest overall transformation. I won, beating out 7 other guys, the oldest of whom was 14 years younger than me.

I began seriously to think of competition. I'd heard the horror stories of contest prep, because things had seriously changed since 1972 and my last competition, but I had a good trainer, and he got me through it. When I started prep in January of 2010, I was 254 pounds, about 19% body fat (which my doctor thought was fine - I certainly didn't) and ready to roll.

It wasn't easy. The restricted diet, the endless high-reps, the hours of cardio ... occasionally I'd get off the bike after the evening session, exhausted and dripping with sweat, and wonder "what the [bleep] am I doing all this for?"

Posing practice, tanning, custom posing trunks, and more practice ensued. I got down to 206 and 7% body fat.

On July 24th, 2010, I stepped onstage at the Los Angeles Bodybuilding Championships, three years to the week after my surgery. Then, I knew.

Now, don't get me wrong. I love training. I'm never more alive than dripping with sweat and gasping for breath with the iron in my hands. I'm not so fond of cardio, but there's even a sort of Zen satisfaction with that. I love the feeling as my muscles pump and burn and swell, and if I could never compete again, I'd still train.

That said, I'm looking forward to hitting the stage again twice in spring of 2012, and maybe once again this fall. The bodybuilding lifestyle has gotten me in better health than 99% of men my age, and I'll never leave it behind!

Nutrition is even more important than training. Without your nutrition being on point, no matter your goals, your results in the gym will be mediocre. There are many different diet plans. Everyone responds a little differently. At 57 3/4, my body is more sensitive to carbs, so I need to keep them lower than some of the younger guys.

Yes, bodybuilders need more protein than the "average" adult -- but if you're reading this, you don't want to be average, and average diets will do you no good. A good general guideline is between 1.5-2g of protein for each pound of lean body mass. Carbs will depend on how you react to carbs. I don't dare go over 250g a day even when I'm bulking -- others can have far more.

Fats, for me, have to be both clean and easy to digest. I used a lot of coconut oil and olive oil. I will even use plain butter during off-season, just because, occasionally, it's a nice change.

Whatever style you follow, consistency is key. If you're following a given program, you need to give it at least three months to track any real change. On average, it takes three weeks to make a habit of anything. Habits like this last a lifetime.

If you're just getting started, start easy. Give yourself time to learn to move your body. If you go too hard, too soon, you'll get too sore and scare yourself out of continuing.

Start slow -- let your body tell you what it's ready to do. Once you get used to training, it will tell you when it's time to push. Then crank it up! 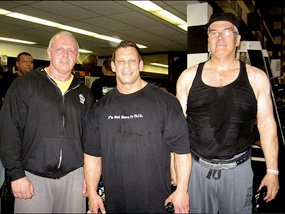 This is missed by a lot of folks, but critical to your progress. You need to do this for yourself -- not because your significant other wants you to, not because you feel guilty or want to look good for that reunion/wedding/party/vacation, not because your doctor tells you to. It needs to be your reason, and lodged in your heart.

Find your goal, if necessary. I'm a comics geek -- my first goal was to look good in a "Superman" costume at Comic-Con. It turned out though, once I DID look good enough, Comic-Con was the same weekend as my first contest as a Masters competitor. Then I discovered the joy of competing, and I haven't looked back.

Your family and friends will not "get it." You'll be encouraged to "have just a bite," "relax a little," or "don't get fanatical about this" (I split up with a girlfriend over that one). This is YOUR life. You need to do what's best for you -- whatever training you're in to. You don't have to be a fanatic; you just need to find what works for you.

I love my time in the gym -- I'm never more alive than when I'm pushing myself hard in the gym. I love the feeling I get when my heart's pounding, the sweat's dripping, and my muscles are burning.

Maybe I'm weird for my age, but at a time when most guys lift nothing heavier than trash bags, I'm stronger than ever. What do YOU want?

Tom "Rage" Fuller and the Animal Barbell Club - without them, I'd never have gotten to the competition stage 3 years to the week after my back surgery.

To John DeFendis, for additional guidance and support.

To Steve (SteveP78) Poynter for keeping me on-track, away from "ego lifting," and shepherding my contest prep. His Poynter's Iron Pit is the second best thing about having moved to Kentucky.

To Dr. Ali Mesiwala, who repaired my spine so I COULD do all of this, and go from 313 lbs. before the back surgery to 206 for my first contest.

... and to all the friends who've put up with this obsession, from my roommates after the back surgery to my fiancée over the past 18 months. Your patience has been saintly.

*James lost an inch off his height due to the back surgery.