Billy Blanks Jr. Dances His Way To The Top Of Fitness

Risk is second nature in business and fitness. Failure is commonplace, but so is the spirit of entrepreneurial ascension. Billy Blanks failed so he could succeed.

Success stories in the fitness industry vary worldwide. At the heart of every story is an inspirational struggle that you can apply to your own life and future success. The story of Billy Blanks, Jr. serves not just as a fitness success story but as a business parable, as well.

Before being featured on the show Shark Tank, Blanks was a man who worked on his own to finance a company to the point that he and his family became homeless. Now he is well on his way to the top. His "Dance It Out" programs show people around the globe that they can lose weight and hone their dancing skills on the same floor. Billy will tell you that his journey was challenging, but rewarding.

Q
What inspired you to make your career in the fitness industry?

When I was younger I used to teach karate aerobics for my father, and I remember a distinctive moment where I saw a large group of participants working out in misery. Every time I would go up to teach, I would work my best at giving them a workout while trying to get them to smile. It then became my mission to create workouts that were effective and fun.

You and your wife invested so much into your career on your own that you ended up homeless. Many would've given up. Why did you keep going?

Several things kept us going. For me, as a man, it was my wife and my son who were my ultimate driving force. It was spirit-breaking to be in that position, but we knew if we didn't fight to change it, things would get worse. Every day we were teaching our class and our students didn't know [about our struggle], because we believed the focus should be about helping them change their lives. When we came through it, we told our students our story and told them that their belief in us and our program helped us get through.

At that time all of our students' stories started coming out. It was the best lesson. Every day, people are doing their best to get through and put on that "I'm OK face" while life is happening, good and bad. Kindness is the most important thing. Your smile or a kind word can be the fuel that helps someone get through a hard time. Those moments let us know that our mission went beyond just a workout. We couldn't stop! 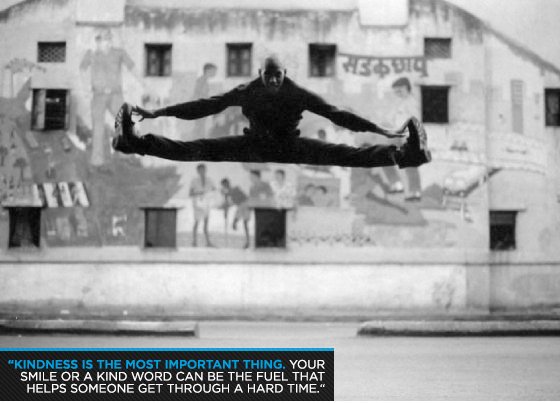 What led you to Shark Tank?

The fitness industry is treacherous. The giant corporate clubs would come to us and tell us that we had such an amazing program and would have us teach there for some time to sold-out rooms. Then they would ask us to train their teachers. They would study our program and tell us they wanted to take us national. After some time, they wouldn't pick up the phone. We would then get an email from that same corporate gym saying come and try our new workout. It would be our program with a different name. They stole the whole thing and didn't have to pay us anything.

We were at our final straw. We had invested all we could and kept getting doors slammed in our faces just like that.

So we were watching Shark Tank and I turned off the TV and told my wife and co-creator of our program, "We have to do this." We knew that whether we did or didn't get a deal, we were going to learn a lot from the Sharks. So we auditioned for Shark Tank like thousands of hopefuls and made it.

You turned down the Sharks' offer at first. Why?

People don't see that the Q&A is much longer than the edit you see on TV. My Q&A was close to 45 minutes! I explained to the Sharks that the fitness industry is treacherous. Daymond kept saying, "I will offer you this deal contingent on if Zumba will work with you." We know that we were Zumba's biggest competitor and that they were going to say no. We love their program and they respect our program, but we knew it would be viewed like asking McDonald's and Burger King to merge.

We didn't want to lose the deal with Mark and Daymond because of that, and we hoped that when they heard the word "no," they would still work with us. Also, so many people try to create knock-offs to hang on Zumba's coattails, and that is not us. We worked hard to create a real and unique program that is actually different than Zumba, so that is why I ended up first saying, "No."

So what happened after you reconsidered and ultimately accepted the offer?

It happened just as we had thought. Zumba said absolutely not. Our program, Dance It Out (DIO), is their biggest competitor. However, Daymond and Mark decided to move forward with us anyway. It changed our lives instantly!

What plans do you have for yourself and your company?

My wife Sharon and I have been dubbed as America's First Family of Fitness and Dr. Oz calls us America's Fat Fighting Couple! Right now we have 500 teachers in the United States, 500 in Japan, 100 in Taiwan, and we are growing rapidly. Our goals are to have quality teachers in every country, and we want to open our own location in Los Angeles for our vast following. We want to continue making DVDs and start working with schools to fight childhood obesity. We launch our U.S. school tour 2013-2014.

Do you have any advice for aspiring entrepreneurs or people looking to reach their goals in fitness?

If you truly believe in what you are doing, do not accept "no" for an answer! Even when it seems like it's the end, at your darkest hour, if you still have the faith to press forward with a positive attitude, you will be rewarded ... I promise!

Meet The Blanks
Dance It Out Fitness