Understanding Figure Judging: Find Out Why You Place Low & How To Fix It!

Over time judges have gravitated toward a longer-waisted, longer-proportioned type of body for figure competitions. Get the inside story on judging and placements.

If you are wondering on what basis figure is judged, given that there aren't the same kind of more-or-less objective criteria to go by that you find in bodybuilding, you are out of luck - because nobody can really tell you.

What Are Judges Looking For?

Over time, the judges have gravitated toward a longer-waisted, longer-proportioned type of body than you find in fitness or bodybuilding, where the more compact physiques tend to win. But that is more of a tradition than a set of criteria.

But given this tradition, a general rule is that competitors who have the same type of structure as Davana Medina, Jenny Lynn, Amber Littlejohn and Mary Elizabeth Lado will tend to have an advantage. But that's only in general. Many of the women who place well finished way down in their last contest and will finish out of the top ten in the next one they enter.

But what confuses competitors is not so much that placings can vary so widely from show to show but the amazing degree of consistency you tend to see in the scorecards in any given contest. That is where the quote at the beginning of this article comes from.

A figure competitor asked me if I thought there was some kind of collusion among the judges, some meeting in which they received instructions on how to vote. How else, she thought, could a group of nine or eleven judges all agree on who should finish 11th, 12th or whatever?

Anyone who examines figure scorecards and sees that this type of thing does seem to happen fairly often. But what causes this is not some kind of conspiracy among the judges in which the placings are determined ahead of time. Instead, the process that creates this kind of result actually takes place during the contest and is perfectly obvious to everyone watching if they know what to look for.

Results Are Obvious If You Know What To Look For.

The key is the control, exercised by the head judge over the call-outs. While prejudging call-outs in IFBB bodybuilding have always involved a more mixed quality of competitors in any given group, the NPC style is more specific: the first five called out are the top five, the next group defines who will finish 6th through 10th, then the next group of five and so on.

In bodybuilding, this is a fairly effective and efficient process. Because there is a tradition of specific standards in bodybuilding, judges might disagree as to whether a competitor should be 2nd or 3rd, but not whether they should be 2nd or 12th. There simply shouldn't be that much disagreement among competent judges in the vast majority of cases.

But judges in figure can't rely simply on their own experience or expertise. There just aren't any specific standards to go by. The practice in fitness, which is also applied in figure, is to give high placings to women who have done well in past contests or who look like those who have placed well in the past.

But there has always been a much greater degree of "sameness" in fitness bodies than in figure, because the fitness women also had to be gymnasts (for the most part) and excelling in gymnastic moves requires a small, lean, compact body.

But because of the misconception that figure is somehow "easier," a lot of women from both fitness and bodybuilding have decided to switch categories.

So what's a judge to do? How can you arrive at a series of placings that conforms to the "consistency? Required by both the NPC and the IFBB?So the figure line-up - especially at the pro level where there are no height categories - usually contains a wide variety of different body types. Tall, long-bodied competitors stand next to former gymnasts and bodybuilders as well as sexy "bikini models."

The answer is that you follow the lead of the head judge. Here is a scenario that takes place more often than you might think: The head judge calls out five competitors. Whether that would be your top five or whether you think all the competitors in the group deserve to be there doesn't matter. The judges have now been told who the top five are supposed to be. Disagree at your peril. 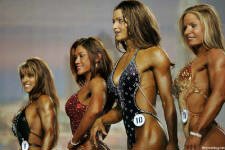 As The Head Judge Moves Competitors
Final Placings Are Being Decided.

The same thing happens with the next five and then five more until all the competitors have been prejudged. All the judges have to do is follow the lead of the head judge and write down the scores accordingly.

However, when this system is used there aren't really 9 or 11 judges scoring the contest - there is only one.Of course, when you are dealing with contests across the country at both the amateur and professional levels, there are a variety of different head judges and not all of them have things so carefully organized.

But until the NPC and IFBB decide to define what figure actually is and can describe what kind of physiques they are looking for in some more specific way, one system would seem to be as good as another.

Nonetheless, you do end up with some bizarre placings when the head judge has overlooked a competitor of great quality (most often because she simply isn't well known enough yet) and you see her standing in the "tail end" group that contains women who, however aesthetic and athletic looking, are obviously not suited to success in figure competition.

Seeing a swan standing there among the ducks you'd think the judges would be embarrassed. But physique judges seem to have an endless capacity for rationalization which protects them from admitting that mistakes have been made.

Bill Dobbins is a photographer, video director and writer based in Los Angeles, California. Bill is best known for his photographs of female bodybuilders, but he has had a varied career outside of and in addition to this unusual speciality.