Ask The Super Strong Guy: How Can I Get Strong And Big?

Pro powerlifter Mark Bell answers your questions about picking very heavy objects up off the floor and rack.

What's up, strong dude? I'm trying to build strength and muscle mass. How can I do both at the same time?

(And if I my editor changes that phrase to lower-case, just because it's "correct," I'm going head straight to Idaho and knock his ass around the office for a while.)

Many legendary bodybuilders used powerlifting and or powerlifting movements to build championship physiques. Arnold did tons of bench presses and squats. Franco Columbu did heavy deadlifts, and no one packed more muscle mass onto such a small frame.

Today, you have Johnnie Jackson, Ben White, and Super Training's own Stan "Rhino" Efferding. Rhino is a ball of muscle, head to toe; he looks like he's wearing football pads under his T-shirt, he's so jacked. The dude has muscles in his feet, head, even coming out of his ears.

Is that even possible? Take a good look at Rhino and you'll see what I'm talking about. Stan is the ultimate mix of size and strength--a pro bodybuilder who just happens to be the strongest raw 275-pound lifter to ever stomp across the face of Planet Earth.

When Stan came to ST, I weighed 330 pounds. He helped me drop down to 285. I dropped a weight class--and became stronger. My best total at 308 is 2,508, and my best total at 275 is 2,601. What I dropped was body fat, and people think I look bigger now. This was all done with a good old-fashioned bodybuilding diet (just with a little more fat) and powerlifting.

Here's how you too can become not only stronger but also bigger:

Pick a main barbell movement for the day

For legs it would be squat or a deadlift variation. For upper body, your main movement would be bench press variations (flat, incline, or floor press) Warm up and progress to a 2-to-3-rep max. Make sure your form doesn't turn to total shit. Make sure you don't pile on a lot of weight too early. Making small jumps in weight ensures quality lifting.

This basically means that you're not doing full-bore maxes. You're looking more for a level 8 or 9 out of 10 on the ST pain meter.

When you complete an exercise by reaching a heavy set of 1 to 3 reps, drop the weight 50 to 60 pounds, and do 3 sets of 6 to 8 reps on that exact same exercise.

light, medium, and then heavy for 3 sets of 10. Or do 3 sets of 10 with the same weight on exercises that will help increase strength on the main event movement you picked, while also increasing muscle mass.

After the main exercise is over, superset opposing muscle groups

If your "main event" movement was bench press, move into dumbbell bench press and superset it with bent-over dumbbell rows, followed by dumbbell curls and lying dumbbell triceps extensions. 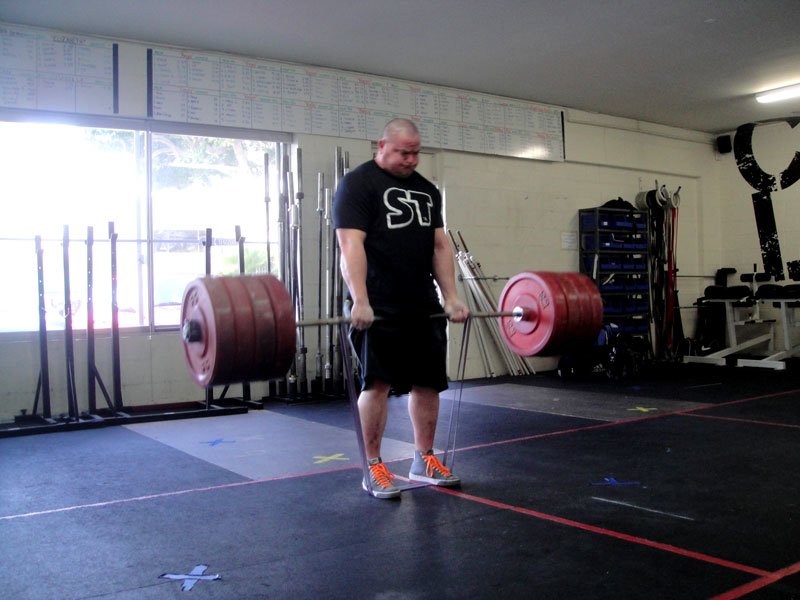 "Bands are for sissies. Unless you're deadlifting more than my car weighs."

Once you've employed those mass-and-strength strategies, there are there a few more simple things to consider, Cupcake:

What the hell did this kid eat? Well, he invested in some protein powder, but after that, he didn't have much loot, being a college kid. Jordan ate a lot around his training. He was often seen eating a peanut butter-and-jelly sandwich or a Snickers bar before he was finished with his workout. Jordan ate a lot of protein and complex carbs.

However, I do think he also pounded down some McDonalds here and there, because as powerlifters, gaining some body fat isn't a huge deal. Basically, if you want to be huge, jacked, and strong then you need to not only lift big--you need to eat big.