Amateur Bodybuilder Of The Week: Tyler Is A Bodybuilding Beast!

Tyler saw a photo of Ronnie Coleman and became fixated with bodybuilding. See how this titan built muscle with authority and set the stage for his pro arrival!

I've had a rough life that caused me lots of mental anguish. As a result, I was extremely angry and was a bad child and young adult. I had no way to release my anger in a positive way. I joined the high school football team as a freshman and loved weight training.

My body completely changed after lifting. I went from being small and skinny to having good muscle tone. I was able to release my frustration during training, which felt great. When football ended, I went to my dad's basement, used his weights and saw an old muscle magazine with a photo of Ronnie Coleman. I instantly knew that bodybuilding was my calling.

I quit high school sports and trained full-time as a high school sophomore. I studied every article on training, nutrition, and supplementation that could promote my success. I chose to compete in the Gary Udits NPC Pittsburgh Championships as a high school junior, which is one of the biggest amateur shows on the east coast. I dieted and trained alone for 16 weeks. 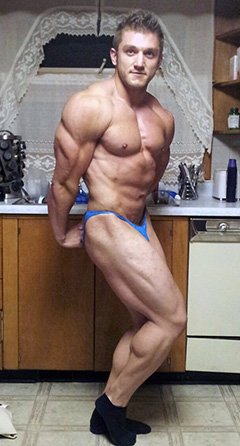 "I studied every article on training, nutrition, and supplementation that could promote my success."

I was so nervous and shaky walking out on stage that I couldn't make eye contact with the judges. I later learned that I would've won my class if I looked at them. After the show, I knew I needed help with nutrition, so I contacted IFBB pro Fakhri Mubarak. We began working together and I competed again 16 weeks later at the Jackson Classic and won my class and took sixth in men's open.

During my first offseason, I bulked too much. I was 270 pounds when I began my prep and had to do two hours per day on the stairmaster with very low carbs to prepare for my third show, the Gary Udits Elite Physique. I was in my best shape yet but got into a car accident in the rain on my way to the show, which washed my tan off. I made it to the show just in time to run on stage, win the collegiate class, and take fifth in men's open.

Eight weeks later, I did the Jackson Classic again and took second in men's open and earned a national qualification. During my next off season, I stayed tighter and had a great prep. I was in the best condition to date thanks to Fakhri. Although I placed sixteenth, it felt good to be the youngest bodybuilding competitor there.

I entered the Kentucky Muscle competition 12 weeks later and learned that my body doesn't handle long-term dieting and hardcore training well. I felt drained and exhausted and took sixth place. My next two shows are at the Collegiate Nationals and North Americans again. 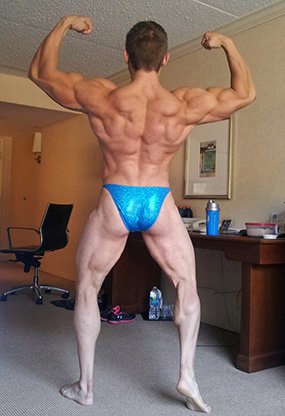 "I used all the negativity in my life as motivation."

I love competitiveness and battling it out on stage. I control the outcome of how I look. It takes everything I have. I will be the best one day.

Seeing Ronnie Coleman's physique inspired me to start my bodybuilding journey. His raw muscularity and complete physique was insane. I wanted that for myself.

I used all the negativity in my life as motivation. I was constantly put down by others and was told that I would fail. I used that motivation to push myself and prove them wrong.

I'm currently in my offseason and am working to grow and get to the top of the 225-pound weight class. My next show is in July at the NPC Collegiate Nationals. From there, I'm going to do the IFBB North Americans. 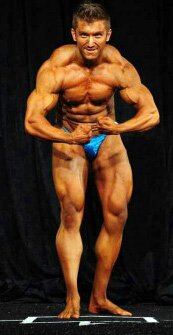 Consistency is the key to success in bodybuilding. There are no excuses. You either want it or you don't!

I want a physique like Flex Lewis so bad. He trains his ass off, has a great personality, takes care of his fans, and is an all-around cool guy.

I used Bodybuilding.com and created a BodySpace to reach out to competitors and learn as much as possible. I love the articles and enjoy seeing others achieve their goals. I also use the store for great product deals. The Jay Cutler Living Large Trainer is awesome.