What Is The Best Golf Training Routine?

What is the best golf training routine? Physical and mental conditioning is extremely important especially on the back nine. Here is some information and exercises that are helpful in golf.

TOPIC: What Is The Best Golf Training Routine?

A game of golf requires physical and mental conditioning. Regardless of what some people may think, golf is a physically demanding sport.

What is the best golf training routine? Be specific.

What type of conditioning is most important for a golfer; weight training, or aerobic? Why?

What is the most important set of muscles to a golfer?

What are some realistic goals that a golfer can set for themselves?

1st Place - HBY18202
What Is the Best Golf Training Routine?

Golf is just like every other sport. There are many training routines one can take in order to improve themselves in the sport. It's up to the athlete to decide which one of the routines they feel that would best suit their needs for what their trying to gain.

The game of golf isn't about doing things right, it's a matter of eliminating how many things you do wrong.

Anyone who has played golf will tell you there are a million components to a golf swing. Usually, one who goes out there and just tries to swing doesn't see much success. Chuck Stark (Writer for The Sun Link) said it best when he said,

"Grip it and rip it. It works for John Daly.
It never worked for me.
All I did was wear out golf gloves."

If you've ever swung a golf club, you soon realize it's not as easy as it looks. You can't just take a swing and expect a straight consistent shot every time. To become a better golfer, the athlete has to use correct practice to correct imperfections in his/her swing.

A game of golf requires physical and mental conditioning. Regardless of what some people may think, golf is a physically demanding sport.

Certainly, most people who say golf isn't a physically demanding sport haven't played it much. To those who think this, I challenge them to walk 18 holes on a summer day, and see if they aren't physically tired by the last few holes.

Body weight alone is a lot, but when adding in the weight of the clubs it becomes a lot harder. Unless someone just has amazing endurance, I see this taking its toll on anyone.

I think that once one has started to treat golf as a sport, and all the training and practice that goes into it, then golf will see the respect it deserves. If the non-believer saw the amount of time that Vijay and other pros put into the sport, I think it would be much easier to compare golf along the lines of baseball and basketball. 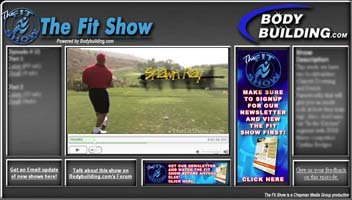 Routine:
What is the best golf training routine? Be specific.

I think that to be in the best shape for the sport of golf, one must be physically and mentally strong as well as have great endurance. With weightlifting being a massive part of every sport these days, even Tiger is said to bench more than 300 pounds.

So after Golf Digest did a report on Tiger's training routine, even non-golf fans became interested. If anyone remembers, Woods went from a small 155 lb 21-year old into a ripped 180 lb 28-year old. So then everyone started asking, what does Woods do in the weight room?

Well, Tiger's personal favorite exercise requires light cardio and heavy lifting. He lifts for hours upon end - for three to four hours at a time. During his days of strength training, Woods just follows core workouts (Bench, Squat, etc...) while doing 80% of his max weight.

Here is where Woods changes from your normal day lifter. He tries to relate every lift to a golf swing. Whether it is stretching, rope work, or lifting, he tries to incorporate his sport into lifting, which obviously works well for him.

Lastly, Tiger trains on his grip and stance using weighted exercises including dumbbells and barbells. When training himself with core workouts, he builds up muscles that help to stabilize the body, which help him control the factors that handle his swing such as his arms and torso.

As an example, Tiger may do a lift while his knees are placed on a ball in order to keep balance, and improve stability in his stance. So in a nutshell, the bread and butter to Tiger's routine is repetition, and relating the lifts to the sports he plays.

Conditioning:
What type of conditioning is most important for a golfer; weight training, or aerobic? Why?

This question could go either way, but if I had to make a decision, it would have to be aerobic. Just as in boxing or football, somebody can do very well in the start of a game or match, but how they perform throughout the event determines the winner.

With golf, more so than most sports, consistency is what allows one to win. How can one be consistent when he/she swung and drove the ball 400 yards twice, and are tired by the third hole? With tournament matches (even in High School) requiring the athletes to walk all 18 holes, conditioning begins to play a huge role in the outcome of the match.

The majority of golf matches are won within one or two strokes of one another, exhaustion can be a monstrous factor on the back nine. Although weight training and aerobics both play their own huge roles in golf, I think that aerobic is hands down more important.

There are so many essential muscles to the sport of golf. The wrist and forearms place the highest priority out of all of the muscles. The wrists control the drives, the chips, the putts and basically every shot in golf, the strength that powers them is very important. There are many workouts that strengthen the wrist and forearms, but I've compiled my top three favorites that I feel would contribute to a better golf swing.

This involves doing your basic preacher curl, but doing it backwards so that instead of isolating the bicep, you concentrate upon the forearms to lift the weight.

These curls involve using a bar with a hole through the center, with a string running through the hole attached to a weight on the other end. When the bar is rotated, the string wraps around the bar, causing the weight to elevate, and the wrist to power the lift. One can also do this lift with just using a straight bar while having the forearms resting upon a flat surface.

This is just simply standing with a barbell in each hand, and curling the wrist in sets so that the wrist has to support the weight of the barbell.

Goals:
What are some realistic goals that a golfer can set for themselves?

Let's face it. Everyone who enters the sport of golf aims for par. It's the average in which all perspectives in golf are set. Once you break par on the course, you've accomplished a monumental goal. The problem is actually getting there, because it sounds a lot easier than it actually is.

Short steps are the essential key used to make gains that would normally seem less important. As with any sport, practice makes perfect. The more consistent your swing becomes, the quicker you start shaving strokes off your course total.

Review Of Other Articles
Or "Why Wasn't Mine Picked?"

Comments: Three commas in opening sentence weakened work that was the beginning of a strong opening. Enough content for a decent "read" is needed.

Three or four well structured paragraphs to answer each point of outline might be a good start. Structure paragraphs in an outline to answer the specific question. The paragraphs can introduce, support and re-enforce each point. Overall acceptable grammar and style seen here show promise.

Comments: Writing an article is like telling a story. A good storyteller will establish a cadence or flow that is appropriate to the circumstance.

When reading, the way paragraphs are laid out has a lot to do with this "flow". A paragraph that contains two or three points can have a "jumbling" or "scattering" effect on the readers focus. Let each point or idea have its own paragraph.