A Push-up For Every Occasion: 8 Variations For Strength, Power, Flexibility And More!

If you only know a couple of push-up varieties and can keep repping them forever, you need a new challenge. Al Kavadlo has one—and then seven more!

I've often heralded the push-up as my all-around favorite exercise: it requires no equipment, it's adaptable to any fitness level, and it can be varied in an infinite number of ways to suit a vast array of goals. It's such a simple move, but that's where its beauty lies.

There are so many push-up modifications and progressions that no matter your needs, you can—and should—be incorporating at least one into your routine. Whether for joint health, improved mobility, or explosive power, everyone can utilize some form of the push-up to help them improve. I've got eight variations that you may not have considered before. Try them on for size and get ready to push your limits!

When standard push-ups start getting easy for you, the close push-up is a fantastic alternative. By decreasing the distance between your hands, you create less favorable leverage, thereby adding a new challenge—as well as multiplying the muscle-building potential of the classic version. The closer your hands get to each other, the more difficult the move becomes.

When performing close push-ups, make sure to keep your elbows tight by your sides, rather than flaring them out. This will protect your joints and help you get the most from your triceps on every rep. Aim to work up to 30 strict reps in one set. Your arms will thank you for it.

This variant is an excellent way to add a flexibility component to the standard push-up. Hindu push-ups also increase your range of motion and require additional shoulder recruitment, making them a win-win. To perform a Hindu push-up, begin in a yoga-style downward dog pose with your elbows locked, hips in the air, and chest pressed toward your thighs. You may feel a deep stretch in your calves, hamstrings, hips and back—pretty much anywhere on the entire back of your body is fair game. 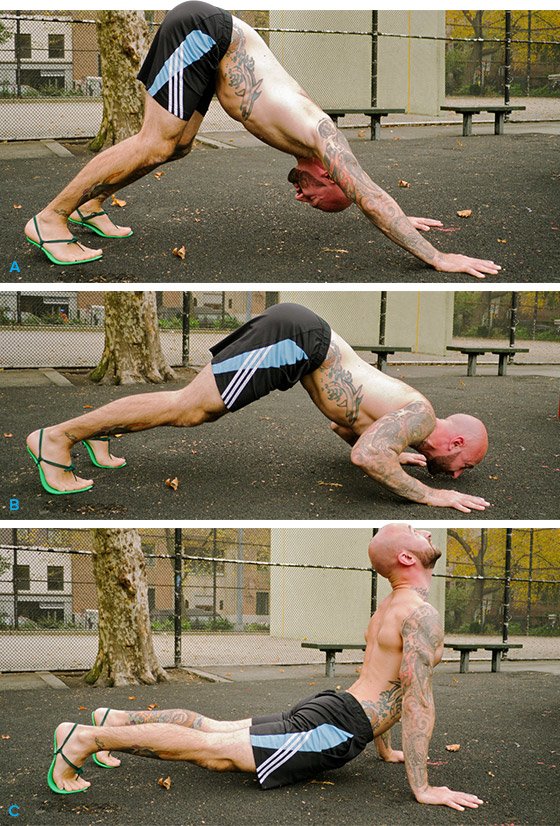 
From here, lower your head toward the ground, then swoop your chest up, dropping your hips as you look up toward the sky, providing a stretch for the entire front of your body. Pause briefly before pressing your hips back up to begin the next rep. While Hindu push-ups may pose a mobility challenge at first, aim to gradually increase your range of motion over time. 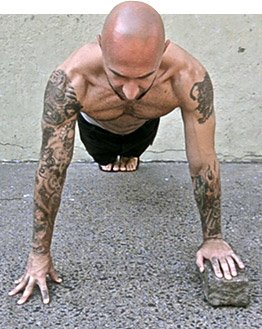 Raising yourself up on your fingers adds a whole new element to your push-up training. In addition to involving a slew of often-neglected muscles, doing push-ups on your fingertips can also allow you to increase your range of motion by creating space for you to go lower.

If you don't have the strength to do fingertip push-ups yet, try placing one hand flat on a slightly elevated object while the opposite hand is supported on the fingertips. Remember to switch hands on alternating sets. Soft surfaces like rubber or grass can be more forgiving when getting started. Eventually, you can condition yourself to practicing on harder surfaces.

It's worth noting that the term "fingertip push-up" is a bit of a misnomer. For this variation, you're not actually all the way on the tips of your fingers, but rather on the pads of them with your fingers spread and the tips slightly bent back. Some people's digits will wind up bending back more than others. This is not a huge deal. Just don't allow any part of your palm to touch the ground if you want it to be legit.

The claw push-up is an advanced variant on the fingertip push-up that has you all the way up on the tips of your fingers with your hands resembling a claw-like position. Though some purists call this the "true fingertip push-up", the one mentioned above is still the industry standard. Semantics aside, this variant can be a useful tool for advanced grip trainees. Again, feel free to start with a soft surface. 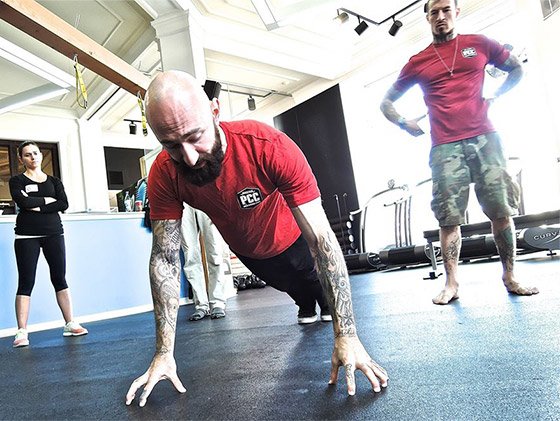 Though still a fringe exercise to the mainstream, wrist push-ups (aka back of the hand push-ups) have long been used by martial artists, gymnasts and other athletes looking to take their body to the limit of its physical potential. Like the previous two exercises, I recommend training on a soft surface at first, as the skin on the backs of your hands will likely feel sensitive when starting out. The most you'll probably want to work on this move in the beginning is once or twice per week. 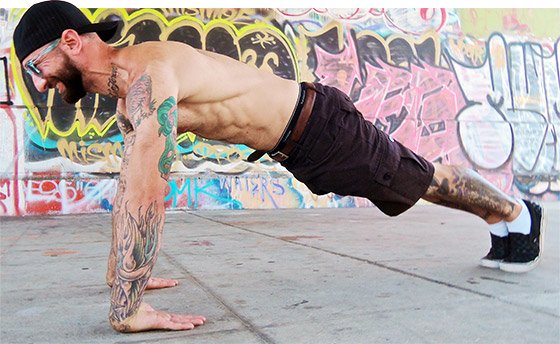 After a little while, your wrists will adapt and become stronger. Then you can add more volume as you see fit. You can also ease into full wrist push-ups by practicing with one hand on its palm and the other on its back, then switching sides.

If you're looking for a push-up that will give you a balance and stability challenge, look no further than the iguana push-up. The grip work involved in this variant is also a nice complement to the fingertip and wrist work in the previous variations. 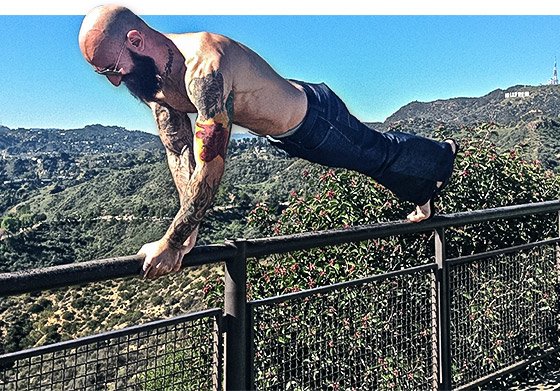 To practice iguana push-ups, you'll need a rail or straight bar to position under your body (a single bar from a pair of parallel bars can work nicely). Grip the bar tightly with both hands while you cross one leg over the other and perform your push-ups from this position. You'll need to brace your core and go slowly in order to avoid tipping over. See if you can build to 10 in a row!

Few upper-body plyometric exercises can compete with the clap push-up for improving explosive power. As the name implies, this exercise is performed by pushing your entire torso off the ground at the top of the normal push-up ROM, then quickly lifting both hands and clapping in midair before catching yourself and lowering into the next rep. 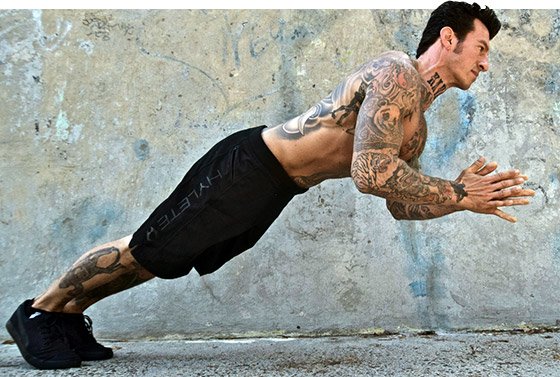 You can start out practicing these with your feet wide for added leverage, eventually progressing to performing them with your feet together. Again, start with soft surfaces!

The ultimate in explosive calisthenics! The superman involves propelling your entire body away from the ground at the top of your push-up, with your arms reaching overhead like you're flying. This is the king of plyo push-ups. The superman builds monstrous power!

Before you embark toward this move, make sure you can do at least 10 clap push-ups. Then start working on half-supermans, where your feet stay on the floor, as an intermediate step. Once you can perform five consecutive half-supermans, you can start trying to lift your feet off the floor and go for the full superman.

It's best to have a solid foundation in the basics before proceeding to harder variations. If you are new to push-ups, try to avoid the temptation to rush ahead. Aim for 30 standard push-ups as your baseline, then proceed to work your way through this list. As you build up to harder moves, the amount of reps necessary to proceed will drop; it shouldn't take more than about five supermans at a time to leave you needing a break. Harder moves can tax the body with far fewer reps than the basics.

When it comes to push-up variations, this is all still just the tip of the iceberg. There is endless territory to be explored—don't be afraid to push yourself! The sky is truly the limit!