7 Exercises That May Save Your Life - Or Someone Else's

Training can help you live longer, but these explosive and powerful moves can save your life in an instant.

Aesthetics are great, but not everyone trains strictly for show. I train for functional strength, focusing on strongman and powerlifting. I like to win, but sometimes the stakes for developing such raw strength are higher than competitive success. Occasionally your job depends on it—and the lives of others may depend on how well you perform that job.

I've seen many bombshell physiques athletes who were all 'show' and no 'go.' They trained to look dead sexy, and that's what they got, but not much else. That's well and good until trouble or even danger strikes, at which point the split separating your upper and lower pec or your bulging biceps vein won't be able to save you.

For that reason, everyone should do athletic and functional movements with a basis in strength. As Mark Rippetoe says: "Strong people are harder to kill than weak people, and more useful in general." In that spirit, I present you with seven exercises that could save your life.

You're cycling down the boardwalk on patrol with your partner. Oh no! A distracted driver misses the curve in the road because they're on their cell phone. They jump the curb and run over your partner before hitting a concrete barrier! The car is disabled, and every second counts while help is several minutes away. It looks like you'll have to pick up the car so the driver can assist pulling out your partner. 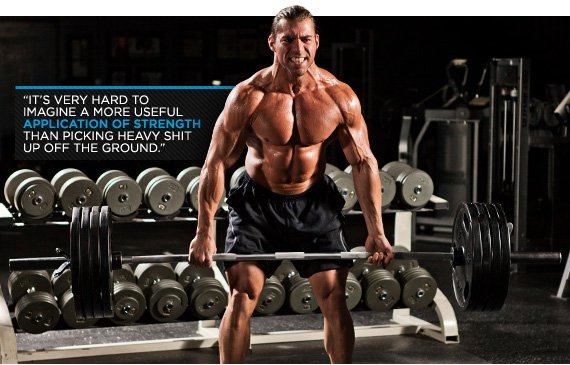 What's needed here is a trained ability to lift a heavy weight from the ground. "The deadlift is more functional in that it's very hard to imagine a more useful application of strength than picking heavy shit up off the ground," Rippetoe says. Sorry, Mark. That's the second quote I've stolen from you and we are just getting started. 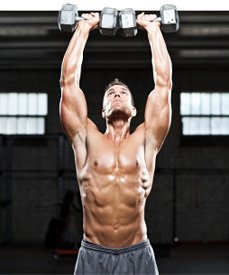 During rescue operations following an earthquake, the concrete building you're in collapses! You're trapped! The only way out will require you to lift the concrete rubble over your head.

Overhead lifting is something we do in everyday life; this move is as functional as it gets. To gain all-around strength in the shoulder girdle, try variations with dumbbells or kettlebells, or even more difficult objects like sandbags.

You're a firefighter rushing into a burning structure to save a life. Before you, a young man lays unconscious. He must be moved immediately to safety.

Sandbag and keg training will increase your ability to pick up an unstable load from the ground and then front-carry that load to safety. With heavier loads, you can feel the strain throughout your entire body; your abs struggle to reinforce the spine, the arms fatigue, and the hips bear the workload. Good stuff.

As a paramedic, your job sometimes involves hazards, but this goes too far. Your ambulance stalled on the railroad tracks with a non-ambulatory victim in the back. A train is coming! No time to unload the passenger to safety—the bus must be put into neutral and pushed over the tracks immediately! 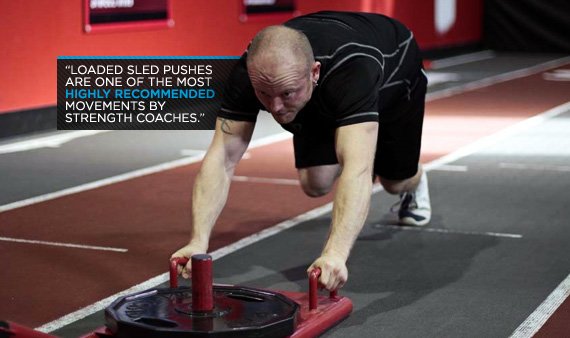 Loaded sled pushes are one of the most highly recommended movements by strength coaches. Brutally hard, sled pushes are benficial for overall conditioning. The work has carryover into sprints as well, which could also save your life in many different scenarios.

You're in another building fire. (Bad week, huh?) Your exit collapses; a very heavy wooden door separates you from safety. You must cut your way through it with the only tool suitable for the job: your axe. 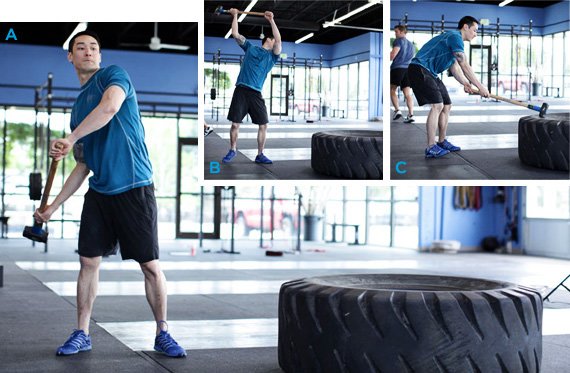 This exercise is a popular conditioning tool among athletes. Simple yet effective, it improves your work capacity, develops your core strength, and enhances your grip. Also, it will make you look like a badass when chopping firewood. Think your mate will want to cuddle next to that fire?

Your battle-buddy has just taken a couple hits while moving across an open area. Oh noes! Drag your buddy behind cover as quickly as possible. If you can, use one hand so you can orient your weapon toward the enemy as you drag your buddy. 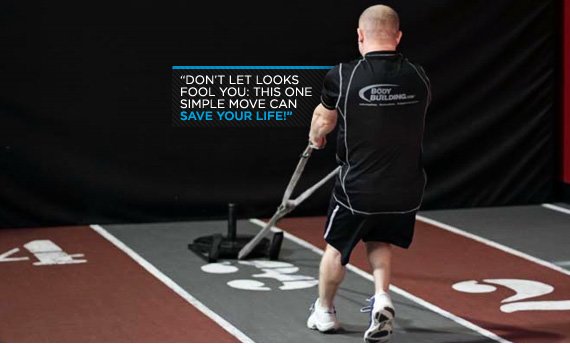 The lifesaver: Sled Drag. A backward sled drag will test the muscular endurance of your quadriceps and lower back. Your arms and upper back will take a decent hit too. Don't let looks fool you: This one simple move can save your life! 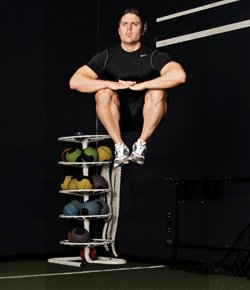 You're writing up a traffic ticket (we won't hold that against you) when a masked man sprints from the bank to his getaway car. Now the driver bears down on your position, pedal to the metal. There's only one thing left for you to do ...

Well, you could jump out of the way, but this is Bodybuilding.com, so we want you to jump OVER the car. The ability to express force quickly is what plyometrics and athletics are all about. In any job that relies on athleticism, jump training is beneficial. But in certain situations, it can also save your life!