Next time you're in the dairy aisle, pay close attention, because there's more than moo juice available. Here's what you need to know to get the most out of the wide world of nondairy milks!

Ol' Bessie the cow was once queen of the dairy aisle, but today she's got plenty of company. When your smoothie screams for a splash of creamy goodness, you've got options. No matter the reason you're avoiding dairy, there's a milk for you.

Here's the rundown on six cow's-milk alternatives and delicious smoothie ideas. Each one has their own nutritional strengths and weakness—and yes, of course you can swap them between the recipes!

What's truly unique about soy milk is that it's a complete protein, meaning it contains all essential amino acids (EAAs). In most cases, only animal proteins contain all EAAs, but in this situation, soy prevails! This is beneficial, because all nine EAAs are necessary to fully "turn on" muscle building.

Soy milk provides a whopping 7 grams of protein per 8-ounce serving. That's only 1 gram less than cow's milk! Despite being a complete protein, soy does take a backseat to dairy when it comes to leucine content—the trigger for muscle growth—compared to the animal-based cowterpart.

Per gram of protein, cow's milk contains 77 percent leucine, whereas soy milk contains 62.1,2 But among plant-based milks, it's still the only one that can legitimately be considered a protein source. 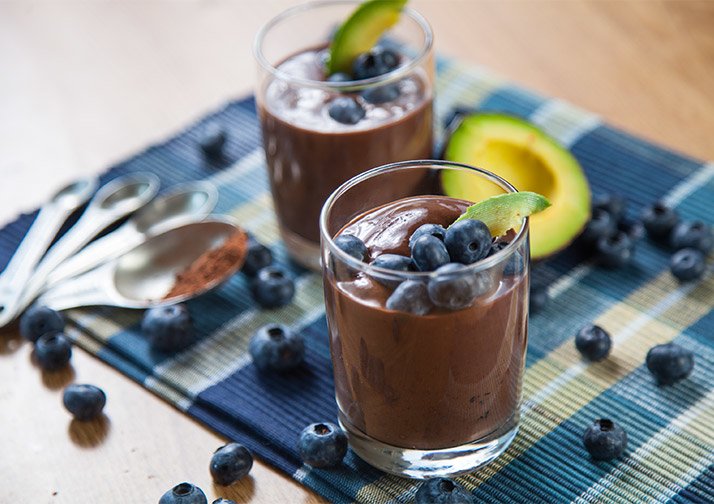 Coconut milk is derived from grating and soaking the white flesh of a coconut in hot water. The remaining liquid, once the cream is removed, is a fatty, flavorful beverage that's popular in a wide range of recipes. It's far different than coconut water, so don't confuse the two.

It's also worth noting that the term "coconut milk" can mean different things depending on what part of the store you buy it in. In the dairy aisle, it might be a thin, sweet fluid in a carton. In the Asian foods aisle (or store), it could be a thick mixture of fluid and cream in a can or box. So step one is figuring out which variety you want!

Coconut milk can be delicious, but can it stand up to soy when it comes to protein? Not a chance—like 0 grams per cup. Rather, its calories come from upward of 57 grams of fat, much of which is comprised of what are known as medium-chain triglycerides (MCTs). MCTs are rapidly digested and absorbed in the blood stream, making them an efficient and quick supply of energy for both the brain and the muscles. 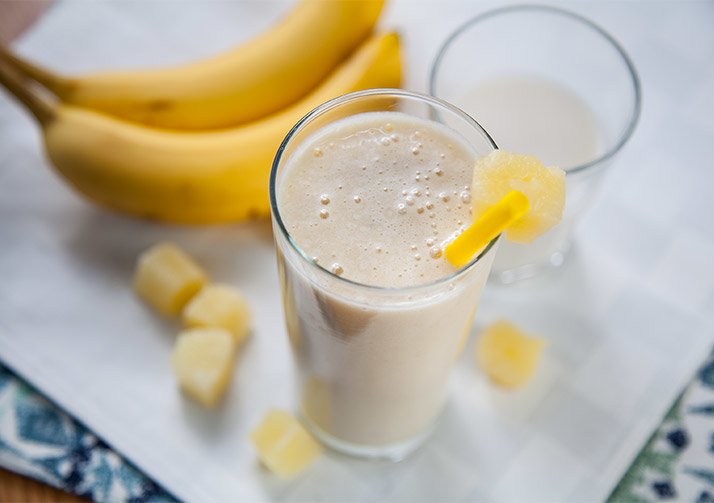 This low-calorie option, made from combining almonds and water, packs just 30 calories per 8-ounce serving. Although it's made from high-fiber, nutrient-rich almonds, the milk itself contains very little nutrition in comparison to the nut itself. In other words, you'd be nuts to rely on it as a protein source (although, it should be noted, several brands offer protein-enriched versions).

So what does almond milk bring to the table? Its slightly nutty flavor adds depth to smoothies, especially if the other option would be water. It plays off of bananas and other fruits particularly well. 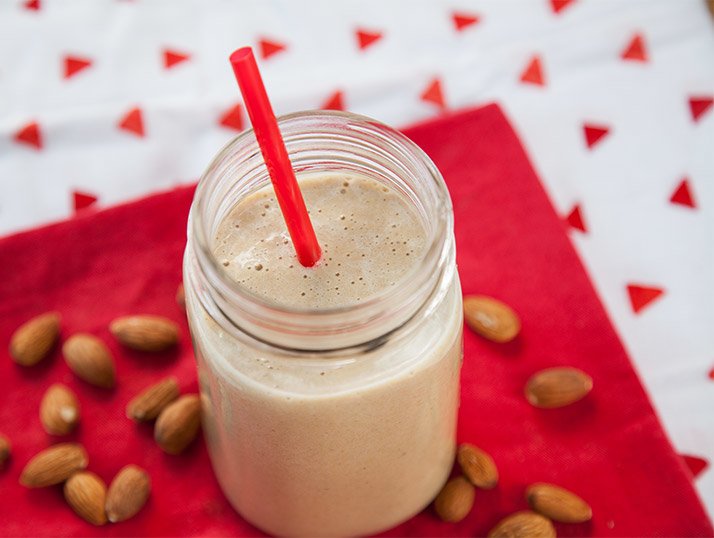 Another nutty milk has taken over the dairy case! This low-calorie milk is a little smoother and creamier than almond milk, and is often fortified with other nutrients, including vitamin D, vitamin B-12, and zinc. All of this for 25 calories per 8-ounce glass!

A glass of cashew milk on its own, well, that's an acquired taste. But its light, slightly sweet flavor provides a nice complement to vanilla and cinnamon in a smoothie. 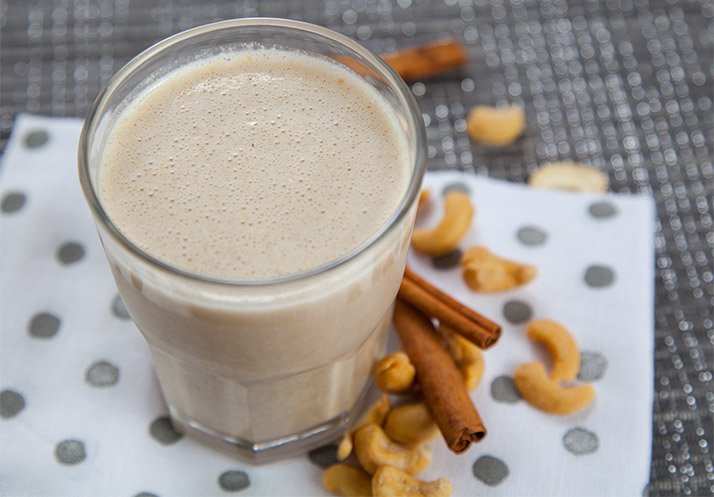 Goat milk is unique in that it actually contains more protein per serving than cow's milk. It's also much lower in lactose, making it a better choice for those with any lactose-intolerance issues who still seek a creamy, liquid protein.

If fat floats your boat, the goat's got it as well, to the tune of 10 grams per glass, a step up from the 8 grams in whole cow's milk's. It's also got 33 percent of your daily calcium needs, which is 5 percent more than cow's milk. Maybe goat milk is the G.O.A.T.?

But how does it taste? It depends on the variety of course, but in general, goat milk is a bit sweeter and creamier than cow's milk, and the "tang" of goat cheese is minimal if it's there at all. 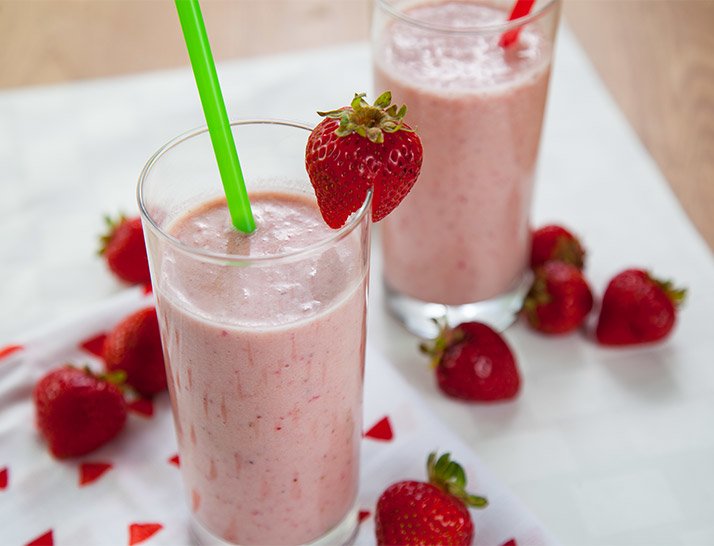 Hemp milk is a high-fat "milk" made from blending hemp seeds with good old H2O (and various thickening agents and additives, in most cases). It's rich in unsaturated fats and omega-3 fatty acids such as EPA. It's also a great source of vitamins D and B-2, containing 25 percent of your recommended daily intake for each.

Hemp milk offers little in the way of protein, so if you're using it in a post-workout shake, you'll need some type of powdered fortification. Be warned: As with many milk substitutes, there are sweetened varieties that contain a significant amount of added sugars. So read your labels! 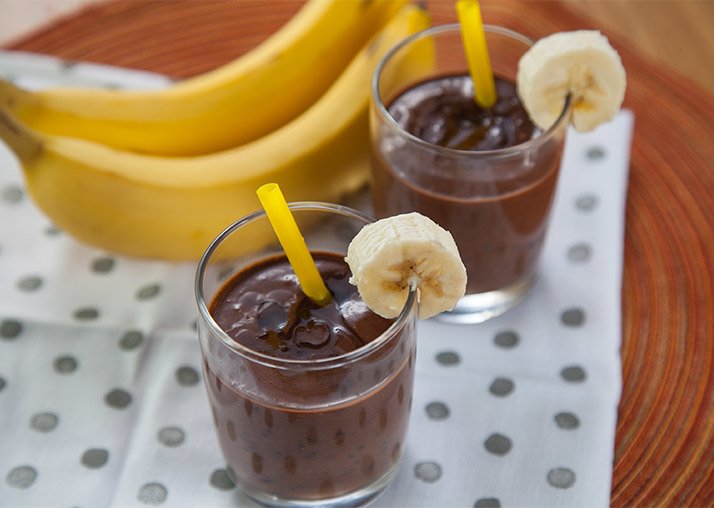