The names and divisions may change over time, but the basics never do. Olympia Weekend is still the where the world's premiere physiques stand side-by-side in fierce competition while the rest of us watch in awe.

This morning, the ladies of fitness, bikini, figure, physique, and bodybuilding sparkled, posed, and presented their best for prejudging. Every woman looked amazing, but there were some surprises in the callouts. Here's what went down.

Before their routines tonight, the ladies of fitness had to show the judges that they had the stage-worthy physiques to match their abilities to dance, jump, and flip. After a short presentation by each woman, the judges lined them up to compare. In the first callout, the judges asked Myriam Capes, Bethany Cisternino, Tanji Johnson, Trish Warren, and Adela Garcia to come forward. Adela looked amazing as ever and found herself at the head of what looked to be the top five. Unless something goes terribly awry with her routine tonight, I think she'll nab her eighth Olympia trophy. 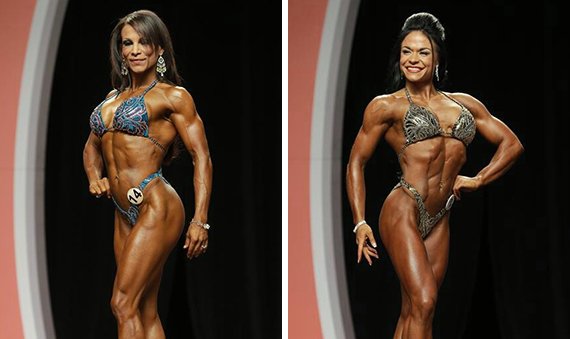 The second callout included Michelle Blank, Ryall Graber, Oksana Grishina, and Whitney Jones. Don't think these callouts are the final say, though; these talented women still have to impress the crowd and win the judges tonight during their performances!

The glamorous bikini competitors showed the world what the perfect combination of fitness, personality, and sex appeal looks like. The lineup was missing some of the usual suspects, but that didn't make the picking any easier. 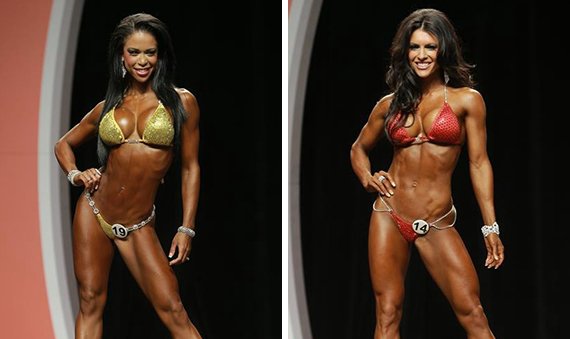 The audience sat in anticipation for a long while before the judges made a first callout. The first six names were Stacey Alexander, Ashley Kaltwasser, Amanda Latona, Yeshaira Robles, India Paulino, and Nathalia Melo. After some re-arranging, the judges sent Stacy, Ashley, and Yeshaira back in line and brought in Lacey Deluca, Justine Monroe, Courtney King, and Tiffany Marie Boydston. The judges made these ladies work! They walked back and forth across the stage multiple times, always in a different place in the lineup. According to the first callout, the judges seem to be favoring a softer, less muscular look for the bikini starlets this year.

After the second and third callouts, the judges brought Courtney King, Amanda Latona, Lacey Deluca, India Paulino, and Nathalia Melo back to the front of the stage. Nathalia looked a little too hard from my perspective, which might hurt her chances of defending her title. Don't give India the win yet, though, because she might have her hands full with Latona. The finals tonight are sure to be an adventure!

In what might be the best Figure Olympia lineup in history, Nicole Wilkins, Candice Keene, and Erin Stern once again separated themselves from the pack. It seems like this trio will battle for the title. All three were in the first callout, along with Heather Dees and Mallory Haldeman. If these ladies bring similar looks to the show tomorrow night, they'll probably make up the top five. 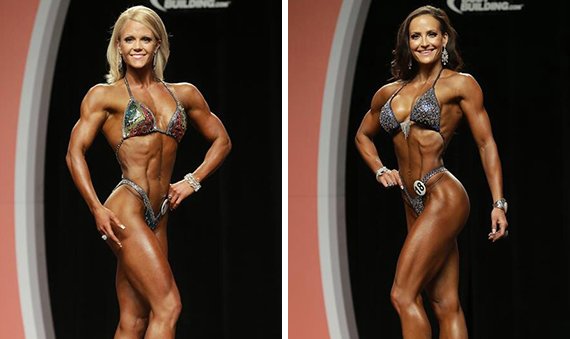 The familiar top three might be the ones to beat, but the entire field of women looked amazing and eminently worthy to compete at the highest level of their sport. The second callout brought Ann Titone, Camala Rodriguez, Gennifer Strobo, Candice Lewis, and Dana Ambrose to the forefront. If the placings hold out, it looks like Ann Titone will round out the top six.

This brand-new division is an excellent addition to the event schedule. Female physique competitors are asked to present a physique that's harder and more muscular than figure, but less massive than women's bodybuilding. Judging by the crowd's reaction, I'd say this new competition is here to stay. 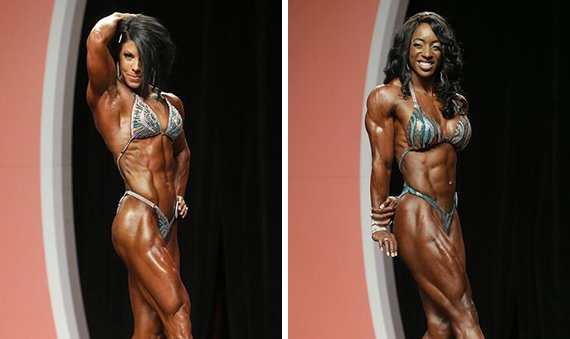 The 16 competitors each did a one-minute routine and were then lined up onstage for posing. Physique ladies perform more traditional bodybuilding poses rather than the quarter turns you'd see in a figure competition.

Dana Linn Bailey, Tycie Coppett, Sara Hurrle, Toni West, and Patricia Mello comprised the first callout. Although there was some worry that the judges may not know exactly what they were looking for, their top choices definitely set an impressive standard for the division. If I were a betting woman, I'd put my chips on DLB, but I'd probably save a few for Tycie Coppett just in case.

What these women are able to do with their physique is awe-inspiring, especially in person. Even if you don't consider yourself a fan, the gorgeous symmetry and perfect lines these athletes are able to create is worth the price of admission to witness. 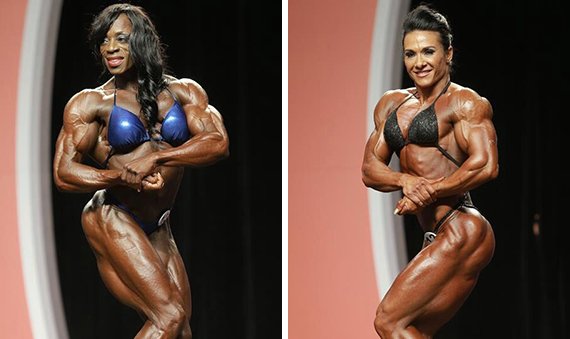 After a posing routine by each competitor, the judges asked Juanita Blaino, Brigita Brezovac, Debi Laszewski, Yaxeni Orgiquen, Alina Popa, and Iris Kyle to come forward. Every single one of these women was insanely shredded, had round, full muscle bellies, and was perfectly balanced. The two that made the biggest waves with the crowd were Alina Popa and, of course, Iris Kyle.

After the second and third callouts, the judges brought Alina and Iris back out to compare them. Alina definitely brought her absolute best physique. Iris may have been slightly better conditioned, but only slightly. Don't be surprised Alina's near-perfect musculature finally breaks Iris's historic winning streak.