History was made on the Olympia stage this morning as the Women's Physique Showdown named its queen. The bodies on these competitors hearkened back to the "classic" 1970 and '80s look, and those who have an interest in bodybuilding history and a nose for the new and exciting have plenty to be happy about.

Well-deserving of first prize, Dana Linn Bailey came in looking full and beautifully proportioned. She also nailed her conditioning: not so hard as to appear stringy, but not so soft that you couldn't appreciate her stunning muscularity. An emotional Dana accepted her trophy and award for $10,000, giving thans first and foremost to her huge fanbase. "Without the fans," she said. "This sport wouldn't exist." 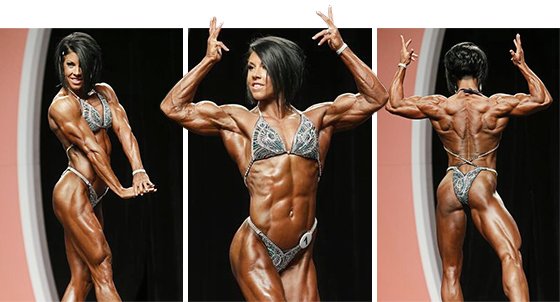 In the confirmation round, Tycie and Dana were called first. Although she was ultimately outmatched by Dana, Tycie Coppett deserves recognition. She posed like a seasoned pro and brought an ultra-competitive physique to the stage. The judges made it a point to describe how tight the competition was. The other competitors in the first callout were Sara Hurrle, Patricia Mello, Jillian Reville, and Toni West.

Sara Hurrle looked incredible; I had no doubt she'd be in the top three, and she'll be one to watch in coming years. Toni West made a huge move by jumping over Patricia Mello to grab that fourth spot. Mello rounded out the top five, the first time she has landed anywhere out of the top two.

For the second call out, the judges asked Karin Hobbs, Juliana Malacarne, Tamee Marie, Karina Nascimento, and Venus Nguyen to come to center stage. Malacarne looked to be a little muscular to fit the top five, whereas Karin Hobbs seemed a little small in comparison with the champs. In the third callout came Mikalia Soto, Jamie Pinder, Sabrina Taylor, Valerie Gangi, and Mindi O'Brien, completing the impressive field.

The Future of Physique

With the first Women's Physique Olympia Showdown now in the books, we can say that the prospects of the newest IFBB competition certainly look bright. The field was competitive and the fans were clearly appreciative of their heroines. Expect more great things from this fledgling division in the coming years.