Tonight, the ladies of fitness lit up Vegas. But none burned as brightly as Adela Garcia. Her eighth Olympia title cements her place as the sport's standard bearer.

The Fitness Olympia is a one-of-a-kind contest. And tonight's event was definitely one to remember. The women competing were all beautiful, talented, and fiercely competitive. Every single woman wanted an Olympia medal hanging around her neck. But, as is true of all contests, there can be only one winner.

Tonight, Adela Garcia added another Olympia crown to her collection. Her perfect combination of tight conditioning and beautiful choreography makes her an unbelievably tough competitor! Her eighth Olympia title not only earned her a check for $28,000 but also an exclusive spot in Olympia history. Even if tonight were her last Olympia show, Adela would have certainly left her mark on the world of fitness. 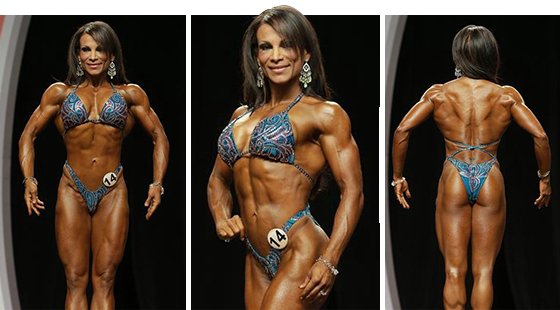 Here's how the top six shook out:

The competitors performed their fitness routines for the judges' score sheets and the crowd's entertainment. Oksana Grishina's dark, dramatic performance was certainly one of the most creative, while Trish Warren's diner waitress act had the whole audience smiling. After each competitor performed, they were brought back in their posing suits for the confirmation round and final placings.

Adela got the top spot, but Oksana Grishina was close on her heels at number two. There were more than a few in the crowd who thought Oksana should have won. Tanji Johnson earned third place, up from fifth last year, and Myriam Capes grabbed the fourth spot for the second year in a row. Fifth place went to Bethany Cisternino. Trish Warren rounded out the top six.

All in all, the Fitness Olympia competitors put on a great show!