Flex Lewis might be the reigning champ, but he's got a talented lineup nipping at his heels. If you want to know how things might shape up tonight, here's the scoop!

The big guys might get most of the press, but the men in the 212 class deserve to be recognized. Don't let the weight class fool you; there's nothing "small" about these physiques. Their density, conditioning, and balance make them just as impressive as the open class! This year's crop was particularly fun to watch, as there were no less than three former champs in the field.

This afternoon, the stage was given 212 men to perform their individual routines. Each of them was unique and entertaining, but none earned more wild applause than Tricky Jackson's. Not only is the man a physical specimen, but he can also dance like a pro.

After each performance, the men were lined up for callouts. The first names called were Kevin English, David Henry, Jose Raymond, and Flex Lewis. It was difficult to decide the best in the group. All of them were super conditioned and posed like champs. Flex could definitely win again, but English and Henry looked very close to his equal. The judges seemed to be having difficulty deciding, too. They had the guys to through their front, back, and side poses at least three times. 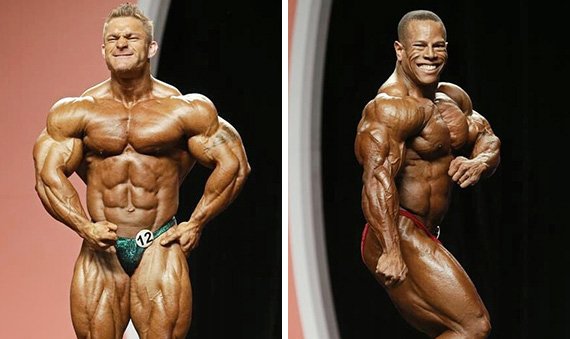 The second callout included Sami Al Haddad, Guy Cisternino, Eduardo Correa, Tricky Jackson, and later Troy Alves. The fight for the fifth and sixth spots will be tough. Each one of these guys brought their best and were ready to dominate the field. In the third callout was Al Auguste, Mark Dugdale, and Raul Carrasco Jimenez.

With nightfall comes the drama. The battle for the 212 Olympia will be a great one. All four men in the first callout have what it takes to win. If they all present the same package they did this afternoon, the judges will have their hands full.