2013 Figure Olympia Preview: Can The Trio Be Defeated?

There are 18 women contesting the 2013 Figure Olympia, but the three women in the top-tier have owned this division. Check out the lineup!

This year marks the 10th anniversary of the Figure Olympia competition. In true Olympia style, there have only been five winners crowned over that decade: Davana Medina, Jenny Lynn, Jenn Gates, Nicole Wilkins, and Erin Stern. Rarely if ever has it been a runaway victory. The Figure Olympia is usually a dogfight between a handful of fierce competitors.

The uber-competitive field has narrowed even more in recent years. The seemingly unbeatable trio of Candice Keene, Stern, and Wilkins has dominated the top spots in almost every competition each has entered. The only thing they have to fear, it seems, is each other. 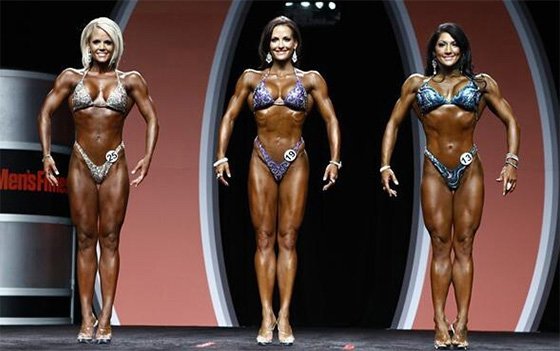 Once again this year, each of these incredible women has something to prove. Although Candice has yet to win the Olympia, she's the reigning Figure International Champion and needs only an Olympia title in order to be at the top of the sport. Erin is the defending Olympia champ, and back-to-back wins would add a fairy-tale sheen to her already illustrious career. Nicole has also won the Figure Olympia crown twice, but lost it to Erin last year and is hell-bent on taking it back.

Until someone else steps up, the question dominating this year's event is: Which of these three will win this time around? If any of them slips, 15 other talented athletes are ready to step forward and announce a changing of the guard. 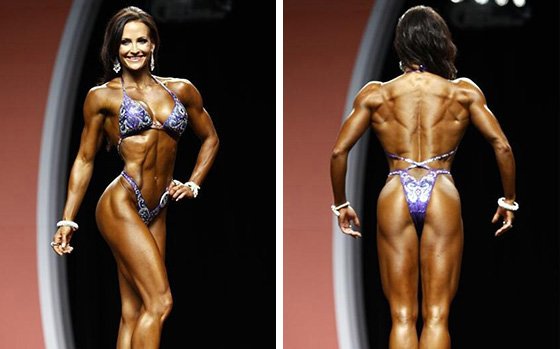 Erin is the defending champ and has the target squarely on her back. She won unanimously last year, following up her triumph with additional victories at the Sheru Classic and the Arnold Figure Europe. There's no question she had her best year in 2012, but when she slipped to third at the Arnold this year, it left some wondering if her peak had passed. She answered her doubters by winning the Valenti Gold Cup for the second year in a row.

When Erin is in her zone, she's tough to beat. She resonates with fans because she's an athlete, trains like one, and it shows. The challenge for her will be to come in full and not lose too much muscle in her legs. But she's the champ for a reason, so look for her to be at her best. 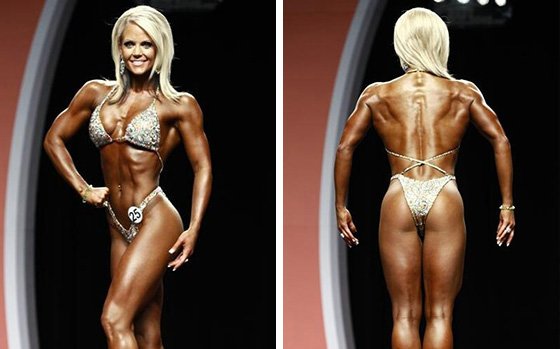 Nicole has been up and down in her placings over the last few shows, but keep in mind that a poor placing for Nicole is third. If there's anyone whose competitive resume demonstrates consistency, it's hers.

After she raised a few eyebrows by opting out of this year's Arnold, look for a renewed, determined Nicole coming into this Olympia. She has the structure the judges love and when she brings a conditioned physique to the stage, she's tough to beat. Don't rule her out of the top spot. 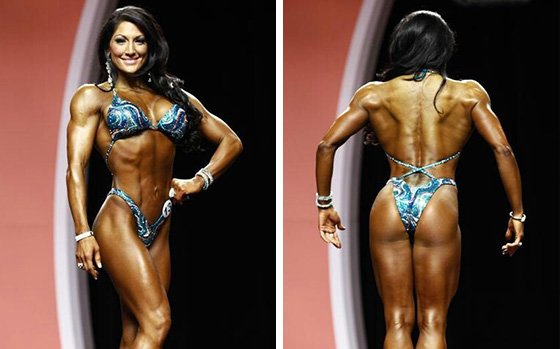 Candice is riding a wave of momentum into this show. She recently signed with Allmax Nutrition and has won three shows in a row. She beat a competitive field at this year's Arnold to start the 2013 season, then followed that with a win at the Australian Pro Grand Prix. This spring, she won the New York Pro Figure for a second time and now she's gunning for the one title that has eluded her.

Candice carries a bit more muscle than the other women in the field and her shoulders can sometimes appear overpowering. She should bring a balanced, conditioned physique without being overly lean. If she does that, she'll make the judges' decision difficult. 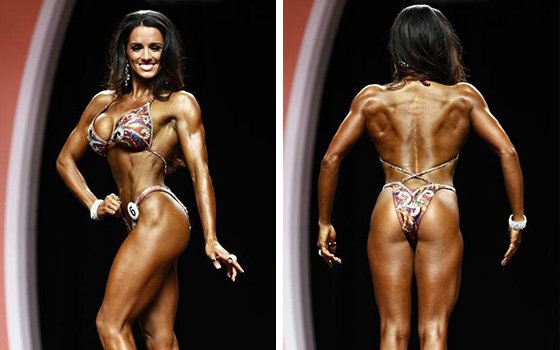 Heather has transformed her physique since turning pro at the 2010 NPC Nationals, and the results have been top five finishes at every show she's entered in 2012 and 2013. You have to go back to her Olympia debut in 2011 to find a finish out of the money. Heather positioned herself as a top contender when she finished second at this year's Arnold Classic—beating Erin Stern, among others—and won the Governor's Cup.

Heather doesn't have the structure of the other top women, so posing plays a big part in her success. After her strong showing in Ohio this spring, don't bet against her. 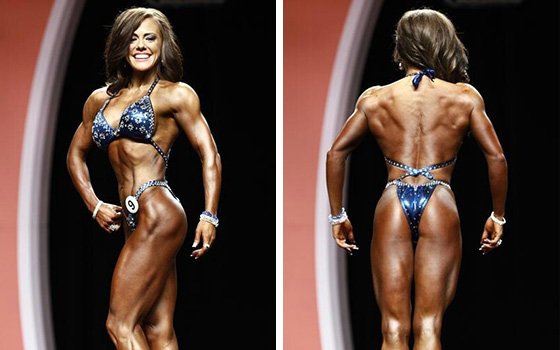 Mallory burst onto the scene in 2012 after achieving pro status at the NPC Junior Nationals. She's never finished out of the top five as a pro— and that's impressive, given she's competed in eight shows. After placing fifth last year in her debut, she has two wins and another fifth-place finish at the Arnold. She's clearly looking to take her place among the elites.

Chalk it up to inexperience, but when Mallory doesn't place at the top her posing is often the culprit. She's improved it this year, though, along with bringing up her back and legs to give her more balance. She's definitely a contender for one of the top spots in her second appearance. 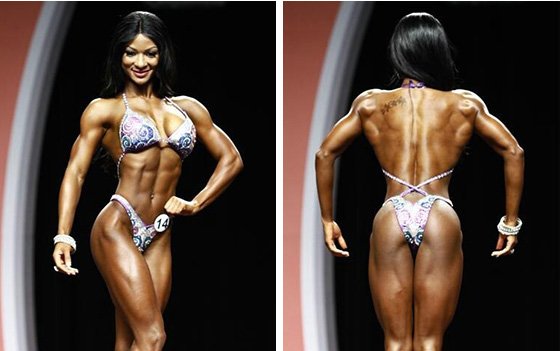 Candice is another wildcard in this packed lineup. After finishing seventh last year, she has won four of her last six shows, and only Candice Keene, Heather Dees, and Erin Stern have finished ahead of her. If she brings in a conditioned physique, she'll be in the hunt for the top spots.

Candice's biggest challenge is bringing tight legs—a downside of years of running track and building muscle. She's split her training time between Denver and Phoenix the last few months, and I expect her to take her place in the top five for the first time. 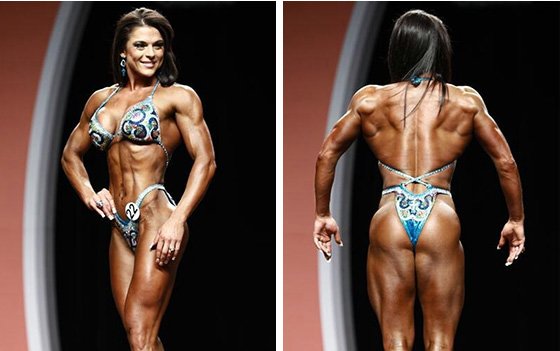 Ann is another competitor who has improved her physique incrementally over the years, addressing weak areas and building balance and shape onstage. Her work has paid off in spades this year; she took top back-to-back honors at the Toronto Pro and Chicago Pro. She finished second earlier in the year at the Pittsburgh Pro and could make a case for having deserved a win there as well.

On the other hand, Ann wasn't at her sharpest at the Figure International in March and landed out of the top 10. I expect her hold her own in Las Vegas and improve on her 12th-place finish at the 2012 Olympia. 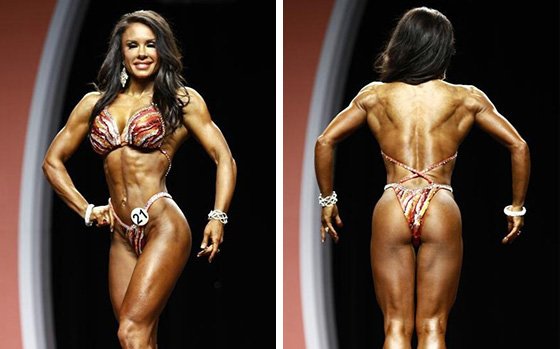 Alea achieved IFBB pro status in the bikini division, but then made the switch to figure, a move that has definitely paid off. She's won two pro shows, including this year's St. Louis pro, but hasn't been able to crack the top 10 at the Arnold or Olympia. She should rectify that if she comes in confident and relaxed like she did in St. Louis. 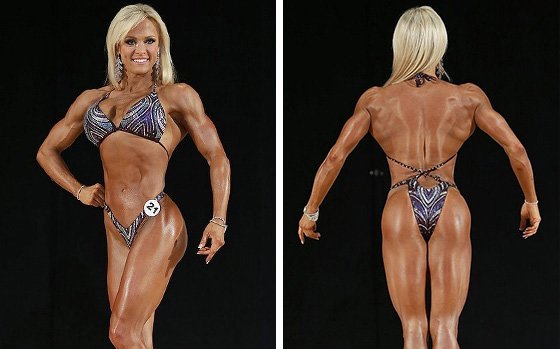 Gennifer has been up and down in her placings, but like many others in this group, she's coming in after a win. After starting off the year with an eighth-place finish at the Figure International, she nabbed back-to-back victories at the Pittsburgh and Powerhouse pros.

This will be her fourth Olympia appearance, but last year she found herself tied for 16th. If she can crack the top 10 it will be a victory for Strobo, but it won't be easy in this lineup. 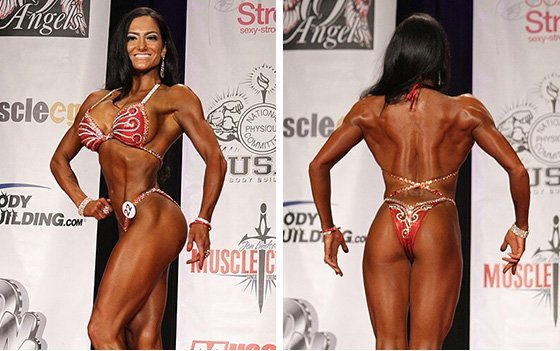 Camala is no stranger to the Olympia stage, but fans might not expect to see her in the figure lineup. She took eighth at the 2012 Fitness Olympia, and then decided to make the switch to figure at the end of last year. She placed third at her first pro figure show and sixth at this year's Arnold, but took top honors at the California State. She was runner-up to Candice Lewis at the Omaha Pro and will look to make her mark at the Olympia. 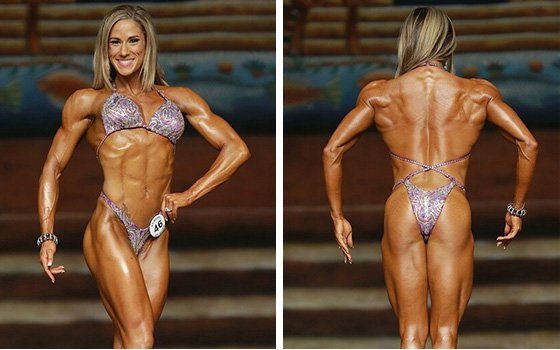 Dana has put together an impressive competition resume in her brief time as a pro. She achieved pro status at the 2012 Junior Nationals and has competed in six shows since then. Dana has never finished out of the top four as a pro, but her biggest challenge awaits her in Vegas.

She looked her best at the Europa Dallas, where she won her pro debut. If she brings a similar look and presentation to the stage in Vegas, she'll make her debut a memorable one.

Kati is definitely a wildcard. She hasn't competed yet against most of the women in this lineup. When looking at photos, you might mistake her for a women's physique competitor, due to the impressive muscle she carries in her quads.

As such, she has fared well in European shows, which generally tend to favor more muscular physiques. She won the 2013 Nordic Pro and will now try her hand against the best in the world. 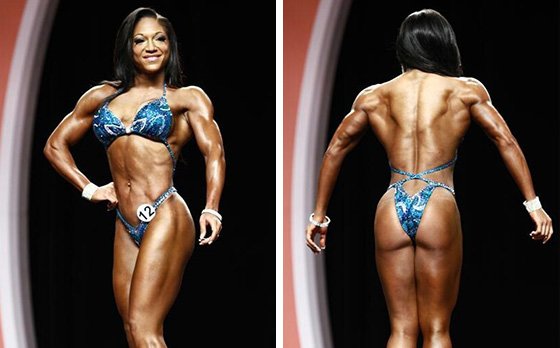 Candice punched her ticket to the Olympia less than a month ago, winning the 2013 Tournament of Champions in California. The win was her second pro victory, and a high point on what has been a rollercoaster career thus far.

Last month in Tampa she placed 16th, and she finished outside the top 10 at the 2012 Olympia. Candice's conditioning will be the determining factor of how she places in Vegas.

The IFBB Pro League has adopted a point system in which five women can qualify for the Olympia based on a points system. While these ladies face an uphill battle to finish in the top five, they're just as hungry as the bigger names, so don't rule them out. 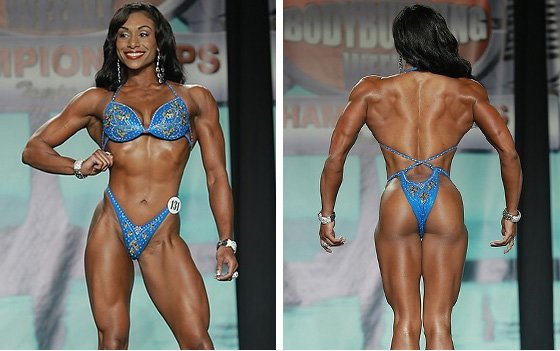 Kamla turned pro at the 2012 NPC USAs and has finished in the bridesmaid spot five times since her debut. She has the potential to be a top contender, but as her 10th place finish at the Arnold shows, she still has some things to work on, like stage presence.

In some competitions, her poses have been a bit off, and she brought little too much swagger. If she cracks the top 10, she'll have made a successful Olympia debut. 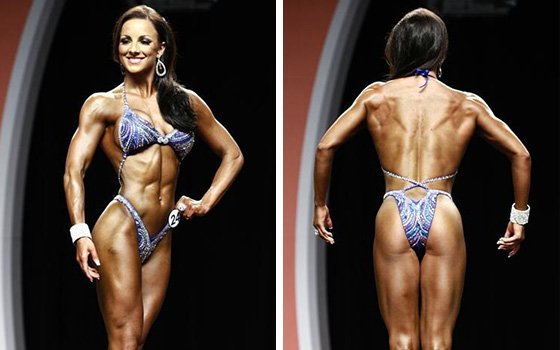 Natalie will be the lone Canadian representative in the figure division. She doesn't have the most muscular physique in the show, but she has excellent structure and has developed a polished, confident look onstage. She landed in 16th at the Arnold, but then knocked out four top-five finishes to get back on the Olympia stage for the third time. Anything higher than her two previous 16th-place finishes will be a victory. 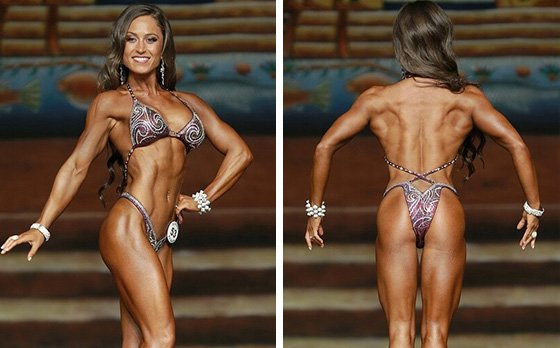 "Frenchie" shocked the figure world earlier this year when she placed ahead of Nicole Wilkins in New York. She'll look to make waves once again in her Olympia debut. Swann made a name for herself in the amateur ranks and debuted at the Pittsburgh Pro, finishing 10th.

She wasn't at her best there, but looked like a completely different person when she took the stage in New York. If Swann can radiate the confidence and bring the physique that nabbed her second place in New York, she'll hold her own. 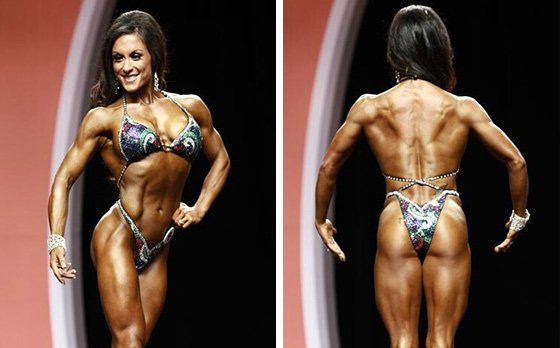 Allison Frahn has placed in the top five in every show she's entered this year. She continues to refine her physique and beams more confidence each time she competes. Allison took eighth at last year's Olympia and has proven that she can hang with top contenders. Don't be surprised if she places ahead of a few women who have already won shows this year. 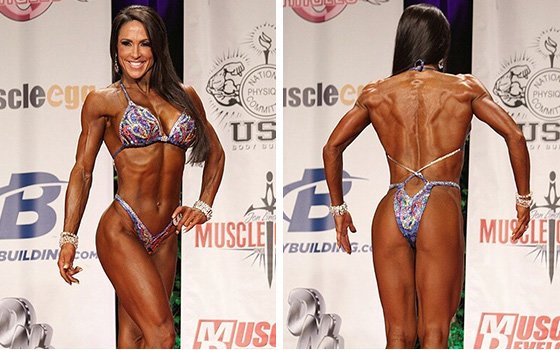 Kim Sheppard snuck into the final qualifying spot, on the last possible show, by one point. She'll be on cloud nine entering her first Olympia, and don't expect anything but a mile-wide smile. But also don't be surprised if this newcomer upsets a few veterans in her first trip to the big show.

I'm no judge, but I have trouble seeing how anyone is going to challenge the big three for now. Here's how I see the top six shaking out.