2012 Road To The Arnold Classic: Champ Branch Warren Readies For The Stage

A bodybuilder's most important muscle is his heart, and greatness comes from within. Branch Warren knows this better than anyone. He works, trains, and lives like a champion.

Meet the 2011 Arnold Classic champion: he's big, he's bad and he's ready to reclaim his throne. He hit a speed bump or two since last March, including a serious injury, but from the looks of things, he's ready to roll. So look out Columbus. Rolling thunder is headed your way.

Branch Warren doesn't say much; he usually lets his physique and his many trophies do the talking. But for Bodybuilding.com, Warren opened his home and his gym. Get a glimpse into the life of one of the baddest men to ever pick up a barbell.

Branch speaks softly but carries massive weight. Respect. These videos speak for themselves.

Meet the Branch you don't see in the gym: the guy who loves his family, plays with his dogs and knows what it means to overcome adversity with class.

Bad@ss Branch Warren shares his shoulder workout as he prepares to defend his title at the 2012 Arnold Classic. 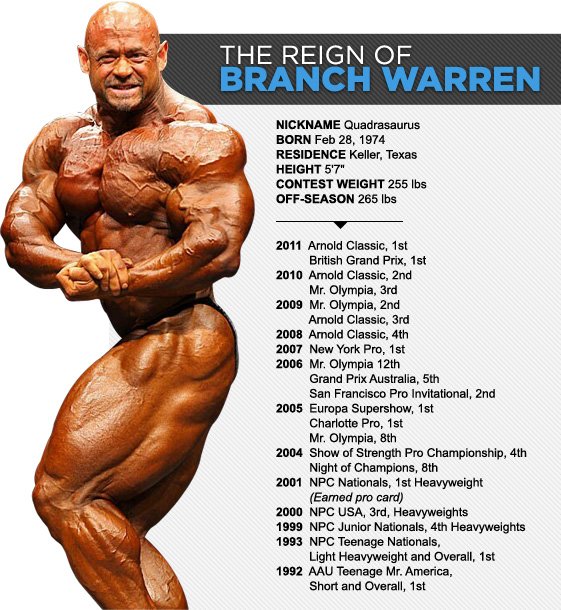