The gorgeous girls of IFBB Fitness, Figure, Bikini, and Women’s Bodybuilding stunned the stage at this morning’s prejudging. Get our top picks!

It's finally here! The highly anticipated 2012 Olympia Weekend is upon us. The world's best physique athletes are ready to battle under the Vegas lights for the IFBB's most prestigious titles. This morning kicked off with women's prejudging, and the ladies lit up the stage.

Prejudging started with a beautiful bang: the fitness physique round. As expected, Adela Garcia—six-time Olympia champion and reigning Fitness queen—was a top contender. Tanji Johnson, who has placed second to Adela for the last three years, looked better than I've ever seen her. Her physique is worthy of the crown; we'll see if her routine is up to par. 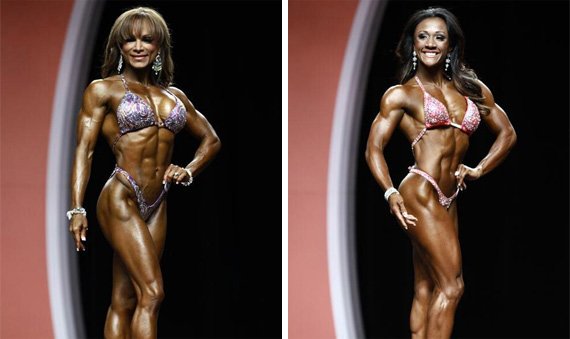 Bethany Cisternino looked fantastic; her symmetry is phenomenal. I am a huge fan of the look Bethany brought to the stage. Tina Durkin looked amazing, as well. Based on the physique round, she may sneak into the third spot.

Myriam Capes looked great, as always. She is incredibly consistent with her look—always lean and symmetrical. One thing that does hurt her, however, is her quad sweep. Overall, Myriam looked great and has a killer physique.

Fan favorite and absolute beauty Oksana Grishina was in the second callout. She was softer than I have seen her. She doesn't have the narrow waist many competitors possess, which may hurt her symmetry. However, Oksana is an incredible performer, so her routine tonight should stun.

Let's be honest, after watching thirty-two beautiful women strut their stuff, it's got to be hard to not get lost in the haze of glitz, glamour, and grins. The judges had a tough job to accomplish, and I definitely respect them for it. Here are the top bikini beauties.

Fan-favorite Nathalia Melo looked absolutely stunning. Her abs were lean, but not too shredded. In the past, they may have been too lean; she seems to have found a good balance. 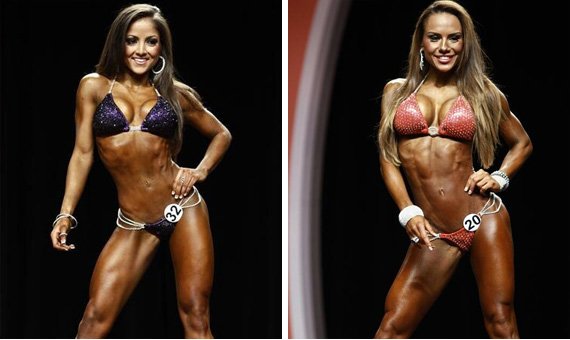 India Paulino, who has been having a great year, looked phenomenal. No matter what show she enters, she stands out. Her stage presence is fantastic, and she's very consistent with her conditioning and muscularity. I am a fan of her well-balanced physique.

Nicole Nagrani, the reigning Ms. Bikini Olympia, looked like she came back to defend her title. She was poised and elegant, with a beautiful, balanced figure. She was wearing a purple suit—a change from her red suit at the Arnold Classic—and I loved the color on her.

Dianna Dahlgren, who came in third place last year, will likely be in the top six this year. Her smile and beautiful figure stood out. With her blonde locks, she is definitely at her best.

I was surprised by the last callout: The judges called Amanda Latona, not Jaime Baird. I am a huge fan of Jaime's figure and presentation. She seemed a little more relaxed and a little less "rehearsed." Amanda's figure is a little less appealing to me. Being from Las Vegas, she is definitely a crowd favorite. Of course, it's anyone's show tonight!

The judges cut to the chase! The first callout was Erin Stern, Nicole Wilkins, and Candice Keene, which came as no surprise. Nicole looked a little tighter than she did at the Arnold Classic, and Erin looked leaner than at the Sarasota Pro. It was interesting to see them battle!

I am a big fan of Erin's look; she is symmetrical, muscular, and not too lean. She has great back density, which I've always thought Nicole lacks. With these two, it's pretty much a tossup-they both look amazing, and I could see either one winning the title. 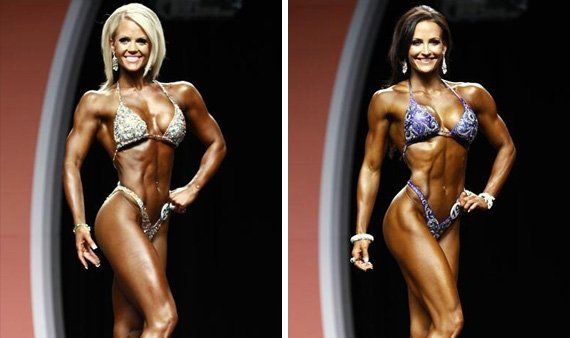 Candice would be a clear third place, though I was surprised that she didn't look as sharp as I've seen her in the past. Her abs weren't as crisp as usual, but she showed great symmetry without excessive muscularity. She pops when she poses, and stands out from the pack.

Heather Dees has moved up the ranks over the last year. She doesn't have the best symmetry, but the judges seem to like her physique. Her posing could use some work, but she managed to pull her nerves together.

Mallory Haldeman, who is making her very first Olympia debut, looked absolutely stunning. She snuck into what seems to be the top six. I was very impressed with her figure; she's very well balanced.

I was shocked Ava Cowan didn't make the top six! She has made so many small, yet notable changes. She toned her conditioning down and came in tight. Her symmetry has improved. She even changed her hair! I thought she looked incredible.

All I can say is—wow! Everyone brought their "A" game. The ladies stepped up to the plate and delivered amazing conditioning and symmetry. I was really impressed. Every single woman in this category was on point. 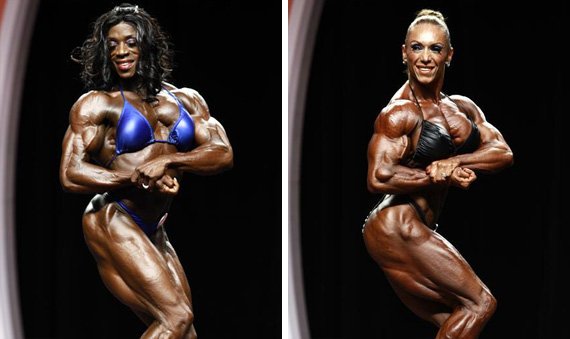 Debi Laszewki looked insanely shredded! She was so lean, with full-on glute striations and a grainy, hard look. I was very impressed by her physique. Yaxeni looks like she sacrificed some size for conditioning, though it's hard to say whether that will give Yaxeni an advantage.

Brigita looked phenomenal, as well. I would place her behind Yaxeni, whom I would place in third. Brigita was full and lean, with spectacular symmetry. She has made so many good improvements over the years and her hard work has certainly paid off.

In the second callout, the judges called Sheila Bleck, Alina Popa, Anna Luis Freitas, and Monique Jones. I was very impressed with Anna Luis Freitas' physique, as well as Alina Popa's shape. Anna Luis Freitas is making her Olympia debut. Watch out for her! She needs to polish up her posing to better showcase her muscular physique. For now, I think Alina Popa will win in this group.