Are you ready for Vegas? Find out who's in, who's out and who's going to be on top at this year's Olympia Open.

The end of September promises to bring excitement and great competition. The new qualification series, surprise injuries, and new players are ingredients to what could be a recipe for one of the most competitive Olympias ever.

The guys in the Open have their work cut out for them. Phil Heath will try to defend his title without the heat of his long-time rival Jay Cutler. But the forums are buzzing with an intense Kai Greene fever. Branch Warren, who had to miss the 2011 Olympia due to a leg injury, is coming off an incredible Arnold Classic win 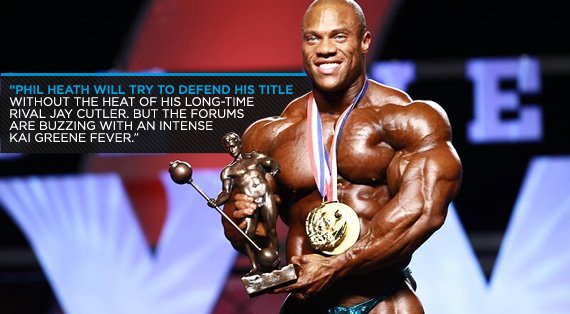 Victor Martinez, last year's fourth-place winner, ran into big-time immigration problems and spent seven months incarcerated. Because he couldn't eat or train properly for those seven months, he decided he wouldn't be ready for the 2012 Olympia. The rest of last year's top six—Kai Greene, Dennis Wolf, and Dexter Jackson—are all back and ready for action.

In addition to Jay Cutler and Victor Martinez, Cedric McMillan, Jon Delarosa, and Juan Morel have decided to forego this year's Mr. Olympia competition. According to my sources, Balto Abbaspour may not be competing either, but that hasn't been confirmed.

Despite a few missing competitors, the usual suspects will be there to compete. But, we can't forget about the dudes making their debuts. Evan Centopani and Ben Pakulski look incredible and are hoping to break into the top six on their first tries.

This year, my predictions for the open are a little messy. Anyway you look at it, the end results and placings are difficult to guess. Lots of guys could come in shape and give the judges a real headache.

In the same vein, many guys could miss their peak and place far lower than they and their fans expect. But, I'll give it a shot:

A few quick glances at the forums and the various magazines reveal that most people predict Heath and Greene to be in the top two spots. Most are in agreement that Phil will win his second Mr. Olympia title, but the diehard Kai fans see Heath falling to second.

I think it's fairly safe to predict that Phil Heath will win the competition again this year, especially with Cutler out of the picture.

I think Greene will push Heath to the max and it won't be an easy win, but Heath will come out on top. Greene has second place all wrapped up.

I can't see him placing lower than that, if he's in great condition, of course.

When Heath and Greene are on point with their conditioning, there isn't another competitor who can beat them. I think third place will go to Dennis Wolf.

A third-place finish would be his highest Olympia placing yet.

Branch Warren will place fourth because he won't be able to hold off the Wolf this time around. Even though I was one of those people in attendance at the Arnold Classic who thought Branch deserved his victory this year, I think Dennis Wolf will have the best showing of his career and place ahead of Branch.

I think fifth and sixth place are more difficult to predict this year than the top four. Evan Centopani is my pick for fifth in his Olympia debut.

Holding Evan back is his chest, which has always been a little on the flat side. He could also use better quad separation and control.

When it comes to Olympia predictions, the 6-12 area is where it gets even more difficult. This year is even a little more challenging because each guy had to win or qualify via points. This year, the quality of the competitors is way up.

That sixth position is a toss-up because there are a few guys who could easily hit their mark. The battle for sixth place will likely be between Shawn Rhoden and Lionel Beyeke. But, Beyeke has to come in peeled instead of holding some water like he did at the Flex Pro and Arnold Classic earlier this year.

If Lionel is indeed waterlogged again, then Rhoden has sixth place all sewn up. I doubt that Toney Freeman, who still hasn't matched his 2008 Olympia condition, can place ahead of the much-improved Rhoden. 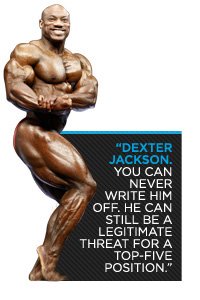 Dexter Jackson will most likely be somewhere in the 6-8 range. You can never write him off. He can still be a legitimate threat for a top-five position.

It's only been four years since Dexter won the Olympia, but his conditioning has been off to a varying degree ever since. Realistically, Dexter could place anywhere from 4th or 5th, to 9th or 10th this year.

So now you're asking where do Ben Pakulkski and Roelly Winklaar fit in, right? That's easy. Somewhere between 7 and 12!

And Hide and Rockel? You got it: somewhere between 7 and 12. You can throw Johnnie Jackson into that mix as well.

The Rest of the Pack

Not necessarily in this order, but Bill Wilmore, Fred Smalls, Michael Kefalianos and Essa Obaid will be among the last places.

They're among the best bodybuilders in the world, and they've all done well in competitions this year. But, someone's gotta come in last.

I invite you to break out your crystal balls and put up your own predictions on the IFBB Pro forum here on Bodybuilding.com. Give it a shot and be brave! Someone will have bragging rights when it's all done!

September just doesn't get any better in our little world, does it? See you in Vegas later this month!