Defending Bikini Olympia champion Nicole Nagrani has never finished lower than third as a bikini pro. This 20-year-old MET-Rx athlete has the discipline of a seasoned veteran.

Nicole Nagrani blossomed on the IFBB pro bikini scene in 2010 with a resounding victory in her debut at the Pro Bodybuilding Weekly Championships. Later that year, the 18-year-old took third at the 2010 Olympia, one of only two times she finished anywhere other than the top spot in her pro career.

Nagrani mastered the art of looking her best, returning to the scene of her initial win at the 2012 Pro Bodybuilding Weekly. However, she showed she could be beaten at the 2012 Arnold Classic, where Sonia Gonzalez and India Paulino took the top two spots and Nagrani trailed in third.

Nicole is known for her relaxed approach to pre-competition preparation, but she has all the features covered: perfect shape, skin tone, facial features, and stage presence. She pushes other competitors to bring their A-game at every competition. It will take a monumental effort to unseat her from her position as queen of the bikini world.

Q
You have won five out of the seven pro shows in which you have competed. What is it about your physique and stage presence that so often places you in the winner's circle?

Honestly, I think the confidence I carry on stage is one of the main factors that allows me to place so well. Growing up an all-star
cheerleader, I am familiar with being
on stage, and I enjoy being in front of
a lot of people. Therefore, the transition
into competing was fairly easy. As far
as my physique goes, I think my glutes and my legs are well-developed from my years of cheerleading and track, and those muscle groups are key attributes when hoping to place well in the bikini division.

Compared to your 2011 pre-Olympia preparation, have you made any program changes for this year's event?

I definitely have given my all in preparing for this year's Olympia. When it comes to training, I haven't changed much since the 2011 Olympia besides trying to add a little size up top. My mentality, however, is a lot different, because I am determined to maintain my title.

As a bikini competitor, how do you prepare for events as compared to a women's bodybuilding or fitness athlete? How does the physical development criterion for bikini competitors differ from what the judges expect from other physique athletes?

Bikini training is different from the other divisions because we concentrate more on tone versus adding size. When training, I incorporate a lot of plyometrics, and when lifting weights I do more reps versus emphasizing heavier weights. In bikini, I believe the judges are looking for an overall tight and toned body. Enough muscle to show that you work out, but not an excessive amount that might make you more suitable for the figure division.

What is your nutritional strategy? How does your diet change from offseason to pre-contest?

My meal plan doesn't change much from offseason to competition prep because I try to stay pretty close to stage-weight year round. Offseason, I eat more of the good food that I eat in season, but I may also enjoy some of my favorite foods more often. 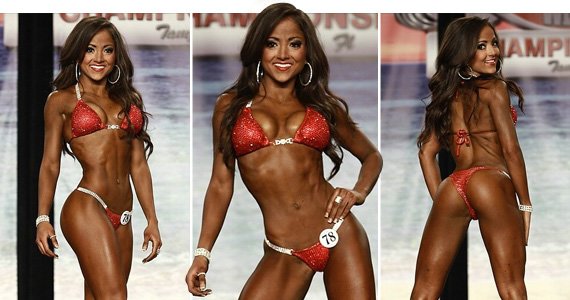 What training and nutritional changes will you be making as the 2012 Olympia draws nearer, especially in the final 2-3 weeks?

My competition prep stays same throughout the whole process. Even leading up to the week of the show I don't deplete or cut water. The training just becomes higher in intensity and my cardio may increase.

How influential do you think your mental state is when preparing for a show?

My mindset during prep for a show is just extremely focused. I just do the best I can, give it my all, and wish for the best. I think just doing what I need to do and not overthinking everything is really good for me because I never psych myself out.

As the current Bikini Olympia champion, what additional pressure, if any, is on you to bring the best package to the stage?

Of course there is some extra pressure to maintain my title, but I've already confronted that when competing in the Arnold this year. At the Arnold, I placed third and therefore I lost my title. Now, I just have more motivation to do better at the Olympia.

You have only been competing at pro level for three years, yet you have achieved more than most bikini competitors would in a lifetime of competing. To what do you attribute your rapid success?

I believe my success can be credited a lot to my upbringing. My parents had high expectations for my brother and I, and I always did my best to go above and beyond. I took this mentality and really applied it to everything that I do. So when it comes to competing, I try to figure out what works, do my best to bring my best package and keep working to improve. I may have only been competing as a pro for three years, but I was already training and did my first competition at the age of 14. So I am really familiar with the sport and have always enjoyed watching the competitors. I think having an appreciation for the sport and a lot of passion is core to how I have been able to do so well.

Compared to other high profile IFBB pro events, what is the atmosphere like competing at Olympia level?

Whenever I think about taking the stage at the Olympia, I get goose-bumps. Being on the Olympia stage is surreal! Every minute of being on that stage is an honor.

Looking out into the masses of people and the bright lights is just incredible. As a younger person I used to watch the Olympia every year with my parents, so it's really like a dream come true to stand on that stage.

I love the atmosphere at this show, because everyone who attends this show is a fanatic for the sport of bodybuilding. It's great to be surrounded by people who appreciate and understand the hard work and what it takes to earn a bid to the Olympia.

What do you feel will separate you, physique and presentation-wise, from your nearest competition at
this year's event?

Every single competitor on that stage is different; from the posing, to the suit color, to genetics. When you're looking at the best bodies in the world it's hard to find things that make one person look better than the other because everyone looks so good. Ultimately, I think it all just boils down to who looks the best on that particular day. There aren't any extreme defining characteristics that separate me from the others.

I don't know where I will place this year, but I do know that I will do the best I can to bring my best package. I'm not going to create placing expectations for myself because it's not about how you place all of the time. It's about whether or not you do all you can to look your best. Did you do all of your cardio, stick to your plan, and train as hard as possible? If you give it your all and feel happy with what you put in, then no matter what you get out of it you are still a winner.

I am so thankful for all of the fans who have been supportive of me since I've turned pro. The fans keep me motivated to keep progressing and serve as a role model for other aspiring successful competitors. I look forward to meeting everyone this year at the Olympia, so make sure to stop by the MET-Rx booth for pictures!