Diana Dahlgren became a star almost as soon as she turned pro. A 2012 Olympia bikini title would be her greatest athletic triumph to date.

To say Diana Dahlgren's rocket to the top was rapid would be an understatement. Just weeks after beginning her fitness career in 2009, the former gymnast was contacted by the editors of FLEX to arrange a photo shoot. A few months later she landed her first major cover, on Muscle & Fitness, no less.

In September 2009, she won the NPC Team Universe, receiving her pro card and an opportunity to become one of the biggest names in the fitness world. Since her pro debut, she has won at the 2010 Europe Battle of Champions, the 2011 Phoenix Pro, and, most recently, the 2012 Los Angeles Pro. After placing third at last year's Olympia - a rise from ninth in 2010 - she is poised for success at this year's event.

To become a top contender in any pro physique division requires years of sacrifice and daily struggle. Dianna Dahlgren has achieved so much, so soon, in such a competitive industry, which says much for her work ethic, natural talent and competitive potential.

You had a number of prominent victories since turning pro in 2010. How does it feel to win pro events as opposed to placing in them?

Winning at anything really makes you feel accomplished. I've worked my butt off before and just placed, then there are the shows I work my ass off for and win. At any show I place at, I just make sure I stay humble and if I'm not the best that day, then so be it. There will always be another competition that I will be the best in.

What is it about your physique that so often places you in the winner's circle?

I think it's the balance of my physique. I have a nice backside and front. I've constantly been working on flattening out
my abs. A lot of times my abs come in way
too cut, so over the past year I have worked on
filling them in. I know that's what the judges like
to see in bikini competitors.

What motivates you to be at your best year
after year?

Right now, this is what I want: to compete and be the best I can be every time. As soon as I feel completely accomplished in my competition career, then I will move on to something else and retire, but for now, each competition holds its own motivation for me.

Yes, I have more than anything else focused more on my glutes and legs. I pretty much have everything where I want it to be so I just really focus on keeping it the same.

There is a misconception that bikini competitors do not train as hard as competitors from other pro physique divisions. How do you train to develop enough muscle to contest the bikini division without becoming overly muscular?

I was a gymnast for nine years during my childhood. So my muscularity is there because of my athletic upbringing. I do workouts that tone rather than build. Bikini competitors do work as hard in the gym. A majority of us do cardiovascular-based training, which exerts massive amounts of energy! It's just a different form of training compared to the traditional weightlifting style of training competitors from other divisions might adopt. But it takes just as much effort.

What is your nutritional strategy? Do you eat clean all year round?

No, I don't. I think I would lose my mind if I did. I like to enjoy my life and sometimes I just live normally. Of course, nothing crazy, but I don't kill myself if I have dessert a couple times a week. A lot of girls stay on point all year and I'd love to be like that, but sugar does the body good sometimes!

Of course moderation is the key. I've learned that you can have a little, but not a lot. Too much hurts you mentally, physically and spiritually. 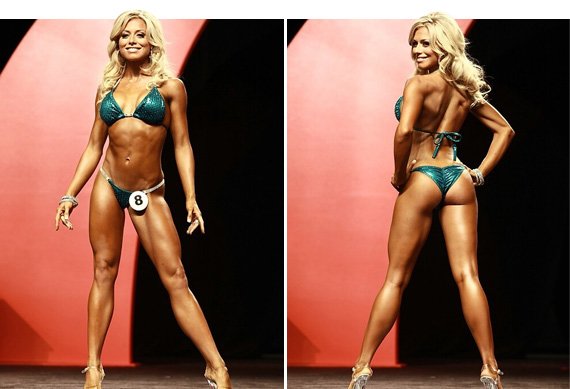 What training and nutritional changes will you be making as the 2012 Olympia draws nearer (especially in the final 2-3 weeks)?

It all depends on what my physique tells me. If I'm on point, I'll be eating a lot! If I need to clean it up more, then my diet will be stricter.

Oh, it's a crazy mental game! For the most part, I just focus on the day of competition and how much I love getting ready for prejudging and how much fun I have on that day. I endure many days of hard work, bitching, and crying for one day of pure bliss. No matter what happens at the Olympia, I will be sure to have fun because it's out of my hands. It's in the judges' hands and they have full control over who wins and who does not. All I can do is pray, stay focused, and have fun.

Compared to other high profile IFBB pro events, what is it like competing at Olympia level? Is there greater pressure to be at your best? If so, then why?

Yes, there is pressure, but for me it's a good pressure because I know there's so many great bodies it really comes down to stage presence and overall package. I just stay calm and relaxed and, like I said, have fun. 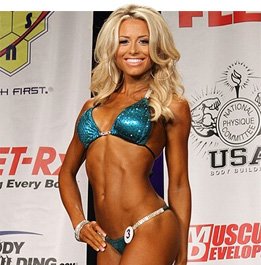 Placing third in the 2011 Olympia bikini category has positioned you as a top contender for this year's division. What do you feel will separate you, physique and presentation-wise, from your nearest competition at this year's event?

I'm bringing in the whole package: physique, attitude, poise, presentation, and personality, everything I need to win! We'll see what happens on the Friday of the show.

Where do you feel you will land at the 2012 Olympia, and why? Do you see yourself as a favorite to win?

I sure hope so. I will just stay in a good place and push toward that goal. If I win, I don't know what I will do. Probably cry [laughs].