IFBB Pros Light Up The Sky In Houston.

The Fourth of July weekend served as a perfect backdrop for the revival of the Houston Pro Bodybuilding, Fitness, and Figure Championships. The two-day event attracted nearly seventy-five top professionals from around the world.

The Fourth of July weekend served as a perfect backdrop for the revival of the Houston Pro Bodybuilding, Fitness, and Figure Championships. The two-day event attracted nearly seventy-five top professionals from around the world and the holiday weekend did not deter the fans from turning out in droves.

Silvio "The Matador" Samuel arrived in H-Town as the man to beat. At first glance at Samuel's physique it appeared he would have a runaway victory. His shoulders seemed wider and the sweep of his thighs made his already symmetrical shape even more pronounced. Yes, it looked like it may be an easy night for Silvio. 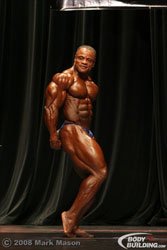 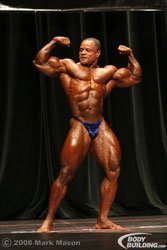 Silvio Samuel At The 2008 Houston Pro. 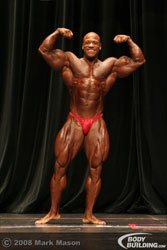 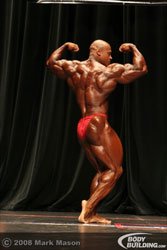 Craig Richardson At The 2008 Houston Pro.

Another dark horse was Leo Ingram. Ingram's conditioning and vascularity was nothing short of phenomenal. As the prejudging unfolded Ingram gained a confidence that bordered on cocky. Ingram had his sight on the third place slot, which would qualify him for the Olympia. 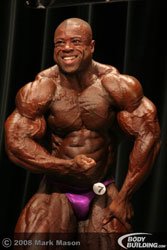 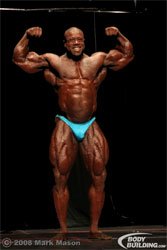 A very impressive Armin Sholz came all the way from Germany to claim an Olympia qualification and was not about to surrender without a battle. Another standout was Big Bill Wilmore. Wilmore is the nicest guy you will ever meet…but on-stage he can bite like a junkyard dog. 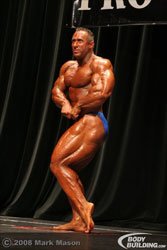 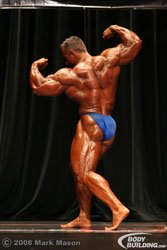 Crowd favorite Darrem Charles, who has won at least one show a year since 2002, blew into town aiming to keep his streak alive. He fell short of the overall but missed cracking the top five by two points. 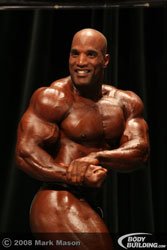 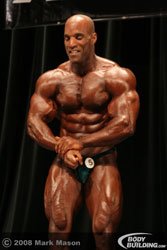 Darrem Charles At The 2008 Houston Pro.

Pound for pound the under 202 winner, Ray Arde, made one of the best showings of the night. His rivalry with Tricky Jackson and Jeffrey Long made for a great side match in an already spirited evening. Arde took the title as well as a check for three thousand dollars back to San Jose. 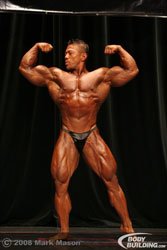 Spaniard Francisco Bautista was freakier then usual. He was nearly as wide as he was tall with tugboat rope veins crisscrossing his chest, back and legs. His posing routine was anything but pretty. He tossed off one classic pose after the next landing them like a George Foreman left hook. 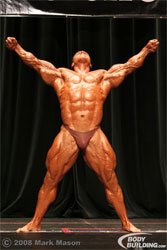 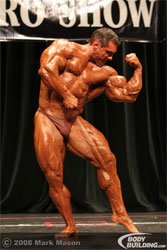 Francisco Bautista At The 2008 Houston Pro.

Two more imposing physiques that demand mention were Russian Evgeny Mishin and Canadian, Fouad Abiad. Both had thick backs and chests that looked to be carved out of marble.

Promoter Lee Thompson was all smiles as he stood in the victory pose along side the ever-youthful looking Lee Labrada and Silvo Samuel bringing to close a fabulously successful show. Silvio also was also in high spirits not only in taking the title but a good chunk of the twenty thousand dollar prize money.

The Houston Pro fitness division attracted over twenty competitors from Canada to Venezuela and all points in between.

Overall winner, Tracey Greenwood was still riding high from her 2007 New York Pro and Atlantic City Pro wins as well as her very respectable 5th place Fitness Olympia. Her conditioning was her usual top shape and her routine was stronger then her recent past. Her nearest competitor was rival Shannon Meteraud who placed a mere twelve points behind Greenwood. 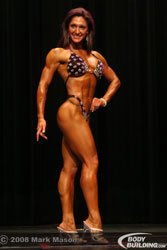 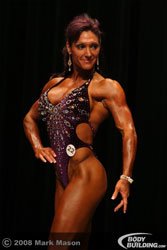 Tracey Greenwood At The 2008 Houston Pro.

Third place was enough for Jersey Girl Erin Riley to secure a spot at the Fitness Olympia. Fourth place winner Bethany Gainey was only three points behind Riley and narrowly missed the O qualification. 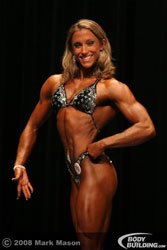 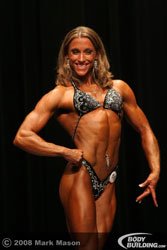 Nicole Rollolazo and Angie English both finished out of the top five but deserve mention. Rollolazo won the forty-five second and the evening fitness routine with high scores. English finished second in both fitness rounds leaving all other competitors in the dust.

The pro figure division boasted some of the loveliest ladies on both sides of the Atlantic. Felicia Romero, who won her pro card at the 2006 USAs, continued her steady climb up the ranks with a first place victory in Houston. Cuban transplant Lenay Hernandez placed a solid second in her first pro outing after receiving her pro card the recent Jr. USAs. A surprised Heather Mae French took home the remaining Figure Olympia qualification as well as a special award for "best presentation" of the show. 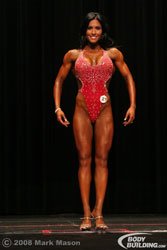 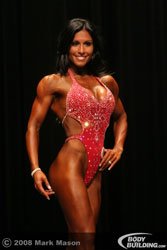 Felicia Romero At The 2008 Houston Pro.

The sexy Serbian Jelena Abbou and the Darling of Dade County, Paola Almerico rounded out the top five. Only a single point separated fifth place Almerico from crowd favorite Huong Arcinas. Another kudo must go to eighth place Bernadette Galvin who had the most charismatic smile of the evening. 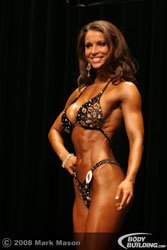 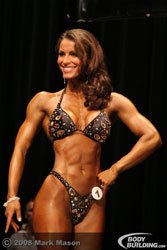 Jelena Abbou At The 2008 Houston Pro.

The success of the revitalized Houston Pro show all but guarantees a larger turnout next year. The Houston along with the Europa SuperShow later this summer makes Texas the hottest place to be for competitors and fans alike.

I have been fortunate to work with some of the top professional bodybuilders, fitness and figure competitors in the sport today...